North America and Europe Snow Blowers Market size is forecast to exceed USD 30 billion by 2024; according to a new research report by Global Market Insights, Inc.

North America and Europe snow blowers (Snow Thrower) market will be primarily driven by increasing motorways connectivity in the region, which is consistently growing over past few years. Traditionally, North America and Europe are known for the heavy snow fall. Motorways connectivity in these regions are increasing substantially, especially in hilly regions where snow fall is generally high. This increased connectivity in these regions is projected to fuel the snow blowers market over the forecast period. For instance, in 2010 total motorways length in the Europe was 71,192 km and it is expected to reach 85,281 km by 2025. With increasing connectivity and motorways length, product demand in the region shall increase over the forecast timeframe.

Different kinds of equipment are used to remove snow. Compared to other equipment, blower is very effective medium to remove snow. The available alternatives to snow throwers include angle plough, spreader, snow pusher and scrapper. These products are available in market at a price comparatively lower than snow blowers, which may hamper product demand over the forecast timeframe. 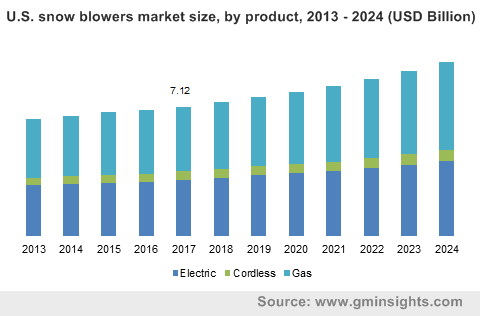 Cordless snow blowers are likely to gain more prominence during the forecast period. This can be attributed to its low cost and high mobility. Owing to low product cost, middle income group consumers can also afford it, thus increasing product demand from this stratum of end-users which in turn will drive cordless snow blower market growth from 2018 to 2024. Unlike electric snow throwers, cordless ones have high mobility and more operational efficiency, which makes it more preferable than electric and gas alternatives.

Among the three power types of snow blowers available in marketplace, two stage snow throwers demand will grow with highest CAGR during the forecast period. Two-stage snow blowers can throw the ice at long distance and are effective in areas receiving heavy snow fall.

In 2017, Europe held the largest market share in snow blowers market. This can be attributed to the high disposable income of people and most of the snow receiving regions are in Europe. Owing to the increasing global warming, snow fall in North America is increasing rapidly. Due to this, North America is projected to expand with significant CAGR during the forecast timespan.

North America and Europe snow blowers research report includes in-depth coverage of the industry, with estimates & forecast in terms of volume in Thousand Units and revenue in USD million from 2013 to 2024, for the following segments: