Home > Pressrelease > Micro LED Display Market worth over $14bn by 2024

Micro LED Display Market size is set to surpass USD 14 billion by 2024, according to a new research report by Global Market Insights Inc.

Increasing demand for high-performance display solutions in advanced applications, such as wearable devices and automotive, will drive the micro LED display industry growth. These energy-efficient devices potentially reduce the size of the wearable devices, thus encouraging the device manufacturers to adopt these components. Furthermore, the technology allows modifications, such as transparency and flexibility, in display systems.

The manufacturers are increasingly investing in the technology development to enhance the functionality of these components. For instance, to produce these components, gallium nitride LED wafers are grown on sapphire substrates. However, some of the manufacturers are investing in research for developing gallium nitride on silicon technology to increase the uniformity in wavelength and lower the inspection costs.

The lack of awareness and inadequate patents in the industry are expected to restrict the market growth in the short-term. Inadequate patents in the industry will lead to the emergence of large number of counterfeit products. Due to the newness of the technology and lack of standard procedures for manufacturing these components, the threat of the counterfeit products is low in the short-term but is expected to increase in the long-term. Lack of cost-effective procedure for the mass production of these components will be one of the major restraining factors for the market. Currently, the manufacturing process is only cost-effective for the small-size displays. However, the manufacturers are working incessantly to develop a methodology for the mass production of these devices in variable sizes. 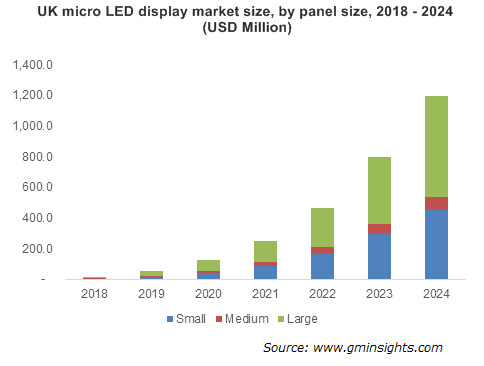 Small panel size will account for 30% of the revenue share 2024 led by the surging demand for small devices such as smartphones, near-to-eye devices, and smartwatches. These components have several advantages over currently used OLED technology such as high degree of luminance, powerful contrast, and low operating temperatures. Moreover, these devices owing to their low power consumption run for longer a life-span as compared to the traditional components. This is encouraging the manufacturers of handheld devices to increasingly implement these components in the devices.

Germany market size will witness considerable growth during the forecast timespan impelled by increasing usage of wearable devices in the country. The consumers are demanding technologically advanced and visually appealing gadgets as wearable devices. Wearable device manufacturers are continuously innovating to develop the product according to the consumer requirements. Micro LED allow manufacturers to develop products, such as smartwatches, making them lightweight, compact, and energy efficient.

Some of the major companies operating in the market are Sony, Samsung Electronics, Apple, Inc., Epistar, Micro Mesa Technologies, Plassey Semiconductor Technology, VerLASE Technology, and Glo AB. The industry is characterized by intense competition among the players for product development such as Apple and Sony. For instance, Leyard Optoelectronics launched a micro LED wall super small pitch of about P0.9. The main application of these components is projected to be indoor surveillance displays, unlike Sony and Apple that are focusing on wearable devices applications.