Global Marine Engines Market size is set to surpass USD 13 billion by 2024, as reported in the latest study by Global Market Insights, Inc.

Shifting trends in the shipping industry accompanied by rise in the global maritime trade volumes is anticipated to drive the marine engines market growth. Increasing adoption of low sulfur fuels owing to government norms for reduction in emissions will drive the product demand. For instance, the IMO, in January 2015, introduced mandates to combat emissions from sulfur & particulate matters (PMs) and limit the SOx emitted across the ECAs to 0.10%, further complementing the industry outlook.

Government policies to reduce maritime pollution has propelled the demand for low emission engines. For instance, the Marine Environment Protection Committee (MEPC) under Annexure VI introduced a directive to limit the NOx emissions by the diesel engines with power output of over 130 kW. Technological advancements in product features to manufacture advanced engines complying with the set standards will stimulate the business growth. In addition, favorable economic trends from the emerging economies is anticipated to boost the industry landscape. 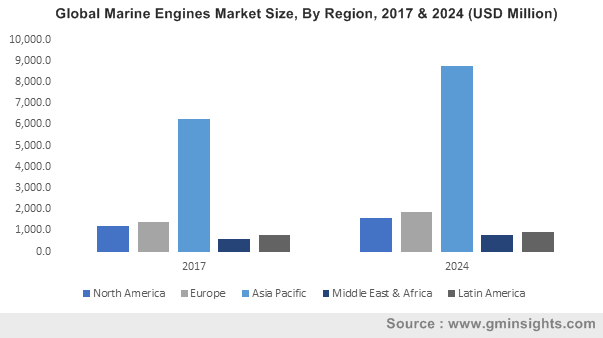 Liquefied Natural Gas (LNG) is expected to witness considerable growth of over USD 2 billion by 2024. The fuel is a supplement for ships and is anticipated to witness a robust increase in demand in the coming years. It emits lesser carbon content by reducing the CO2 up to approximately 25% and is available at a competitive price in commercially viable regions including Europe and North America. Rising global trade activities have led to increased investments in LNG carriers in 2017 resulting in 10% growth in DWT.

Improved standards of living along with increasing disposable incomes are the underline factors attributing the growing demand for ferries and cruises. The low speed engines are widely incorporated for utilization in the merchant, yachts, passenger and commercial vessels strengthening the product installation. In addition, innovation in the propulsion products to improve the efficiency of the engines will stimulate the business landscape.

Ongoing government investments and incentive programs with an aim to strengthen the national security along with advanced shipping line is set to propel the product demand. For instance, in 2019, the U.S. government announced to spend USD 20 billion to improve the U.S. Naval Ships. The rise in maritime trade coupled with growing shipbuilding activities will foster the demand for commercial vessels.

The Middle East marine engines market will witness substantial growth of over USD 772 million by 2024.  Increasing availability of offshore vessels and tankers is the one of the major factors driving the product adoption. The increasing exploration and production activities will stimulate the demand for gas carriers and oil tankers along with drill ships and platform supply vessels.

Marine engines market research report includes in-depth coverage of the industry with estimates & forecast in terms of USD from 2013 to 2024, for the following segments: