Industrial Ethernet Market size is set to exceed USD 70 billion by 2025; according to a new research report by Global Market Insights, Inc.

The rapidly growing adoption of Industrial IoT (IIoT) predominantly among the manufacturing and automotive sectors to improve the efficiency of production processes and supply chain is driving the growth of the industrial ethernet market. Supportive government initiatives and hefty investments to extensively convert traditional grids into smart grids are resulting in the proliferation of the market.

For instance, according to the U.S. Department of Energy, the country has invested USD 8 billion through the Smart Grid Investment Grant Programme between 2010 and 2015. The country has received federal financial assistance for up to 50% of project costs. The investments are anticipated to reach USD 110 billion over the next decade. Large-scale adoption of industrial Ethernet products, such as switches, gateways, connectors, processors, and controllers for structuring industrial networks, is expected to boost the market growth over the forecast timeline. The advent of innovative technologies, such as big data analytics, coupled with the increasing demand for cloud-based solutions in several enterprises across various sectors is escalating the demand for data centers, resulting in the industrial ethernet market growth. 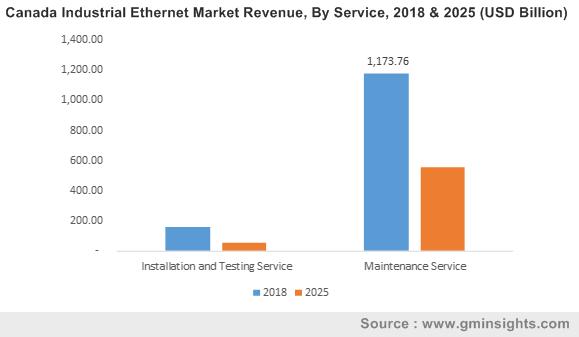 The service segment is projected to exhibit the fastest growth between 2019 and 2025, reporting a CAGR of over 20% owing to the need for effective installation, testing, and maintenance of the network infrastructure to ensure long-term stability. The software solution segment is estimated to grow at a significant CAGR over the forecast timeline owing to its capability to enable network management through the monitoring of industrial Ethernet networks with a varying number of nodes.

The automotive & transport segment is expected to witness an accelerated growth in the industrial ethernet market throughout the forecast timeline owing to the increasing requirement of bandwidth in automobiles. The automobiles are currently transforming from hardware-driven machines to software-driven electric devices, resulting in a significant increase in complexity and weight of wiring harness. Consequently, OEMs are integrating more computer-based systems, connections, and applications to ensure proper connectivity between systems, contributing to an exponential increase in wiring harness, resulting in the third highest heaviest and costliest component in cars. It can significantly reduce the complexity and the cost of wiring in the automotive by providing a single network for connecting all the systems via a central switch.

Gigabit protocol is projected to witness an extensive adoption throughout the forecast period for facilitating connections between various devices such as robots, sensors, PLCs, and other industrial machines. The Gigabit Ethernet predominantly employs optical fiber connection for the transmission of information over long distances with high speeds. It is expected to witness a large-scale adoption between 2019 and 2025. The technology is mostly deployed to increase the data transfer rate between server & client farms and to connect with fast Ethernet switches.

Asia Pacific is growing at the highest CAGR in the industrial ethernet market due to the rapid growth of manufacturing automation applications in the region supported by Industry 4.0. The supportive government initiatives & policies for driving the adoption of industrial automation among the manufacturing and automotive industries are also estimated to have a significant impact on market growth over the forecast timeline.

Industrial ethernet market research report includes in-depth coverage of the industry with estimates & forecast in terms of revenue in USD from 2014 to 2025 for the following segments: