HIV Diagnostics Market size is set to exceed USD 5 billion by 2024; according to a new research report by Global Market Insights.

Growing incidences of HIV infection in developed and developing economies is the key factor driving the HIV diagnostics market growth. According to the UNAIDS in 2017, around 36.8 million people worldwide were living with HIV that included about 35.1 million adults and around 1.8 million children below 15 years of age. HIV prevalence is comparatively higher in low- and middle-income countries as compared to the developed economies. The high prevalence is the result of fertile environment for HIV to spread.  Several factors including lack of access to health care, poor socio-economic conditions, political or economic displacement of communities as well as cultural practices further boost business growth.

Additionally, various government initiatives to increase awareness regarding HIV infection and available treatment options will render positive effect on the HIV diagnostics market. For instance, two major technological and scientific projects, Prevention and Control of AIDS, Viral Hepatitis & Other Serious Infectious Diseases and Development of Major New Medicines were implemented in 2014 in China. These were implemented to conduct research in epidemiology, prevention of HIV affected people from new infections as well as to improve AIDS treatment. Such support from government and non-government organizations will further spur the HIV diagnostics industry growth. However, low degree of penetration for HIV diagnostics in underdeveloped economies due to favorable socio-economic development may hamper the business growth to certain extent. 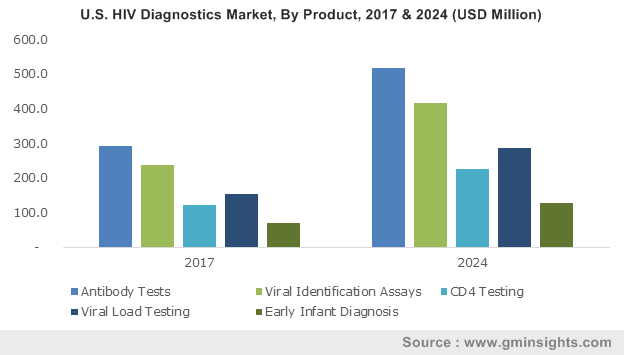 Antibody tests segment dominated the HIV diagnostics market with USD 953.9 million in 2017 and is estimated to show robust growth over the forecast timeframe. Early detection ability of antibody tests including home and rapid tests in HIV infection as compared to tests with oral fluid, will boost the industry size. Increasing awareness towards regular blood test and growing prevalence of HIV symptoms will fuel the business growth over the forecast period.

Viral identification assays segment accounted for considerable revenue share in 2017 and the segment will witness 8.4% CAGR in the coming years. Viral identification enables isolation of HIV and is used to check infection in infants born to seropositive mothers or in people with equivocal serologic studies. Increasing initiatives to develop more improved and efficient techniques of virus identification in above mentioned infants and quantification will further accelerate industry growth.

U.S. HIV diagnostics market dominated North America and was valued at USD 876.8 million in 2017 and is estimated to witness similar trend in the coming years due to increasing prevalence of HIV infections. As per the Centers for Disease Control and Prevention (CDC’s) HIV Surveillance Report, around 1.1 million people in the U.S., aged 13 years and above were living with HIV infection at end of 2015. High healthcare expenditure coupled with favorable regulatory landscape for HIV diagnostics will further spur the market size.

Germany HIV diagnostics market held 20.9% revenue share of Europe in 2017 and is estimated to show lucrative growth over the forecast timeline. The growth is attributed to several efforts by government and non-government organizations such as UNAIDS and World Health Organization (WHO) to spread awareness regarding HIV infection as well as eradication measures. Increasing healthcare expenditure in the country coupled growing awareness among people will further lead to industry growth.

China HIV diagnostics market accounted for significant revenue share in 2017 and is projected to show CAGR of 10.1% during the forecast period. Large patient pool in the country suffering from several chronic illnesses coupled with government support for HIV diagnostics will accelerate the HIV diagnostics business growth in the foreseeable future. Moreover, support from National Development Partners such as ACFIC and Chinese Foundation for Prevention of AIDS will boost industry growth in coming years.

HIV diagnostics market research report includes in-depth coverage of the industry with estimates & forecast in terms of revenue in USD million from 2013 to 2024, for the following segments: