Growing technological advancements due to increased R&D efforts enable fast and cost-effective sequencing of DNA. For instance, whole exome sequencing provides faster results by targeting the protein coding sequences of the genome. Furthermore, new techniques such as microarrays and next generation sequencing increase the accessibility of DNA testing. Furthermore, there is a demand for personalized medicine due to its increased effectiveness and reduced side effects. Genetic testing provides data that can be used to provide targeted treatment. These factors will propel the genetic testing market demand over the analysis timeframe.

Growing adoption of genetic testing in routine clinical care will boost the market demand over the forecast period, driving the business growth. These tests is used in a clinical setting to identify the patient’s predisposition to high risk conditions and provide precision medicine based on genomic factors. Furthermore, initiatives by government organizations and healthcare providers to introduce genetic testing in routine care will drive the market expansion. For instance, Geisinger Health System announced that it would be including genomic sequencing in clinical care to enhance patient outcomes. These factors will spur the genetic testing market growth over the forecast period.

High cost of genetic testing might impede the market expansion in the short run. Furthermore, lack of experienced professionals in the developing and underdeveloped countries could restrict the market growth over the forecast period. 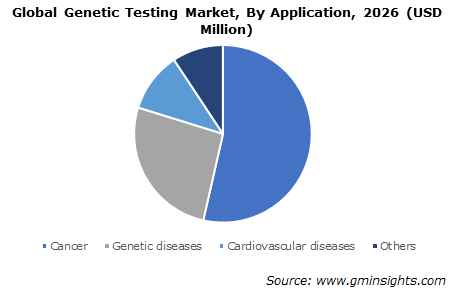 The carrier testing segment held market value of USD 0.7 billion in 2019. Carrier testing can be used to identify the risk of genetic disorders such as hemophilia and sickle cell anemia. Couples with history of genetic disorders choosing to have a child opt for carrier genetic testing. The availability of technologically advanced genetic tests will augment the segment growth. Other types of genetic tests include prenatal and newborn testing, predictive testing, pharmacogenomic testing and nutrigenomic testing.

By application, the market is segmented into cancer, genetic disease, and cardiovascular disease testing. The cancer testing segment was valued around USD 6.8 billion in 2019 and will exhibit robust growth in the future. The growth can be attributed to the innovations in cancer screening tests. Genetic testing is used to estimate the probability of cancer in an individual based on their genome. Furthermore, genetic testing can be used to provide precision treatment and improve patient outcomes. Also, a rising demand for personalized medicine will boost the segment growth over the forecast period, spurring the market expansion.

North America to be the hotbed for genetic testing

North America genetic testing market held about 58% share in 2019 and will witness lucrative growth over the forecast period. A rising geriatric population with an increased incidence of chronic diseases will augment the regional industry expansion. Furthermore, government initiatives will fuel the genetic testing industry growth in North America.

For instance, the National Genome Research Institute (NHGRI) has launched a program, IGNITE (Implementing Genomics In Practice) that will help improve adoption of genetic testing. These factors will fuel the market expansion during the forecast period. Also, presence of research institutes and key market players in the region will drive the market growth.

U.S. dominated the North American market and will exhibit nearly 11% CAGR over the forecast period. High growth can be attributed to the growing geriatric population in the country, coupled with increasing demand for personalized medicine. Furthermore, increasingly unhealthy habits such as a sedentary lifestyle and adoption of smoking will boost the genetic testing market growth.

Few of the leading players in the genetic testing market share are Biocartis, Bayer Diagnostics, BGI, Roche Diagnostics, Qiagen, Siemens, 23andMe, Abbott Molecular, Integragen, Genomic Health, and Celera Genomics. The industry players are utilizing strategies such acquisitions, collaborations, and innovative service offerings to gain a competitive edge and capture market share. For instance, in March 2018, 23andeMe announced the launch of a new genetic testing report that examines the predisposition for type 2 diabetes. This initiative has helped the company expand their customer base and industry share.

Genetic Testing Market
Contact Us  Request Free Sample
Top
Chat with us
We use cookies to enhance your experience. By continuing to visit this site you agree to our use of cookies. More info X