F&B Sterilizing Agent Market size will surpass USD 500 million by 2025; according to a new research report by Global Market Insights.

Sterilizing agent market has been witnessing a consistent growth rate since the last few years and is even forecast to pace its growth in the upcoming era. This steady growth is strongly driven by favorable food & beverage industry throughout the globe followed by surging demand of healthy packaged food items in developed nations as result of economic growth, increasing purchasing power and growing market players in the sector.

On the other hand, there are some factors hindering the market growth due to health issues associated with the chemical compounds used in sterilization process, such as excessive consumption of hydrogen peroxide can cause abdominal pain, diarrhea, irritation in skin, and many other health problems when consumed in large oral doses. Strict government regulations for its utility in food industry is also a pitfall for the sterilizing agent market. 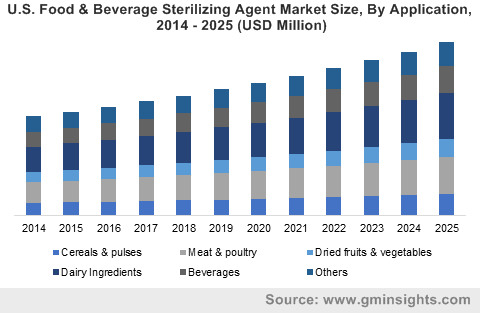 Sterilizing agents are used by the name of different products in the food industry. Majorly used sterilant is hydrogen peroxide followed by peracetic acid. The reason for the compound being widely accepted as a sterilizing agent is its strong oxidizing ability which makes it ideal to be used in sterilizing operations. Its chemistry is dominated by the nature of its unstable peroxide bond.

Food sterilization is used in ample number of industries including cereals & pulses, meat & poultry, beverages, dried fruits & vegetables, dairy ingredients and many other segments. Dairy ingredients segment accounts to be the largest application and generated revenue close to USD 80 million in 2018. This is attributable to its growing need in milk and milk-based products packaging followed by meat and poultry products where sterilant are used to eliminate harmful microbial organisms such as spore forms, fungi, bacteria, viruses, prions in beef, pork, chicken and other meats.

North America has registered itself as the largest industry for F&B sterilizing agent market. Such a huge share is due to the presence of large number of manufacturers and suppliers of the product in countries like USA and Canada making the region supported by its growing food and beverage industry.

Sterilizing agent are chemical compounds used in eliminating contamination of food items. These chemical compounds can be found in any company’s product portfolio which in turn is making the overall market quite competitive. The major players in the industry are Solvay, Steris, Peroxy Chem, Evonik Industries, Mitsubishi gas etc. These companies are adopting various techniques to differentiated them from others and establish themselves as market leader. For instance, Mitsubishi Gas Chemical Company, Inc. has announced to establish new plant for producing and distributing super-pure hydrogen peroxide to be used for sterilizing and other applications.

Sterilizing agent market research report includes in-depth coverage of the industry with estimates & forecast in terms of volume in tons & revenue in USD thousand from 2014 to 2025, for the following segments: