Cellular Vehicle-to-Everything (C-V2X) Market size is set to exceed USD 800 million by 2025; according to a new research report by Global Market Insights, Inc.

The C-V2X market growth is characterized by technological advancements in vehicle telematics & infotainment systems and the growing emphasis on strengthening the regulations for driver safety by government institutions. Increasing number of fatalities in road accidents is prompting transport departments to undertake new initiatives to minimize the accidents by allowing vehicles to communicate with their surroundings. According to the World Health Organization’s global status report on road safety 2018, the number of annual road traffic fatalities reached 1.35 million. The growing uptake of vehicles is leading to an increase in traffic on freeways as well as in urban and rural areas. This has led government institutions to frame new legislation to curb the impact of road accidents by strengthening the norms for driver safety.

Also, increasing investment on the development and testing of autonomous & connected cars is expected to facilitate rapid deployment of C-V2X solutions on a large-scale over the forecast timeline. For instance, in May 2019, Nissan unveiled its second-generation PrePilot system for its semi-autonomous driving technology. The company pledged truly hands-free driving availability as early as the fall of 2019 in Japan. Such initiatives are likely to accelerate the deployment of fully autonomous vehicles equipped with modern C-V2X communication solutions on-board. 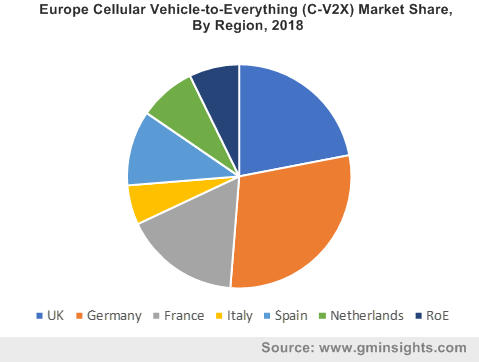 The Vehicle-to-Infrastructure (V2I) segment is expected to grow at an impressive CAGR of over 10% in the C-V2X market during the forecast timeline due to the growing emphasis on developing smart city projects around the world. Within the smart urban infrastructure, various sensors and centrally controlled traffic signals regulate traffic flows through cities. With communication units installed in both the cars and infrastructure components, drivers can get critical alerts such as curve speed warning, red light violation warning, railroad crossing violation warning, reduced speed zone warning, and stop sign gap assist. Such warnings can play a critical road in preventing accidents as well as violations of traffic regulations.

The C-V2X hardware segment is projected to dominate the cellular vehicle-to-everything market over the forecast period due to large-scale deployments of hardware components such as chipsets, antennas, and roadside units. Chipsets play an important role in facilitating cellular communication between vehicles and infrastructure components. Leading chipset manufacturers are investing significantly in developing chipsets to enable C-V2X communication. For instance, in November 2018, Quectel launched its automotive-grade C-V2X module AG15. The module features the latest Qualcomm 9150 C-V2X chipset. Qualcomm launched the first C-V2X chipset (9150) in November 2017 based on the 3GPP Release 14 specifications.

The collision avoidance segment is projected to hold a majority C-V2X market share of around 30% by 2025. With extensive research being conducted on Intelligent Transportation Systems (ITS), the use of inter-vehicle cooperative (active) safety systems is being increasingly studied & tested in vehicles to avoid vehicle collisions. Industry and government consortia, such as the Vehicle Infrastructure Integration Consortium (VIIC), Crash Avoidance Metrics Partnership (CAMP), and the Car2Car Communications Consortium in Europe, are conducting advanced research in collision avoidance technologies using V2V communication technology. Such initiatives are expected to facilitate large-scale commercialization of these systems in the market.

The commercial vehicle segment is attracting more R&D and investments for autonomous driving technology to reduce fleet management costs in the transport sector. V2V communication technologies are being extensively tested and deployed for platooning applications in commercial fleets, wherein multiple trucks drive in unison in very close proximity. Peloton, a Silicon Valley company developing this technology observed that it reduces fuel consumption for the lead trucks by 4.5% and the following trucks by 10%. V2V proves to be an excellent underlying technology that enables platooning in an effective manner for commercial fleets driving for long distances.

The Europe C-V2X market held the highest market share of around 40% in 2018 and will maintain the market dominance over the forecast period. The key factors influencing the market growth are large-scale initiatives by the automotive industry associations and government authorities for the rapid testing and deployment of autonomous & connected car technologies. The EU has allocated a budget of around USD 353 million from the EU's framework program for research and innovation, Horizon 2020, to support R&D on automated vehicles. Such initiatives will accelerate the incorporation of C-V2X solutions in commercial as well as passenger vehicles in the region.

The key players operating in the global cellular vehicle-to-everything market are focusing on collaborations and partnerships for testing C-V2X solutions. For instance, in June 2018, Ford, Panasonic, Qualcomm, and the Colorado Department of Transportation (CDOT) announced a plan for the deployment of C-V2X technology at Panasonic’s CityNOW headquarters in Denver on select roadways. Under the deployment, Kapsch TrafficCom provided Roadside Units (RSUs) and Ficosa International provided C-V2X Onboard Units (OBUs).

Cellular Vehicle-to-Everything (C-V2X) Market research report includes in-depth coverage of the industry with estimates & forecast in terms of revenue in USD from 2018 to 2025 for the following segments: