Animal Vaccines Market size is set to surpass USD 11.5 billion by 2027, according to a new research report by Global Market Insights Inc.

The increasing demand for animal protein including meat, eggs, fish, and dairy products in human food is expected to boost the demand for animal vaccines, thereby driving the market growth substantially. As per the World Health Organization report, the annual meat production is estimated to reach 376 million tonnes by 2030. The demand for dairy products is also surging owing to the rising population, urbanization, and increasing health awareness among others. Thus, rising consumption of animal products is projected to increase the demand for veterinary vaccines to prevent the occurrence of zoonotic or food-borne diseases, thereby propelling the market expansion.

The Growing prevalence of foodborne and zoonotic diseases across the globe will expand the animal vaccines market value. According to the Scientific Reports 2018 article, a study was conducted to map the prevalence of bovine viral diarrhea virus (BVDV) among farm animals from 1961 to 2016. The global prevalence of BVDV among cattle ranged from 0.8% to 1.6% and is predicted to surge in North America. Similarly, the Springer article published in 2019, reported that more than 77% of the cattle herds were tested BVDV antibody positive in China. According to the Veterinary World 2021 article, the pooled prevalence of anthrax was approximately 28% across the globe. As per the World Health Organization report 2021, rabies is a vaccine-preventable viral illness in dogs that occurs in over 150 countries and causes an anticipated cost of USD 8.6 billion every year worldwide. 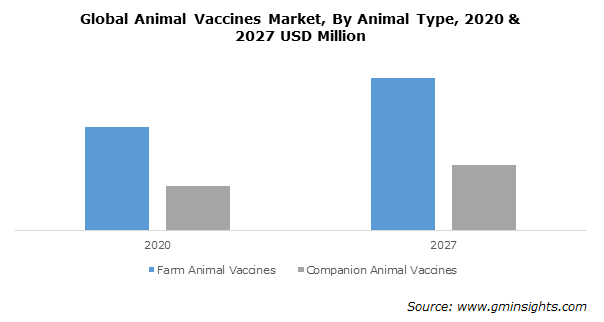 The companion animal vaccines market held 30% of revenue share and was valued at USD 2.36 billion in 2020 led by the several factors including favourable government initiatives to improve animal health, rising pet adoption rates for companionship, etc. As per the article published in 2021, the surveillance program embracing pet-associated food borne and zoonotic diseases epidemiology has been implemented in Brazil to curb the burden of disease. In the UK, various initiatives have been taken to provide consistent funding that is useful for vaccination programs of animals. In June 2021, the UK government announced the funding of around USD 25 million for developing and manufacturing animal vaccines.

The recombinant vaccines segment is anticipated to reach USD 453 million by 2027. Recombinant animal vaccines offer several benefits including elimination of the post-vaccination reactions, enable insertion into multiple carriers, low production cost, enhanced stability for transportation & storage, etc. Recombinant DNA technology has proven important for the production of animal vaccines and offers unprecedented control over the genetic material. Thus, the veterinary vaccine manufacturers are emphasizing on the application of recombinant DNA technology in various aspects of food borne and zoonotic disease management. Rapid advancements in genetic engineering have facilitated in surging the application of these techniques in animal vaccines production. Due to recent developments, recombinants vaccines that are of zoonotic importance are safe to handle, mimic a natural infection, and induce potent immunity among others.

The bacterial vaccines segment accounted for USD 2.29 billion in 2020 impelled by the increasing prevalence of bacterial infection among animals, supportive government initiatives, and growing awareness pertaining to bacterial infection. As per the WHO survey performed in 2018, Salmonella bacteria was prevalent in domestic and food animals such as cattle, poultry, pigs, birds, dog, cat, reptiles, etc. Over the past few years, public and private organizations in developing countries have taken massive efforts to upsurge awareness for animal vaccination.

The oral vaccines segment captured 16% of the animal vaccines market share in 2020 and will cross USD 1.91 billion by 2027 owing to the fact that oral vaccine administration offers several advantages such as eliminating the risk of transmitting blood-borne pathogens, improve vaccine efficacy by increasing accessibility & coverage, and being easy to administer among others. The oral route is one of the most preferred routes for vaccine administration attributed to the convenience of vaccine administration, efficient & cost-effective form of preventing zoonotic diseases, easier to store & transport, etc.

Germany animal vaccines market is projected to hit USD 614 million by 2027 due to the increasing demand for animal protein in human food, rising awareness pertaining to farm & companion animal health, and favorable government initiatives among others. In the first half of 2021, around 28.3 million cattle, goats, horses, pigs, and sheep were slaughtered in commercial slaughterhouses in Germany. Thus, as meat production rises, there is a huge demand for animal vaccines to ensure the provision of healthy & nutritious food and protect livestock against infectious diseases. The Germany government has employed numerous initiatives including the animal welfare labelling program to inform consumers about overall animal health with the help of a government animal welfare label. These initiatives are adopted by both government and private organizations that will upsurge the business growth.