Aircraft Window Frame Market size is estimated to surpass USD 180 million by 2025; according to a new research report by Global Market Insights Inc.

Rising aircraft production globally on account of improving air passenger travel along with rising demand for low cost carriers are driving the aircraft window frame market share over the projected timeframe. The rising focus on airliners to incorporate maximum seats and windows in aircrafts for improving operational efficiency are further expanding the business share over the study timeframe. 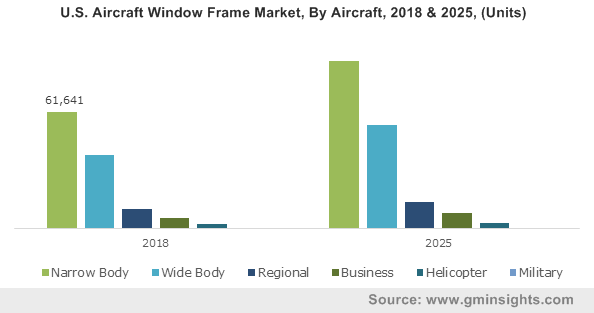 Advancements in manufacturing technologies for reducing overall costs and time required to produce parts and components are positively influencing the aircraft window frame market share over the projected timeframe. The advent of 3D printing and additive manufacturing technologies are gaining prominence in the industry. For instance, in 2018, STELIA Aerospace announced the development of 3D printed aircraft components using the Wire Arc Additive Manufacturing (WAAM) technology.

The commercial aircrafts are expected to dominate the aircraft window frame market share over the projected timeframe. This can be attributed to the increasing air travel owing to improved air network routes and tourism sector. Moreover, aircraft manufacturers are launching their advanced new aircrafts for supporting the rising air travel demand globally. For instance, in 2016, Boeing introduced its advanced narrow body aircraft, the 737 Max with focus on efficiency.

Military segment will account for a considerable share in the aircraft window frame market. This can be attributed to the rising defense budgets across the globe. Moreover, government organizations are focusing on improving their jet fleets for improving their national security and gaining an edge during wars. For instance, in 2018, the U.S. defense budget accounted for around USD 640 billion.

Cabin window frame are anticipated to account for a significant share owing to the rising demand for narrow body aircrafts globally. The lower fares along with improved air travel routes are expected to accelerate the segment share over the projected timeframe. Moreover, the rising focus of airliners to incorporate maximum seating capacities in aircrafts for improving operational efficiencies are providing a positive outlook for the aircraft window frame market share expansion.

North America is anticipated to dominate the aircraft window frame market share over the projected timeframe. This can be attributed to the presence of multiple aircraft manufacturers across the region along with suppliers and distributors focusing on manufacturing advanced and light weight components. Moreover, multiple research projects and programs related to the aviation industry along with the development of light weight components are further gaining prominence across the region. For instance, in 2019, GE announced the development of 3D printed aircraft components and parts for the Boeing 777x aircraft.

Aircraft window frame market research report includes in-depth coverage of the industry with estimates & forecast in terms of volume in units and revenue in USD million from 2013 to 2025, for the following segments: