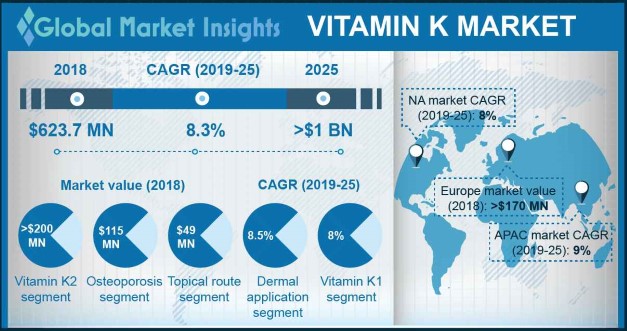 Growing number of clinical research activities related to development of vitamin K products in developed region will positively stimulate industry growth over forecast timeframe. Researchers and scientists are focusing on role of vitamins in infants as well as adults. Several institutes in these regions are engaged in studying bioavailability and intestinal absorption of menadione and phytonadione that assists healthcare professionals to understand the metabolism process. Additionally, scientists have developed medications that aids in treating infants suffering from bleeding disorders. As a result, increasing number of research activities will surge demand for vit-K that will exceed business revenue in forthcoming future.

Lifestyle and dietary changes leading to deficiency of vitamin K in developed as well as developing countries will prove beneficial for the industry growth in coming years. Sedentary lifestyle and massive consumption of junk food make people vulnerable to chronic conditions that results in vitamin deficiencies. Menadione and phytonadione are fat soluble substances and are vital for development of teeth and bones. Moreover, it activates blood clotting and coagulation-inhibiting factors. Thus, people suffering from coagulation disorders due to sedentary lifestyle and unhealthy diet patterns are suggested to consume menadione and phytonadione supplements as their daily part of diet. Aforementioned factors will accelerate the industry growth. However, side effects associated with medications may hamper vitamin K market growth to certain extent.

Vitamin K1 segment is anticipated to witness around 8% growth over analysis time frame. Vitamin K1 has crucial role in numerous health functions, and it acts as a cofactor in development of bones. Production of osteocalcin depends on phytonadione that is most essential in incorporating calcium phosphates in bones. Additionally, vitamin K1 has therapeutic application and has pivotal role in prevention of vitamin K deficiency. Vitamin K1 is available in several dosage forms such as injections, powders and tablets to enable easy administration in patients. Aforementioned factors will prove beneficial for vitamin K market growth in coming years.

Vitamin K2 segment accounted for more than USD 200 million in 2018 and it is anticipated to witness substantial growth in forthcoming future. Lucrative growth can be attributed to increasing application of vit-K2 in coronary heart disease, stroke and other cardiac diseases. Most of the available sources of vitamin K2 such as fermented foods and animal liver, that are inefficient to meet required daily dietary need of vitamin K2. Vitamin K2 helps in restoring blood flow, reduce risk of high blood pressure and lung embolism. As a result, demand for vitamin K2 medications will remain high throughout the forecast timeframe.

Osteoporosis segment was accounted for around USD 115 million in 2018 and it will grow significantly in near future. Osteoporosis affects millions of people across the globe causing decreased quality of life, huge financial burden and increased disability-adjusted life span. It is caused due to deficiency of vitamin K. Thus, it is essential for gamma-carboxylation of osteocalcin that maintains bone mass. Moreover, recent studies demonstrated positive effect of vitamin K in treating osteoporosis and fractures in women suffering from menopause. As a result, increasing prevalence of osteoporosis will augment its demand in forecast period, thereby, propelling segment growth of the market.

Vitamin K-dependent clotting factors deficiency (VKCFD) segment is expected to witness around 6.5% CAGR throughout analysis timeframe. VKCFD is an autosomal recessive disorder and found frequently amongst consanguine married couples. Moreover, people suffering from VKCFD come across symptoms such as serious bleeding episodes, easy bruising, mild hearing loss and skeletal abnormalities. Vitamins has crucial role in VKCFD treatment and is given by pills or injectables to patients that helps in controlling symptoms of genetic combined deficiency. Thus, effective treatment obtained through vitamin K in treating VKCFD will drive segmental growth in near future. 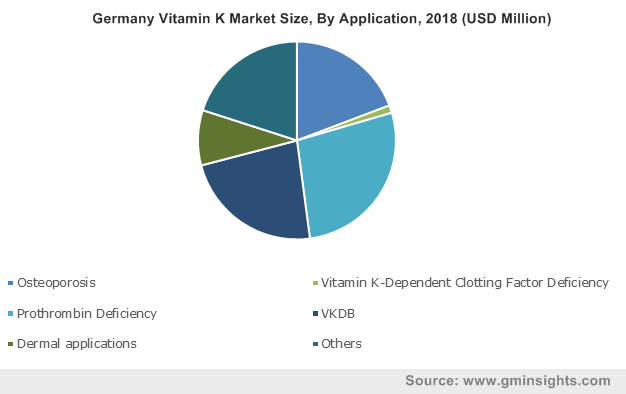 Oral segment of vitamin K market was accounted for more than USD 400 million in 2018 and it is anticipated to witness tremendous growth in forthcoming future. Oral route of administration is most preferred for delivery as it serves to be the most effective and safe route of administration. Oral formulations possess high degree of drug stability fostering the demand of oral formulations. Furthermore, advantages offered by oral route such as ease of administration, non-invasive and cost-effective alternative will further spur the segment growth.

Parental route of administration segment is expected to witness around 9% growth during the forthcoming years owing to advantages associated with parenteral administration over alternative routes of administration. Parenteral formulations surpass first pass metabolism responsible for degradation of drugs in liver. Improved bioavailability of the drug thus enables quick delivery at specific site of action with required dose. Above mentioned factors will drive the segment growth of vitamin K market.

North America market is anticipated to witness around 8% growth during the forthcoming years. Increasing prevalence of vitamin K associated diseases such as neonatal bleeding, osteoporosis, arthritis, diabetes and vascular calcification will serve to be major positive impact rendering factor in the industry growth. Factors such as sedentary lifestyle, consumption of unhealthy food and lack of exercise will trigger the risk factors associated with the above-mentioned diseases thereby, fostering regional growth.

Europe vitamin K market accounted for more than USD 170 million in 2018 and it will grow significantly in coming years. As per the U.S. Institute of Medicine, Europeans have much lower menadione and phytonadione in their intake. Lack of vitamin increases postmenopausal bone loss and arterial calcification especially in patients suffering from chronic renal disease and diabetes. Moreover, menadione and phytonadione level decreases with the age and its intake is beneficial for elderly people. Moreover, it also further reduces fracture risk caused due to poor bone mass and it is crucial nutrient for osteoporosis management. This scenario proves beneficial as it increases demand for injectables and pills thereby, escalating regional growth in forthcoming years. 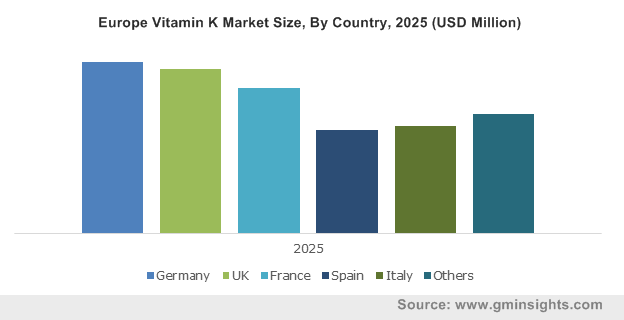 Vitamin K market can be traced back to early 1900’s. In 1929, vit-K was discovered as part of experiments on sterol metabolism associated with blood coagulation. In 1940s it was recognized as widely used for clinical settings. Later, in 1975 scientists published mechanism of vitamin cycle that is vital for activity of carboxylase enzyme. After extensive research, in 1989 a study was published on repercussions of vitamin deficiency that it distorts ratio of carboxylated osteocalcin to serum uncarboxylated. In 2006, scientist Tsugawa published that MK-7 is form of vitamin K found in blood serum of women having lower risk of bone fractures. Shortly after this publishing, in 2009, Summeren demonstrated that vit-K increases carboxylation in healthy children. As a result, these findings created need for manufacturing vit-K supplements for treating several diseases associated with its deficiency. Vitamin K industry is in budding phase and industry players have several opportunities to cater patient’s demand in developing and underdeveloped regions.

The market size of vitamin K surpassed USD 623 million in 2018.
The industry share of vitamin K is expected to witness 8.3% CAGR from 2019 to 2025.
Increasing number of clinical researches and developments pertaining to Vitamin K products across the emerging economies worldwide, is potentially fueling the adoption of Vitamin K.
Vitamin K1 offers umpteen health functions and essentially acts as a cofactor in the development of bones, impelling the market revenue growth in the near future.
Rising number of osteoporosis diseases globally has necessitated the consumption of Vitamin K products to maintain bone mass.
North America is anticipated to portray immense demand for Vitamin K owing to the mounting prevalence of Vitamin K associated diseases like arthritis, diabetes, osteoporosis etc., along with consumption of unhealthy food.
Customize this Report
Inquiry Before Buying