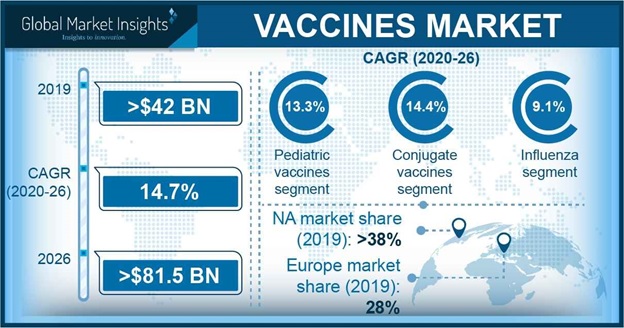 Increasing investment towards development of new vaccines will drive the global vaccines market over the coming years. For instance, researchers at Scripps Research Florida has been successful in developing a non-traditional vaccine to defeat SIVmac239 viral strain nicknamed as the ‘death star’. The non-traditional vaccine developed by the researchers provides durable protection to uninfected individuals from multiple forms of HIV stimulating the demand for the vaccine. Additionally, growing incidence of various infectious diseases and rising awareness about early disease diagnosis and prevention has stimulated demand for protective vaccines, hence further boosting business growth.

Grassroots campaigns organized in various cities and villages of India helped in reducing number of polio cases considerably from March 2014 in the country. Grassroot campaigns enabled oral administration of polio vaccine to as many children as possible, escalating the immunisation levels significantly against Polio. Commencement of such campaigns will rise immunization levels as well as support the industry growth over the forecast timeline.

Immunization helps in preventing nearly 2 to 3 million deaths resulting from various diseases including influenza, tetanus, diphtheria, measles, pertussis and others. Furthermore, as per the WHO, more than 1.5 million deaths can be prevented owing to improvement in global vaccination coverage. In 2018, around 116.3 million children under the age of 1 year received three doses of diphtheria-tetanus-pertussis (DTP3) vaccine globally. With increasing administration of vaccines, the vaccines business will expand significantly over the upcoming years.

Limited coverage for vaccination coupled with prohibitive cost related to transportation and storage of vaccines will negatively impact the industry expansion to certain extent in the near future. Moreover, stringent government regulations for product approval will prolong the process of new product introduction in the market, thereby slowing down the market growth. 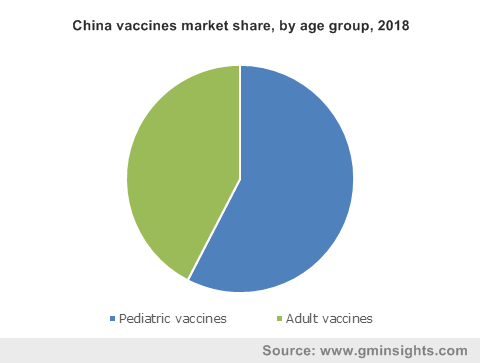 Adult vaccines market will witness robust growth of more than 9.5% during the forecast period. Rising awareness about vaccine preventable diseases among adult population coupled with government’s numerous efforts to increase adult immunization rate will drive the adult vaccines growth over the upcoming period. Rise in demand for vaccines against influenza, tetanus, Shingles, human papillomavirus (HPV), varicella (chicken pox) and others including Hepatitis B, meningococcus and pneumococcus vaccines among adults will elevate the business growth.

Recombinant vaccines market accounted for USD 8.5 billion in 2018 and is projected to witness significant growth during the analysis period owing to less side-effects of these vaccines in comparison to conventional ones leading to high adoption and demand of recombinant vaccines. Recombinant vaccines are largely used in animals for prevention of diseases such as pneumonia, foot and mouth disease, septicaemia and pox disease, that will further support the business growth.

High demand of recombinant vaccines to reduce incidence of malaria, swine flu, Ebola virus, cancer, Zika virus, and others coupled with good immune response delivered by these vaccines will drive the segmental growth. Developments in the field of molecular biology and genetic engineering will positively impact the growth of recombinant vaccines market.

The Human Papilloma Virus (HPV) vaccine market is estimated to witness over 8.0% CAGR during the forecast period owing to rising incidence of cervical cancer and growing awareness about preventive measures. The U.S. FDA has approved three vaccines namely, Gardasil 9, Gardasil, and Cervarix for prevention of infection with disease causing HPV types. High adoption of Gardasil has benefitted Merck significantly. With growing investment in R&D, the HPV vaccines industry will flourish over the foreseeable period.

Influenza vaccine market is anticipated to grow significantly during the forecast timeframe to reach USD 6.1 billion by 2025. Significant reduction in number of hospitalizations due to administration of flu vaccine has stimulated the growth of influenza vaccine industry. According to the CDC data, flu vaccination prevented around 5.3 million influenza illnesses, 85,000 influenza associated hospitalizations and nearly 2.6 million disease associated medical visits in the year 2016-2017. 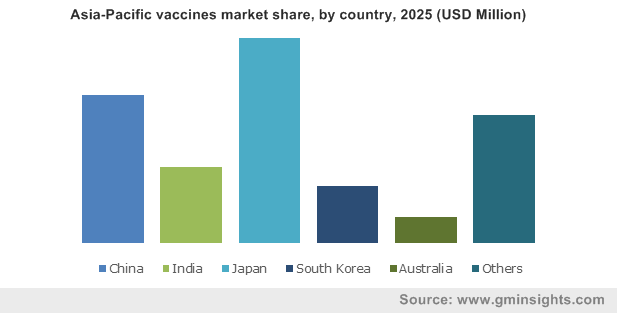 Increase in prevalence of infectious diseases including measles in France have stimulated the demand for vaccines in the country resulting in more than 8.5% CAGR during the forecast period. Furthermore, numerous efforts undertaken by the French health bodies to create awareness about vaccines through social media platforms including Facebook, Twitter and LinkedIn have stimulated the adoption of vaccines in France.

Indian market accounted over 10% revenue share of Asia Pacific vaccines industry in 2018 owing to high incidence rate of infectious diseases and other chronic conditions in the country. Growing geriatric population base along with numerous initiatives undertaken by the government of India to expand provision of vaccines in the country will positively impact the business growth. Companies operating in the vaccines market are focusing on grabbing untapped market potential in the country, thereby propelling the market growth.

Vaccination is considered as a proven and one of the cost-effective strategies for reducing child mortality resulting due to various infectious diseases. All countries have an immunization programme to provide selected vaccines to targeted beneficiaries including the infants, pregnant women and children. Increasing focus on vaccination for adults to prevent incidence of fatal disease such as cancer and HIV will boost the vaccines industry growth. Technological advancements including the development of in-situ vaccination technique to treat various forms of cancer will advance the business growth. High influence of organizations such as the UNICEF on procuring the vaccines at lower prices in several countries will positively impact the vaccines industry growth. Increasing sales of certain vaccines such as Gardasil and Gardasil 9 manufactured by Merck has benefitted the company significantly as well as stimulated the new product development process, thereby intensifying the industry rivalry.