Ultralight and Light Aircraft Market size exceeded USD 4.8 billion in 2019 and is estimated to grow at over 8.9% CAGR from 2020 to 2026. Ultralight and light aircrafts are small aircrafts designed for use in recreational sports, pilot trainings, survey & research, agriculture, and business travels. 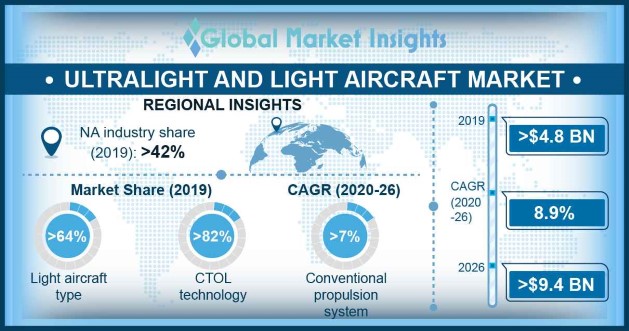 These aircrafts are available in several categories ranging from single engine piston aircrafts to advanced multi engine aircrafts. Lower ownership costs along with ease in flight operations are the major factors likely to influence the ultralight and light aircraft market growth over the forecast timeframe. Growing pilot training institutions coupled with the proliferation of certification courses for hobby flying activities are expected to provide lucrative opportunity for the market expansion.

Advancements in farming techniques and growing usage of ultralight and light aircrafts in agriculture are escalating the product demand. According to the National Agricultural Aviation Association’s (NAAA) 2019 survey, the agricultural aviation business treats around 127 million acres of cropland aerially.

Rising R&D investments along with collaboration of several aircraft and component manufacturers to develop new technologies for urban air mobility solutions will provide lucrative opportunity for the industry expansion.

Growing concerns for pilot and passenger safety owing to several accidents of these aircrafts are posing a major threat for the industry growth. According to the National Transportation Safety Board (NTSB), in 2018, majority of the aviation deaths in 2018 took place during general aviation operation and reached to 381 from 331 in 2017.

However, the ultralight and light aircraft manufacturers are engaged in improving passenger safety with the integration of advanced technologies that are expected to enhance passenger safety significantly. For instance, in October 2019, Cirrus Aircraft introduced Safe Return, an emergency auto-land system. The system converts the manned aircraft into an autonomous vehicle in case of emergency and navigates the aircraft to the nearest suitable airport for landing.

Light aircraft segment dominated more than 64% of the ultralight and light aircraft market share in 2019 due to the increasing demand of small business jets from several industries. Growing popularity of private jets along with the requirement to enhance safety, performance, and comfort are major factors driving R&D investments in the sector.

Several aircraft manufacturers are developing small single engine aircrafts and jets with increase performance and aesthetics of aircrafts that will further support the industry demand. 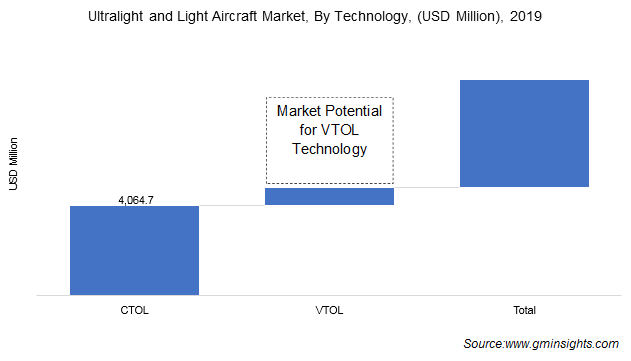 Conventional Take-Off and Landing (CTOL) technology held 82% of the ultralight and light aircraft market share in 2019 on account of the availability of several models with varied power output and price range. Technology advancement along with growing general aviation airport infrastructure across the globe will propel the product demand during the forecast timeframe.

For instance, in May 2016, the State Council of China announced its plans to support the lower altitude airspace for civil aviation along with facilitating over 500 airports to support small aircraft fleet in the country by 2020. However, growing technology advancements along with space constraint in near future will observe lucrative opportunity for VTOL technology.

Growing business travels along with rising popularity of air charter services are the major factors for generating higher revenue from civil and commercial applications. Increasing recreational spending coupled with growing tourism are further boosting the market revenue. Several developed economies including UK and the U.S. are planning to form regulatory framework for Urban Air Mobility (UAM) that will provide lucrative opportunity for the industry value. 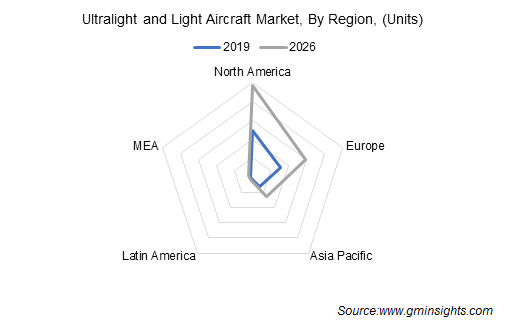 Ultralight and light aircraft market research report includes in-depth coverage of the industry with estimates & forecast in terms of volume in units and revenue in USD million from 2016 to 2026, for the following segments:

The market size of ultralight and light aircraft was surpassed USD 4.8 billion in 2019.
The industry share of ultralight and light aircraft is anticipated to grow at around 9% CAGR between 2020 and 2026.
North America holds significant market share of over 42% impelled by rising recreational aircraft sport activities and greater flexibility offered by these aircrafts as compared to passenger aeroplanes.
Conventional propulsion system will showcase considerable growth of more than 7% in the market through 2026 owing to price affordability as well as limited alternatives.
Some of the major industry participants include Costruzioni Aeronautiche TECNAM S.p.A., Cirrus Aircraft, Pilatus Aircraft Ltd, Piper Aircraft, Inc., Textron Inc., and Autogyro GmbH.
Customize this Report
Inquiry Before Buying