Trichlorosilane Market size exceeded USD 4.84 Billion in 2021 and is estimated to grow at a CAGR of around 10.8% between 2022 and 2028.  Growing consumer awareness regarding the importance of harnessing alternate, non-conventional sources of energy such as solar energy is expected to raise product demand for manufacturing polycrystalline silicon for solar industry. 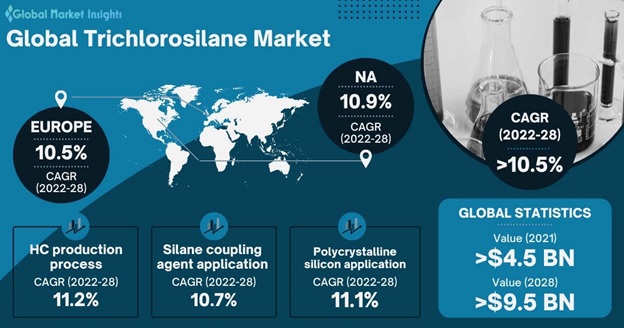 Growing concerns regarding depletion of conventional sources of energy and growing consumer awareness regarding sustainability of the environment is likely to raise the demand for trichlorosilane for manufacturing polycrystalline silicon. Increasing demand for polycrystalline silicon from the solar industry should escalate product demand and promote the growth of the trichlorosilane market over the forecast period.

Remarkable attributes of silicon resin such as its high heat resistance, weatherability, and dielectric properties, among others is expected to raise its demand from different end-use industries including construction, transportation, paints & coatings, and electronics, among others. Widening application scope of silicon resin is expected raise the trichlorosilane market share over the forecast period.

However, the volatile, flammable & corrosive nature of trichlorosilane is expected to hamper the growth of the market to some extent over the forecast period. The high-risk factor of occurrence of accidents involved in manufacturing trichlorosilane is expected to further restrict market growth during the forecast period. Moreover, high production cost & price of the final product owing to the volatile nature of the product & increased cost of handling should further decline global trichlorosilane market growth. 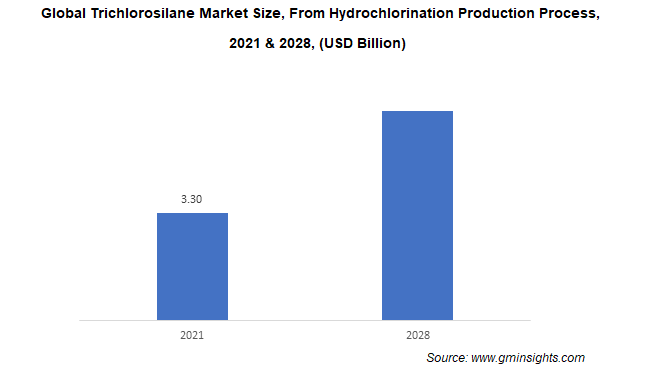 Moreover, this newly developed technology optimises on the use of auxiliary equipment, piping, structure, valves, and instruments for trichlorosilane production, which further helps in overall production cost reduction. High production efficiency ensured by hydrochlorination (HC) process is expected to further drive the attention of manufacturers towards use of this advanced technology, in turn fostering growth of the global trichlorosilane market over the forecast period.

Growing demand for silane coupling agents from different applications including surface treatment & modification, adhesives, paints & coatings, and resin modifications, among others should boost the product demand 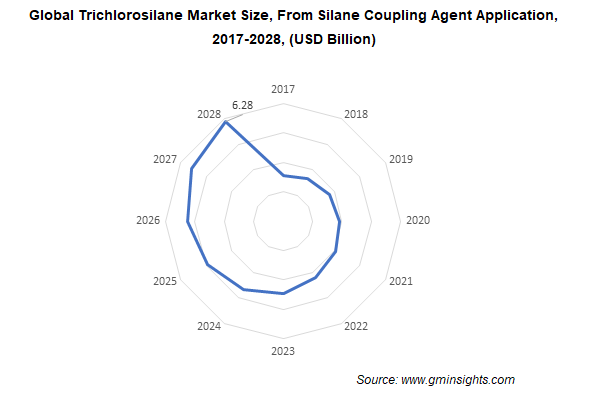 Global trichlorosilane market from silane coupling agent application is anticipated to surpass USD 6.28 Billion by 2028, growing at a CAGR of 10.7% over the forecast period. Remarkable attributes of silane coupling agents such as its heat resistance, water resistance, weatherability and improved durability of resins, among others is expected to raise its demand for surface treatment of different materials.

Rising demand for silane coupling agents from paints & inks and film coating applications should further raise the demand for trichlorosilane from manufacturing paints & coatings. Furthermore, the excellent properties of silane coupling agents such as its high adhesion, water resistance and alkali resistance, among others is likely to raise its demand from adhesive application, in turn propelling global trichlorosilane market growth over the forecast period. 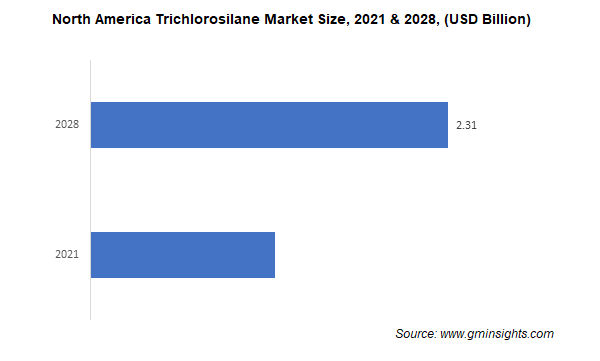 North America trichlorosilane market is poised to surpass USD 2.31 billion by 2028, growing at a CAGR of 10.9% owing to the increasing efforts by solar manufacturers to increase the efficiency of solar photovoltaic cells in the region. the region. Growing consumer awareness about undesirable effects of increasing carbon dioxide emissions on the environment due to the use of conventional fossil fuels, such as coal, oil, and natural gas, for generating electricity is expected to increase consumer acceptance of solar systems.

Rising demand for solar equipment and arranging solar photovoltaic installations in smaller configurations on mini grids to provide electricity to residential areas on a large scale should raise the demand for trichlorosilane from solar applications over the forecast period. Trichlorosilane is used to manufacture polycrystalline silicon which finds demanding applications in the solar industry.

Furthermore, increasing efforts by the U.S. government in the form of favorable policies such as the Renewable Electricity Production Tax Credit (PTC), the Investment Tax Credit (ITC) and the Residential Energy Credit, among others to encourage the use of solar systems is expected to further propel market growth. Annual new installations of solar energy capacity in the U.S. increased from 10.60 gigawatts in 2017 to 19.20 gigawatts in 2020, which shows a considerable growth potential for the trichlorosilane market in the region over the forecast period.

The global trichlorosilane industry is competitive with Evonik Industries, American Elements, SIAD Spa, Gelesa Inc. and Mitsubishi Polycrystalline Silicon America Corporation being some of the major players in the market. Players in the market are focusing on acquiring other market participants to further advance their technical know-how and manufacturing processes and strengthen their position in the global market.

For instance, in September 2020, Hemlock Semiconductor Operations announced the acquisition of the trichlorosilane business of DuPont. The strategic acquisition would enable the company to seek advantage of the technical, marketing and manufacturing capabilities of DuPont as well as the well-established client base of Dupont to improve sales and further enhance its position in the chlorosilane business. Besides, this acquisition would also enable the company to vertically integrate its operations, thus cutting down on costs associated with raw material procurement and logistics.

Global trichlorosilane market report includes in-depth coverage of the industry with estimates & forecast in terms of volume in Kilo Tons and revenue in USD Million from 2017 to 2028 for the following segments:

The global trichlorosilane industry size was valued at over USD 4.84 billion in 2021 and is poised to record a CAGR of around 10.8% through 2028 on account of the surging consumer awareness about harnessing alternate sources of energy.
The hydrochlorination (HC) production process segment in the trichlorosilane market crossed USD 3 billion in 2021 and is expected to strike a CAGR of over 11.2% between 2022 and 2028 owing to the rising development of efficient and cost-effective production processes.
The trichlorosilane industry size from the silane coupling agent application segment is set to record USD 6.28 billion by 2028, on account of the greater need for heat & water resistance, weatherability and improved durability of resins.
North America trichlorosilane market share is slated to exceed USD 2.31 billion by 2028, driven by the surging efforts undertaken by solar manufacturers to increase the efficiency of solar photovoltaic cells in the region.
Customize this Report
Inquiry Before Buying