Transformer Oil Market size was valued over USD 2 billion in 2017 and is set to witness an annual consumption of over 2,000 Million Litres by 2024. 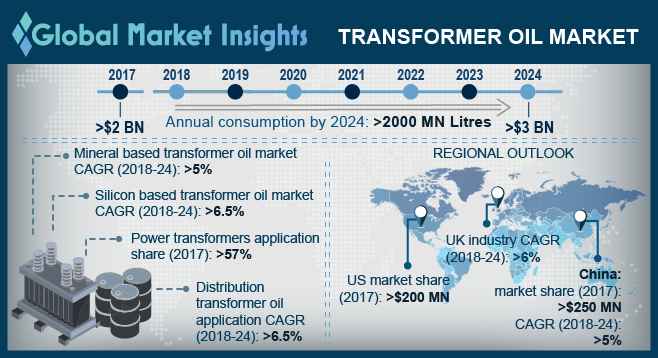 Increasing demand for modernization of aging grid infrastructure coupled with large scale capacity addition will boost the market. For instance, in 2016, the U.S. DOE announced an investment of USD 220 million under the Grid Modernization Initiative. The funding was done to revitalize the power grid thereby making it resilient, affordable and sustainable. Rapid urbanization along with increasing expenditure across infrastructure sector in developed economies will further stimulate the business scenario.

Stringent legislative measures for the development of reliable grid network along with rising electricity demand will augment the market. Favorable regulatory reforms supporting the expansion of sustainable energy networks coupled with government aided policies consisting of feed-in-tariffs will further drive the industry landscape. The European Union proposes the Infrastructure Package for the allocation of USD 10.6 billion from the EU budget for the funding of energy network infrastructure from 2013 to 2020.

Increasing demand for electricity across the globe has propelled the deployment of new transformers which in turn will boost the market. Rising focus toward rural electrification along with massive funding from nonprofit organizations will further fuel the industry growth. The World Bank under the Sustainable Energy for All initiative has committed to achieve universal access to electricity by 2030 with an investment of USD 37 billion per year for the extension of traditional electricity grid.

Mineral based transformer oil market is anticipated to expand over 5% by 2024. High compatibility to operate in high voltage transformers and ease of availability has accelerated the adoption of these products across the industry landscape. High temperature viscosity and good oxidation stability are some other imperatives contributing to the increased product demand growth. However, growing prominence of bio-based counterparts are expected to offer competitive edge to the mineral based oils.

Naphthenic mineral based transformer oil market is set to grow on account of low temperature performance and greater solvating power as compared to paraffinic oils. Increasing adoption of naphthenic based oil across developed nations with regard to their easy availability and large reserve base will further boost the product landscape.

Bio based transformer oil market is expected to witness strong growth on account of increasing awareness regarding biodegradability and environmental sustainability. Stringent government regulations pertaining to environmental conservation and emission reduction along with massive investments in the renewable energy sector will further drive the industry growth.

Power transformers in 2017 held over 57% of the global market share. Increasing investment in the power sector coupled with expansion of power grids across developing nations will propel the product penetration. Increased usage of power transformers at the receiving and finishing end of high voltage transmission lines will further fuel the industry landscape.

China market is anticipated to expand over 5% by 2024. Rising need for upgradation and transformation of existing electricity infrastructure along with favorable regulatory reforms supporting the expansion of sustainable energy networks will drive the industry landscape. Rapid expansion of cross border transmission networks coupled with government initiatives for the modernization of electricity grid will further propel the business landscape. For instance, in March 2017, the Government of China signed a MoU with the Nepal Energy Ministry for the joint development of cross border transmission lines between two countries.

The U.S. market in 2017, was valued over USD 200 million.  Increasing demand for refurbishment of existing grid infrastructure coupled with considerable investment for the integration of effective grid systems will enhance the industry outlook. Deployment of reliable grid support mechanism along with rapid technological advancements will further fuel the industry growth.

Upgradation of existing power supply infrastructure coupled with increasing per capita electricity consumption will boost the Europe market. As per the Agora Energiewende, a joint initiative of the European Climate Foundation and the Mercator Foundation, the electricity consumption in Europe rose consecutively for the third year with an increase by 0.7% in 2017. Technological upgradation of aging transformers along with increasing awareness toward environmental conservation will boost the adoption of bio-based transformer oils.

Notable industry players across the global market include Nynas, Cargill, Calumet, APAR Industries, Hydrodec, Valvoline, Clearco, DOW Chemical, Electrical Oil Services and Engen amongst others. Cost competitiveness, product accreditations along with an extensive distribution network are the significant strategic assets to gain a competitive position across the industry.