Space Robotics Market size surpassed USD 2 billion in 2020 and is anticipated to grow at over 6% CAGR between 2021 and 2027. Increasing government projects and investments related to space research & exploration in several countries are driving the industry growth.

The benefits including better productivity, cost-effectiveness, and the ability to perform in risky situations efficiently as compared to human substitutes is likely to augment the market demand. The launch of several satellites and spaceships working in deep & spaces requires timely maintenance & repairing, creating the need for highly efficient space robotic systems. 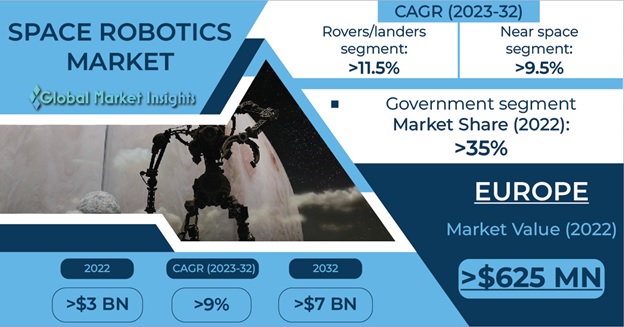 The growing chip manufacturing industry will accelerate technological advancements in the space robotics. Companies are focusing on research activities in the field of aerospace, on account of the rising demand. For instance, in August 2021, Samsung Group announced an investment of around USD 205 billion in its semiconductor, telecommunications and biopharmaceuticals units in a timeframe of three years. The company is focused on developing an advanced process technology with the help of AI and data centers for its semiconductors, utilized for several applications.

The major factor challenging the growth of the space robotics market is the lack of control over outer space calamities. In outer space, several calamities, such as asteroids, gamma ray bursts, solar flare, space debris, and supernova, can occur & damage the machinery. This factor can impact the operational activities of the entire infrastructure and can potentially disrupt the process.

The market was negatively impacted in 2020 due to stringent lockdowns imposed by government organizations, resulting in the stagnancy in industrial activities. The temporary shutdown of manufacturing plants, industrial facilities, and R&D centers hampered the industry supply chains. The supply-chain disturbances caused delays in new solution launches and the development of rovers, satellites, and interplanetary missions. With the gradual streamlining of the global supply chains, the companies will focus on resuming R&D operations.

Rising adoption of rovers/landers and robotics arms for space exploration

The product segment held nearly 50% of the space robotics market share in 2020. Increasing initiatives by market leaders to study the surfaces of nearby planets & their satellites are fueling industry size for rovers & landers. For instance, in May 2021, General Motors and Lockheed Martin teamed up to develop lunar rovers for NASA. These rovers will be equipped with features, such as hazardous terrain capabilities and autonomous driving, creating market opportunities.

Exploration of asteroids near to earth surface

The near space application is forecast to register growth rate of above 6% through 2027. The rising demand for communication satellites for robust wireless network connectivity on earth is propelling the near space exploration activities. Furthermore, the high emphasis of researchers on studying the asteroids nearer to the earth atmosphere will spur the space robotics industry.

Shifting focus of various governments toward improving their space programs 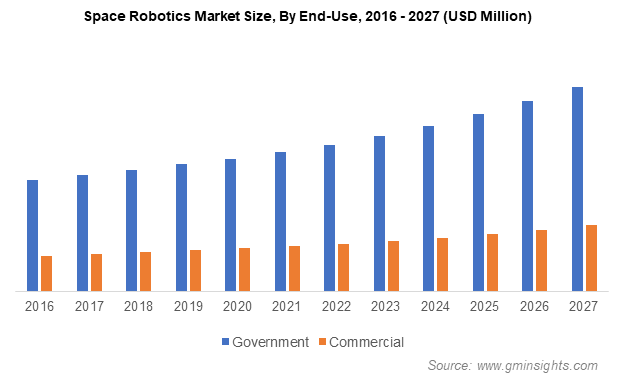 The government end use captured about 70% of the revenue share in 2020. Growing government investments in space exploration activities are contributing significantly to the industry statistics.

Countries including the UK, the U.S., China, India, and Japan are focusing on developing advanced space robotics systems to strengthen the performance of their probes & satellites. For instance, in July 2021, ISRO announced to launch the Chandrayaan-3 lunar mission by the third quarter of 2022 to study the surface of lunar. This mission will play a vital role in exploring the dark side of the Moon, which is expected to possess vast resources of water and minerals. 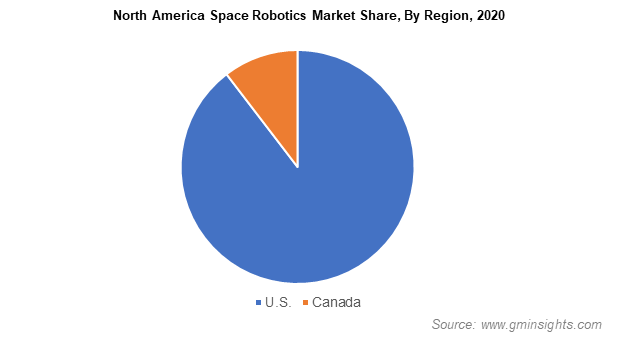 The North America space robotics market size accounted for around USD 1 billion in 2020. Space agencies in the region are focusing on driving innovations to support different space missions. For instance, the National Aeronautics and Space Administration (NASA) is conducting its space robotics challenges since 2017 to advance robotics autonomous and software capabilities. In September 2021, the organization was awarded prize packages of up to USD 535,000 to seven different teams for developing codes to coordinate with robots.

This market research report on space robotics includes in-depth coverage of the industry with estimates & forecast in terms of revenue in USD from 2016 to 2027 for the following segments:

The market size of space robotics exceeded USD 2 billion in 2020 and will witness a CAGR of more than 6% from 2021 to 2027, says this GMI report.
The near space application is expected to register growth rate of about 6% up to 2027 due to the need for communication satellites for seamless wireless network connectivity.
Governments contributed above 70% of the industry share in 2020 and will observe a robust outlook with the research and exploration activities.
North America market size valued at about USD 1 billion in 2020 and will grow owing to investments in innovations.
MAXAR Technologies, Inc., Stinger Ghaffarian Technologies, Honeybee Robotics Ltd, Northrop Grumman, Altius Space Machines, Inc., GITAI Inc. and Motiv Space Systems, among others, are a few of the leading companies boosting the market.
Customize this Report
Inquiry Before Buying