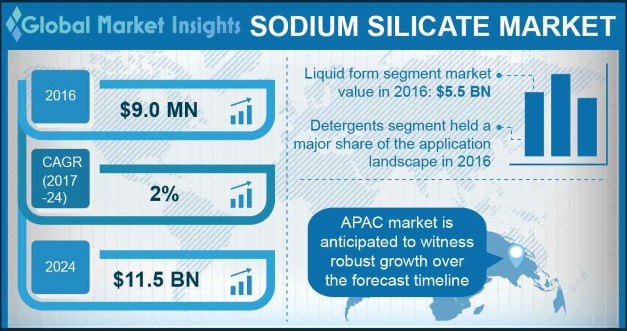 Global sodium silicate market is anticipated to grow in future at a significant growth rate as a result of growing consumer awareness regarding basic sanitation and hygiene amenities. The product has a high demand worldwide attributed to its extensive use in the various end user industries. Pertaining to a low cost and easy use, it is used an adhesive, detergent, cement binder, cleaning compound, anticorrosive agent and a coagulating agent in several sector which is uplifting global market size. It is also utilized as a catalyst generating a profitable growth for market.

The product demand is expanding in water purification applications as a result of its corrosion resistant nature coupled with increasing atmosphere and nature concerns. American Water Works Association has also supported sodium silicate to be used in controlling erosion of municipal water. Furthermore, BASF SE, which in one of the major players in the global market has started huge investments in modernization of its silicon plan at Düsseldorf-Holshausen. The funding was for improving its existing manufacturing facilities for the next ten years. Furthermore, massive government spending on municipal water treatment facilities in developing countries such as India, Brazil, Indonesia, etc will positively impact on the sodium silicate market demand over the forecast timeframe.

Market growth can be restrained due to harmful effect of the product on human health. Excessive human contact of chemical compound can cause harm to human health. Inhalation of sodium silicate can result in irritation in mucous membranes and in the respiratory tract. High concentration of the compound can also cause permanent damage to lungs. Thus, product use in limited concentration due to prevalence of stringent government legislations may hamper demand.

Sodium silicate is generally utilized as liquid form in majority of applications. Liquid form of this compound generated revenue over USD 5.5 billion in 2016. Liquid form has some unique properties like solubility, which makes it different from powder. Such properties together with a low-cost result in increasing use of the product in various industrial applications. Liquid form is used in binding fiber drums, paperboard laminates, cores of toilet tissues & paper towel etc. Manufactures prefer the compound due to its nontoxic nature, low cost and being environment friendly characteristics.

Detergent hold the major sodium silicate market share in application segment of the product. The product has a high demand in detergent manufacturing application owing to excellent emulsification, deflocculating and wetting properties. Usage of the chemical compound in detergent helps in reducing surface tension which in turn improves soil and dirt removal mechanism. There are several detergent operations which are performed by using granular and liquid form of sodium silicates. Some of these operations include textile processing, metal cleaning, washing dishes, laundering etc. In textile industry, the product is used with soaps, bleaches, wetting agents and in various alkalis to perform tasks such as kier boiling cleaning and finishing, degumming etc. Sodium silicates are also added in detergent pastes to control the viscosity in the manufacturing of detergent powder of desired density. 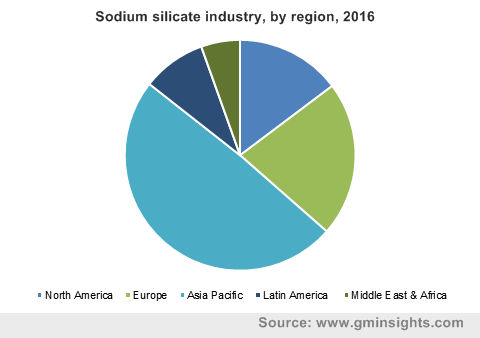 Asia pacific has the highest growth in the projected time frame owing to increasing infrastructural development in emerging economies. Improving socio-economic factors in Asia Pacific is a major factor propelling product demand for its usage in detergents, food and healthcare applications. Another region having a high growth rate is North America led by the U.S. The country dominates the sodium silicate market as a result of presence of several pulp & paper industries, detergent manufacturing companies. Also, geographical advantage of the U.S. in terms of raw material availability is an added advantage to the industry. It is largely used in wastewater treatment applications in the region as it is approved by EPA and FDA to be utilized in drinking water as an additive for human consumption.

Many market players are expected to increase their product portfolio and engage in producing silica derivatives such as silica gel, precipitated silica, zeolites and silica gel. The companies are also engaged in developing innovative strategies including joint ventures, mergers and acquisitions and product capacity expansions. For instance, Evonik industries purchase stakes in Harris & Ford Silico LLC, which is engaged in production of silica. The step is addition to company’s inorganic material business. with this Evonik will have the ability to provide high quality silica to customers. Key players in the market are BASF, Nippon Chemical, Evonik Industries, PQ Corporation, W.R Grace & Co., OxyChem Corporation and Tokuyama Siltech Co. Ltd

Sodium Silicate has been gaining importance in various application which is increasing its market size. the chemical compound has also been employed as a catalyst in synthesizing biodiesel which itself has a very growth rate in the market. The ease in procuring this chemical compound has modified its position as catalyst in transesterification process. Furthermore, massive spending on water treatment facilities on account of rapid urbanization and industrialization in Asia Pacific and Latin American countries will complement business growth.