Soap Noodles Market size valued at USD 920 million in 2018 and will witness around 3% CAGR from 2019 to 2025. Growing liquid soap and gels penetration across the globe is anticipated to be a major downside to the business growth.

Soap noodles are either tallow (animal fat) or vegetable oil derivatives such as palm oil, olive oil, coconut oil, and palm kernel oil, that are extensively used as a raw material bar soap production. These soap noodles are found in various combinations in the market and are widely employed for manufacturing of all kinds of bar soaps. The typical blend of 80:20 palm oil and palm kernel oil soap noodles are considered to be optimal grade for the manufacturing of high-quality personal hygiene soap bars. 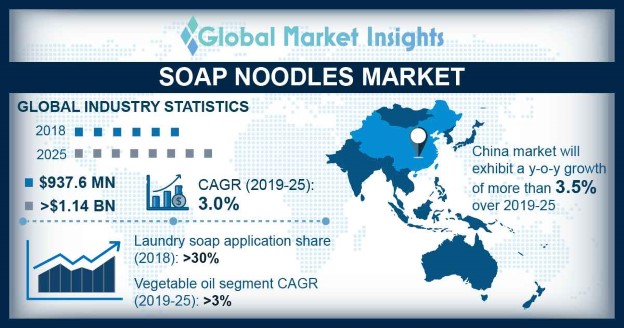 Vegetable oil segment was the largest segment in 2018 and is anticipated to continue leading throughout the given period due to its ability to provide lather. Asia Pacific is highly dependent on vegetable oil for soap noodle production whereas, North American and Latin American region uses tallow for the manufacturing of soap noodles.

According to Malaysia Palm Oil Board (MPOB), Malaysia’s palm oil plantation area reached 5.85 million hectares in 2018 which showed an increase of 0.7% since the previous year. Moreover, the MPOB also states that Malaysian export of oil palm products in 2018 accounted for over 24 million tons that showed a 3.8% rise from the previous year. Thus, dynamics shall subsequently boost the soap noodles market share as Malaysia is one of the major suppliers of soap noodle feedstock.

Soap noodles are used in soap bar production. Therefore, growing demand for liquid soaps can negatively affect the soap noodles market demand during the assessment period. Moreover, with the increasing shift in preference towards liquid gels the major manufacturers are seen to reduce the R&D expenditure for the innovation of soap bars and concentrating more on liquid soaps and gels. This restraint can only be seen in the developed countries in the recent times.

However, comparatively high cost associated with liquid soaps and gels, makes bar soaps a cost-efficient option amongst major consumer base of middle-class population in Asia Pacific and other developing regions.

The global soap noodles market by source has been segmented into vegetable oil and tallow. Vegetable oil segment, comprised majorly by palm oil and palm kernel, held the largest share in 2018. Developing countries in Asia Pacific region are highly dependent on palm oil for soap noodle production. The presence of the significant palm oil manufacturing countries in the region namely Indonesia and Malaysia have made easier feedstock availability, which is the major factor attributing the industry growth.

Additionally, countries such as China and Japan also use animal fat for soap noodles production in the region. Tallow is a common source to produce soap mainly in North and Latin American countries. The abundant availability of tallow at a low cost in these regions is fueling the soap noodles market segment growth. 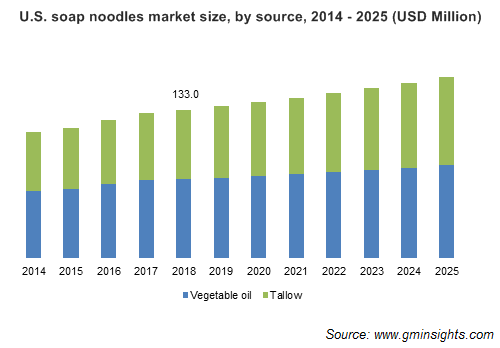 Saponification production process accounted for more than 50% share in soap noodles market in 2018. Saponification process involves the conversion of oil or fat into soap noodles in the presence of an aqueous alkali. This process is highly preferred over fatty acid route owing to its operational ease and inexpensive nature. Soap noodles produced from this process are associated with good perfume retention and excellent combination of oils. Asia Pacific is one of the major regions that adopted the oil saponification route in 2018 and is anticipated to show the same trend throughout the given period.

Personal hygiene soap was the largest and fastest growing application segment in 2018 and is projected follow the same trend throughout the assessment period. High quality toilet soaps are often manufactured using soap noodles with a total fatty matter (TFM) of over 75%. The growing awareness of personal hygiene in the developing regions coupled with the increasing government expenditure for the developing retail sector are some of the major factors propelling the soap noodles market sales across the globe.

China and India are projected to be the major countries attributing to the growth of the overall market size throughout the review period. Personal hygiene segment is anticipated to grow at a CAGR of over 3% throughout the forecast period.

Asia Pacific region was the major revenue pocket in 2018 and is set to exhibit the same trend throughout the review period. The growing population in the region has seen as surge in the demand for personal hygiene and laundry soap bars thereby positively contributing to the soap noodles market growth. Furthermore, easy availability of vegetable oil in the region coupled with the increasing palm production is projected to further add to the market growth.

Malaysia and Indonesia are the major raw material manufacturer in the region, whereas China and India are largest revenue generating economies in the region. The soap noodles market in China held a share of over 28% in 2018 and is projected to grow at a CAGR of over 3.5% during the assessment period. Additionally, the growing investment in the retail sector development has made the availability of consumer goods easier in the recent years which shall further boost the soap noodles market revenue during the forecast period.

According to the India Brand Equity Foundation, India is the world’s fifth largest destination in the retail space and the retail market in India is projected to grow from an estimated over USD 795 billion in 2017 to USD 1,250 billion by the end of 2025.

These major players operating in the soap noodles industry are adopting various organic and inorganic growth strategies to increase their foothold in the market. For instance, IOI corporation Berhad acquired  the oleochemical business of CREMER OLEO GmbH & Co. KG based in Germany. This acquisition was in line with their strategy to further enhance their production capacity and their position in European market.

Soap noodles is highly forward integrated market. The large-scale manufacturers exist in the entire value chain from raw material manufacturing to finished products. Some of the manufacturers produce soap noodles for captive consumption as well as for sale in the market. The market is subjected to various ups and downs owing to the changing palm oil production scenarios which consequently define the raw material prices. With major countries depending on vegetable oil sources, the changing palm oil price has major impact in the global market.

Soap noodles market report includes in-depth coverage of the industry, with estimates & forecast in terms of revenue in Kilo Tons and USD million from 2014 to 2025, for the following segments:

The global soap noodles market size is anticipated to depict 3% CAGR through 2025, having been valued at a revenue of USD 920 million in 2018.
Vegetable oil segment, including palm oil and palm kernel, accounted for the largest soap noodle market share in 2018. The growth can be credited to the increased dependency of the emerging nations of APAC, on palm oil, to manufacture soap noodles.
Saponification production process held over 50% of soap noodles industry share in 2019 and will depict appreciable gains owing to the fact that the process is inexpensive and convenient.
Personal hygiene was the fastest growing application segment in the year 2018. Personal hygiene segment may exhibit 3% CAGR through 2025, driven by the ongoing pandemic and rising awareness about hygiene.
China held 28% of the regional market share and may depict 3.5% through 2025, propelled by the rising investments in retail and easy availability of consumer goods.
Customize this Report
Inquiry Before Buying