Small Hydropower Market size on installation base was over 110 GW in 2015.The industry expects gains at over 2.5% CAGR up to 2024.

Small hydropower refers to the establishment of hydroelectric power facilities on small scales, to cater to communities and industries at local levels, as well as to facilitate distributed generation in regional power grids. They include plants with generating capacity up to 25 MW (megawatts). Burgeoning adoption of renewable energy sources will propel small hydropower market share. 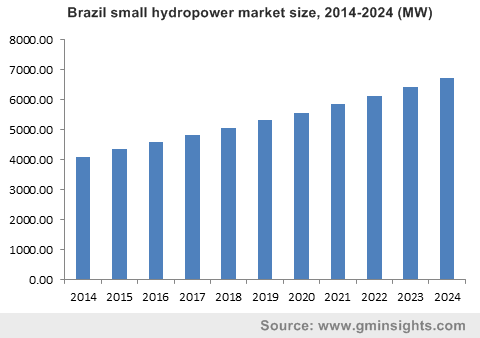 Global domestic electricity consumption increased by 1.2% from 2013 and estimated at more than 20,300 Twh in 2014. Asia electricity consumption was dominant and comprised over 40% in 2014. North America, noted as the second largest consumer with consumption at over 4,365 Twh in the same year. Rapid industrialization and increasing population are expected driving factors to leverage small hydropower (SHP) market size growth.

Monetary concessions and credits are given to industries for producing and consuming sustainable resources including wind, solar, and hydro. Hydropower accounted for 16.60% of the global renewable electricity consumption in 2014. Approximately 37 GW capacities were added in 2014, increasing total capacity by 3.6% approximately.

Small hydropower plant is specifically designed to serve remote areas. These plants can be grid connected and off grid; off grid is mainly suitable for where grid connectivity is not available.

Energy policies are implemented by governments pertaining to total electricity generation capital cost, maintaining safety, communities resettling and manpower availability to build and operate the plants. SHPPs are being designed to reduce high capital costs and to minimize environmental impact on the local community.

SHPP is often built using existing dams as these plants does not require huge infrastructure and facility, which is highly relevant for countries with less capital. These plants are also constructed within the river flow, termed as run of river; ideal for areas with no electric infrastructure. Transformers, generators, turbines, and reservoirs are the essentials to build SHPPs.

Abandoned hydro sites utilization is another lucrative factor to positively influence small hydropower market growth. Many old sites that need refurbishment but constraint by budgets can be operated as SHPPs.

Tajikistan is eighth richest nation in terms of hydropower resources globally. However, due to lack of capital and investment, this resource is underutilized with electricity supplies and still failing to meet country energy needs. Tajikistan government is now working to solve power problems by building mini plants. The project is focused to meet overall energy requirement by building approximately 170 mini plants in remote & rural areas.

The technical difficulties to upgrade existing power transmission lines in rural areas may hinder the small hydropower market growth. These lines were initially designed for centralized electricity generation model; not with the intentions to compatible with large volumes generated locally.

North America, with dominant Canada and U.S. small hydropower market size, is set to grow at more than 2.5% CAGR up to 2024. Policies by FERC in order to promote renewable energy coupled with need to provide energy in rural areas are promising factors to foster industry growth.

Central & South America is set to grow at over 4.5% CAGR up to 2024. Huge hydro potential sites and untapped areas should propel regional demand.

It is a method to generate electricity that uses moving water to produce electricity. SHP is primarily used in isolated regions. These plants are installed in streams, small river or in the existing water supply network. SHPP can be installed with negligible environmental impact on ecosystems. Due to its low investment costs, versatility, and renewable nature, it is a suitable option to generate sustainable as well as inexpensive energy in developing and rural areas.

However, categorization differs from country to country as there is no standard consensus among regions. In European Union, Portugal, Belgium, Ireland, Spain, and Greece accept 10 MW as upper limit for SHP installed capacity, while in other countries 3 to 1.5 MW is the maximum capacity.

Hydropower generation relies on water flow and head to generate energy, SHPP can be installed in any system where these factors are available. It includes streams, rivers, water network where pipes supply water flow to head. Small hydropower fit into run of river systems and in existing water infrastructure.

Majority of small hydropower plants are run of river schemes. Electricity is produced when sufficient water is present in stream or river. When electricity is produced, the power house transfers the electricity to a transformer which transmits to the grid substation or to the destined village. Once electricity is generated, water flow returns back to the river. Due to this factor, small hydropower plants are recognized as a non-polluting and renewable energy source. When the flow reduces and reached below design flow value, the production stops.

Infrastructure is already built, which reduces the investment cost by around 50%. No land acquisition is required. The plant setup will have minimal environmental impacts, and guaranteed discharge throughout the year is available. The produced electricity is also used in water supply system, with surplus power traded to the government.