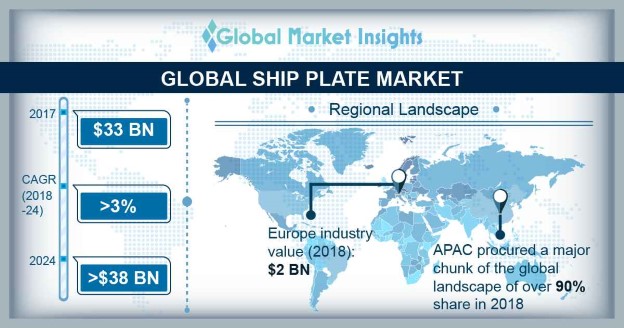 Escalating shipbuilding activities in Asia Pacific region after the slump in 2015 – 16 would be the chief growth driver for the ship plate market. Major shipbuilding countries such as China, South Korea and Japan are likely to increase the product demand in coming years. These three countries account for more than 90% of the global shipbuilding industry. In the first quarter of 2019, China secured more than 40% of the global shipbuilding orders, followed by South Korea and Japan. Presence of the large shipbuilding companies such as China Shipbuilding Industry Corporation, Hyundai, and Mitsubishi along with the abundant deposit of iron ore in the region will drive the regional shipbuilding sector over the coming years. In addition to this, emerging markets such as Philippines, India and Taiwan are also witnessing significant growth in the shipbuilding activities which will prosper the demand for ship plates during the forecast period. Moreover, increasing investment by government as well as major ship manufacturers across the globe in order to expand capacity of shipyards will drive the product demand in future.

A major factor that will drive the growth of global ship plate market is the availability of raw materials. Steel, used as a raw material for ship plate manufacturing, is witnessing continuously increasing demand in both developed and developing countries owing to its extensive application in major end-use industries such as shipbuilding, automotive, construction, etc. China leads the global steel production with five of its steel producing companies ranking among the top ten global steel manufacturers in the world. Apart from that, India has witnessed a significant rise in the steel production that has helped the country to replace Japan as the second largest steel producing country in the world. Increasing demand in the end-use industries coupled with favorable government norms will drive the steel production, which in turn, will propel the market growth.

Fluctuation in steel prices may pose hindrances to the global ship plate market. The market witnessed a major hit in 2015 and 2016 due to a sudden fall in steel prices in addition to low demand from shipbuilders. Such price volatility makes it difficult for the manufacturers to maintain steady profit margins, and has a negative influence on the market growth.

Stainless steel ship plates will have a decent amount of ship plate market share throughout the forecast period. These ship plates are prepared from high strength steel grades and has additional alloying with chromium in order to increase its resistance to corrosion. The superior mechanical properties and corrosion resistance make this steel grade suitable for oil tankers, chemical carriers and container ships.

Based on application, the global market is segmented into tanker, bulker, container, and others. Tanker was the largest application segment in the ship plate market in 2018 with a share of around 40% of the global market. After a sudden decrease in the orders in 2016, the tanker segment witnessed the highest growth in new order bookings as compared to other ship types. Tankers are made from stainless steel in order to provide superior resistance from chemical corrosion. Increasing global demand for oil & gas products and bulk as well as specialty chemicals, coupled with the rising international trade activities have increased the demand for tankers across the globe.

Container application segment will have a significant market share throughout the forecast period. In 2017, the new orders generated for containers were more than 2.5 times the order generated in 2016. Rapidly increasing cargo transportation will drive the growth of this application segment in coming years.

Asia Pacific region has a dominant position in the global ship plate market and accounted for over 90% market share in 2018. Availability of production infrastructure along with rising product demand from regions like Philippines, Taiwan and India have resulted in the dominant position of the region in the global market. Extensive product application in shipbuilding industry, which has been flourishing in the emerging countries in the past years will prosper the growth of regional market. Increasing government expenditure in shipbuilding industry coupled with availability of raw materials and low labor costs are some of the factors for the high growth in the region.

Europe ship plate market was estimated at around USD 2 billion in 2018. It can be attributed to the rapidly increasing new shipbuilding orders and higher forward cover as compared to other regions. The region is likely to witness highest growth rate throughout the forecast period.

In the latter stage of 19th century, steel was used in the shipbuilding industry for the very first time to complement the use of iron. In the later years, the use of steel in shipbuilding was maximized owing to its superior performance characteristics. Steel ship plates are extensively used in the shipbuilding industry owing to its excellent mechanical properties and weldability. These plates improve the construction efficiency, reduce life cycle cost and are also used to manufacture lighter ships. Increasing shipbuilding activity in the Asia Pacific region along with availability of raw materials and increasing demand of the product in Europe will drive the growth of global ship plate market.

The market size of ship plate was crossed USD 33 billion in 2018.
The industry share of ship plate is expected to grow at 3% CAGR up to 2025.
Increasing shipbuilding activities across the Asia Pacific and easy availability of raw materials like steel are expected to fuel ship plate production activities in coming years.
Carbon steel based ship plates hold a majority of the volume share as they are commonly used in cruise ships and bulk carriers and are considerably more affordable than their counterparts.
The Asia Pacific already holds a dominant position when it comes to revenue growth. Availability of a robust production infrastructure coupled with increasing demand from Taiwan, India and Philippines would further help the region hold onto this position.
Fluctuations is raw material prices might impede demand for ship plates. Volatile raw material prices make it difficult for industry players to maintain their profit margins, influencing revenue growth negatively.
Customize this Report
Inquiry Before Buying