Shape Memory Alloys Market size was estimated over USD 9 billion in 2018 and the industry will grow by a CAGR of more than 12% up to 2025. Rapid growth in the global biomedical, aerospace & defense and automotive industries will be the major growth drivers for the market.

Emerging aerospace markets like France, Germany, UK, Japan, China, Russia, and India are likely to boost product demand in the aerospace industry in coming years. Additionally, increasing investment by the governments of developed as well as developing nations across the world in defense sector is likely to drive the demand of shape memory alloys market in the future. 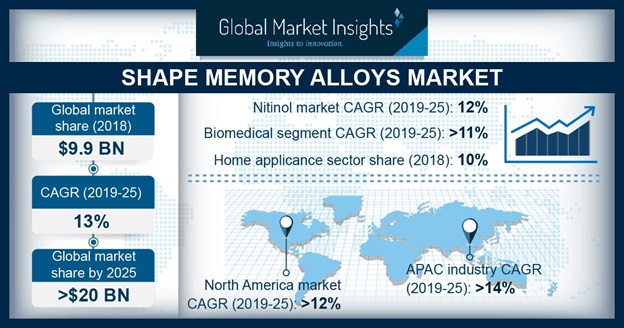 The U.S. is a major SMAs industry owing to its established aerospace and medical industries. The country invested more than USD 600 billion in its aerospace & defense industry in 2016 with its export value crossing over USD 100 billion in the same year. The U.S. is the world’s largest aircraft producer. Apart from that, the country is the second largest automobile manufacturer and is also known for its advanced biomedical industry.

The rising demand for better healthcare services, flourishing global biomedical and automotive industries will propel the demand of SMAs in the near future. However, fluctuating raw material prices may hinder the growth prospects of the shape memory alloys market share during the forecast period.

Based on product, global shape memory alloys market is segmented into NiTi (Nitinol), copper-based alloys and others. Nitinol occupies the largest market share and will grow by a CAGR of around 12% in the forecast timeframe. Majority of the applications prefer Nitinol to its substitutes owing to its superior stability, excellent thermo-mechanical properties and practicability as compared to other alloys.

Other SMAs category includes Fe-Mn-Si, Ni-Fe-Ga, etc. Fe-Mn-Si is used in pipe-joint for steel pipes, fishplate for crane-rail, etc. Technological advancements in the future which will enable the usage of these product type for new applications is likely to drive other shape memory alloys market demand in coming years.

Based on end-user, the market is segmented into biomedical, aerospace & defense, automotive, home appliances and others. Biomedical is the chief end-user segment and is likely to gain by more than 11% CAGR during the forecast period. Extensive application of the product for dental implants, stents, catheters, etc. will drive its growth. Additionally, surging biomedical industry in the developing countries will also propel the shape memory alloys market demand over the forecast period.

The global market is dominated by North America, which accounted for approximately one-third of the market share in 2018. High production capacity, large number of product manufacturers coupled with the presence of an established biomedical and automotive industry has resulted in the region’s dominant position in the SMA market. The North America shape memory alloys market is likely to grow at a CAGR of over 12% in coming years.

Asia Pacific region is the fastest growing shape memory alloys market and is likely to exhibit a CAGR of more than 14% during the forecast timeframe. Rising population, economic progress and improving government expenditure on infrastructure development are some of the factors for the high growth in the region.

Companies in the shape memory alloys industry use strategies such as mergers and acquisitions along with significant investments in research and development to increase their competitiveness. Long-term supply agreements between manufacturers and end-users are also common in the industry. Allegheny Technologies’ agreement with Pratt & Whitney for the supply of nickel-based alloys for manufacturing next generation jet engines is an example of this trend.

Shape memory alloys market report includes in-depth coverage of the industry with estimates & forecast in terms of volume in tons & revenue in USD Million from 2014 to 2025, for the following segments:

With an annual valuation of around USD 9 billion in 2018, the industry is expected to register over 12% CAGR through 2025 owing to major automotive, biomedical and aerospace & defense applications globally.
Nitinol or NiTi is expected to be the highest consumed shape memory alloy, with demand witnessing a 12% up to 2025 due exceptional thermo-mechanical properties, high practicability and superior stability.
The market share is anticipated to record nearly 11% CAGR through 2025 from biomedical applications, as the alloys are used in the making of catheters, dental implants and stents, among other medical products.
Asia Pacific shape memory alloys industry size is expected to reach over 14% CAGR in the coming years owing to a considerable rise in disposable incomes, government spending on infrastructure and the rising population.
Customize this Report
Inquiry Before Buying