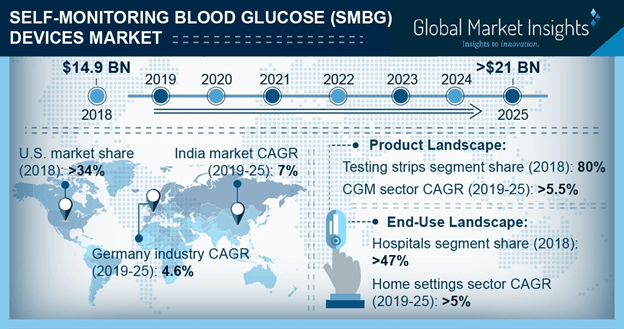 Rising pervasiveness of diabetes in developed as well as developing countries will be the key factor driving the global self-monitoring blood glucose devices (SMBG) market growth during the forecast period. As per the World Health Organization, the total diabetic population across the globe accounted for 422 million in the year 2014, with around 0.8% rise since 1980 among adults aged above 18 years. Among all the diabetic conditions, type 2 diabetes accounts for the most common form followed by type 1 diabetes and gestational diabetes occurring in around 14% of all pregnancies across the U.S. Moreover, the risk of diabetes increases with age, obesity, consumption of carbohydrate-rich food as well as with heredity. Thus, with escalating prevalence of associated risk factors, the incidence of diabetes will rapidly rise, thereby increasing the adoption of self-monitoring blood glucose devices in the forthcoming years.

Growing awareness regarding diabetes mellitus, its management and control of blood glucose levels (BGL) across developing nations will aid the SMBG market growth in the coming years. In India, presence of numerous mobile users along with high population base suffering from diabetes is estimated to boost device adoption for self-monitoring of blood glucose levels. Similarly, various government initiatives to increase awareness, investments in R&D for developing innovative technologies and subsidies for diabetes care products will spur the adoption of blood glucose meters in the coming years. For instance, the National Diabetes Services Scheme of Australia offers subsidized blood glucose testing products including strips, insulin pumps, needles & syringes and is striving to add more products under subsidy, thus augmenting the product demand.

However, stringent regulations pertaining to the development of advanced blood glucose monitoring devices may limit product approvals, thereby hindering the market growth. Furthermore, high cost of glucose monitors and associated treatment accessories, that is unaffordable for population in developing countries may hamper the self-monitoring blood glucose devices business growth over the analysis period.

Continuous glucose monitors (CGM) market is estimated to progress at rapid pace of more than 5.5% CAGR during the analysis timeframe. CGMs are generally used by patients that require frequent blood glucose monitoring. CGM systems help to predict future events of hypoglycaemia or hyperglycaemia for up to 60 minutes and provides information regarding clinically relevant glucose patterns. Aforementioned benefits of continuous glucose monitors in geriatric or critical care patients will spur segmental growth over the forthcoming years. 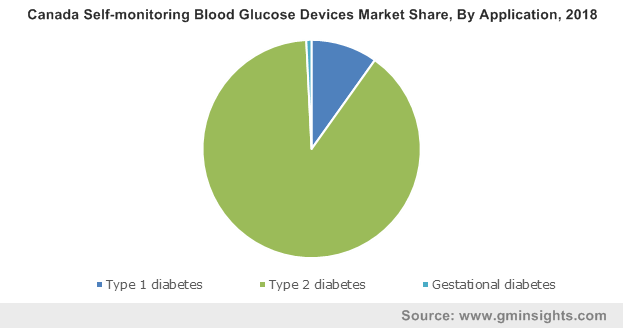 Type 2 diabetes market accounted for major revenue size of over USD 4.7 billion in the U.S. in 2018. High segmental share can be attributed to rapidly rising prevalence of type 2 diabetes mellitus (T2DM) owing to increasing incidence of obesity, unhealthy eating and lifestyle habits. T2D-affected population account for majority of the total diabetes cases. According to the National Diabetes Statistics Report, 2017 type 2 diabetes accounted for over 90% of all diabetes cases in 2017 in the U.S. Self-monitoring blood glucose forms the integral part of the treatment regimen for T2D. Hence, growing diabetes prevalence coupled with increasing geriatric population along with other risk factors will augment the segmental growth over the future years.

Gestational diabetes market is projected to witness 4.5% CAGR in the U.S. As per the American Diabetes Association, the prevalence of gestational diabetes in the U.S. is about 1-14% out of all pregnancies and may lead to further complications. Thus, self-monitoring of blood glucose is considered superior approach in the therapeutic strategies adopted during pregnancy. Thus, with increasing birth rate, the demand for self-monitoring blood glucose for early screening and control of blood glucose during pregnancy will escalate over the estimation period.

Hospitals segment held major market size of the global market with a revenue of USD 7.1 billion in 2018. Expanding requirement for efficient, precise and continuous BGL monitoring in ICUs to monitor the risk of hypoglycemia or hyperglycemia in patients will escalate the demand for advanced glucose monitors in hospitals. High glucose levels in critical care patients may lead to comorbidities and complications; thus, continuous monitoring of blood glucose in hospitalized patients is necessary. Additionally, expansion of healthcare settings across developing countries, rising number of hospitalizations and adoption of advanced devices for disease monitoring and control will impel the segmental growth in the upcoming years.

Home settings segment is estimated to progress at over 5% CAGR during the forecast period due to growing diabetic patient population. Advancement in diabetes care products to offer portable, efficient and easy-to-use devices at home will drive the segmental growth over the coming years. Growing preference of people towards portable and high-end technological products will augment the adoption of SMBG devices in home settings. Additionally, self-monitoring of blood glucose levels at home helps people in decision-making and analysing the effectiveness of current diabetes management. Such factors will boost the segmental growth during the analysis period. 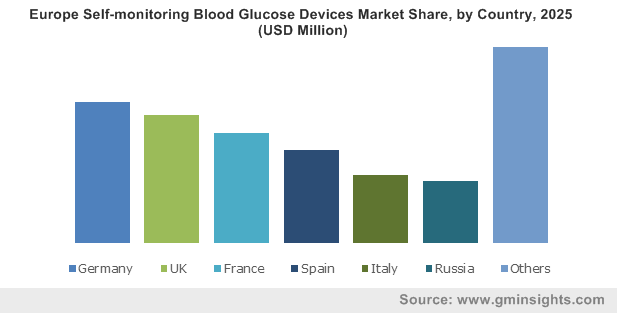 U.S. self-monitoring blood glucose devices market accounted for significant market share of over 34% in 2018 of the global market. Growing prevalence of diabetes in the country will be the key driver that will boost the overall market growth over the coming years. Greater prevalence of obesity due to physical inactivity, unhealthy food consumption and other lifestyle factors further escalates the diabetic population base. Moreover, rising preference for CGMs, increasing awareness among people regarding diabetes management along with greater demand for advanced diabetes care products will positively influence the U.S. self-monitoring blood glucose devices industry growth in the foreseeable future.

Indian market is forecast to progress at 7.0% CAGR over the analysis period. Increasing prevalence of diabetes coupled with rising geriatric population base susceptible to chronic diseases will prove to be high impacting factors for industry expansion. According to World Health Organization, in India, around 7.9% of the total female population and over 7.5% of the total male population had diabetes in 2016. Furthermore, growing adoption of homecare devices for self-management and control of diseases with cost-effectivity will drive India self-monitoring blood glucose devices business growth over the projection period.

Some of the notable players competing in the global self-monitoring blood glucose devices market are Abbott Laboratories, Dexcom, Roche, Johnson & Johnson and Medtronic among the other players. Key strategies undertaken by these firms include acquisitions, mergers, collaborations, and product advancements & launch to strengthen their product base and expand business worldwide.

Glucose monitoring can be dated back to the 1800s when urinalysis was the only test to check glucose levels, that was later commercialized using a copper reagent developed by Benedict in 1908. After few years, Ames developed the earliest blood glucose testing strip in 1965 called Dextrostix that used a big blood drop to analyse blood sugar and the resultant colour after washing the blood drop was compared with a reference chart. The test produced results within 60 seconds and was meant for physician use only. Later in 1970 the first glucose meter was introduced and was followed by several developments in the same. Several years of R&D in SMBG devices made it a standard test for type 1 diabetic patients as well as lead to advancements such lancets, use of minimal blood for testing and painless SMBG by the year 2010. Leading players such as Medtronic, Dexcomm and Abbott subsequently focused on innovating self-monitoring blood glucose devices leading to greater customer base.