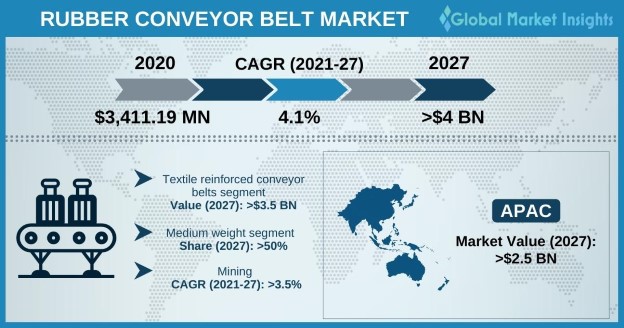 Rubber conveyor belt producers are developing methods to boost efficiency and enhance their overall performance. This move will encourage rubber conveyor belt manufacturers to directly supply to the construction, power generation, and other end-use segments, followed by investments in research activities to improve the performance of rubber conveyor belts. Increasing production & sales of cement, metals, and power will further drive the industry growth.

According to the World Bank data, global electricity demand is growing at 2.1% per year to 2040, double the initial energy demand. This increases the share of electricity for final electricity consumption from 19% in 2018 to 24% by 2040. Government policies, market conditions & jointly available technologies set the course for energy transitions to low carbon sources and their share rises from 36% today to 52% by 2040. The increasing electricity demand will lead to higher establishments of power generation plants across the globe, which will further surge the rubber conveyor belt market growth. 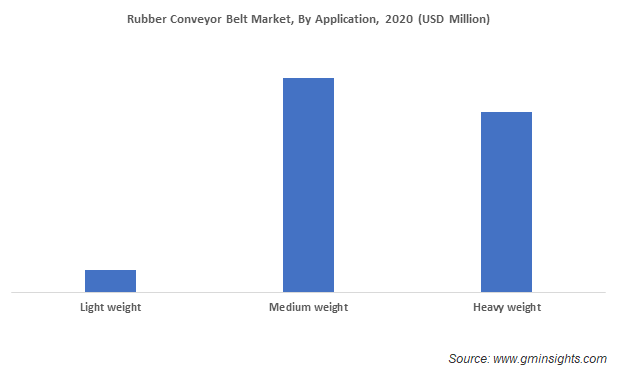 The medium weight segment is expected to garner more than 50% of the rubber conveyor belt market share by 2027. Increasing the consumption of rubber conveyor belts in small & medium enterprises in the past few years and rising demand from small-scale manufacturing units is likely to fuel the market demand.

In emerging countries including India, Indonesia, and Mexico, among others, the sales potential of the medium weight segment is enormous and it is anticipated to increase significantly as a large proportion of light & medium-weighted goods is manufactured in the region. As the adoption of medium-sized rubber conveyor belts enables feasible and smooth operations. In 2020, medium-sized rubber conveyor belts held nearly 45% of the volume share.

Mining segment is predicted to account for 20 million square meter demand by 2027. Mining has become a major consumer of conveyor belts with the need for continuous supply impelled by higher replacement rates. The rubber conveyor belt market revenue from mining is set to register growth rate of about 3.5% through 2027. Rising consumption of construction metals including iron and steel across the globe is enhancing the industry revenue. India & China have reported the highest growth rate in the rubber conveyor belt industry. 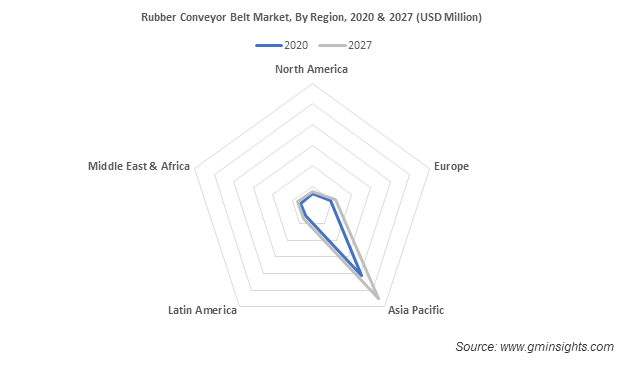 Asia Pacific rubber conveyor belt market is estimated to reach USD 2.5 billion by 2027. This can be primarily attributed to the large volume of manufacturing potential across industry verticals in the region. The mining sector in APAC shows significant growth potential, leading to an increase in the demand for transport rubber bands for mining purposes. However, growing investments by leading manufacturers will also develop the market to a higher level.

The ongoing COVID-19 pandemic has slowed down the industry owing to lockdowns across various Asian countries. Despite the forced lockdowns, the e-commerce market observed prominent growth as it needs rubber conveyor belts for the transportation of goods in warehouses, which is likely to positively influence the industry statistics.

The industry is fragmented due to the growing number of end-user industries deploying rubber conveyor belts to facilitate processing. High demand from end-users has resulted in the low threat of new entrants, leading to industry fragmentation.

Major companies are engaged in partnerships with mining & metal processors to gain a competitive edge over other companies. With the increasing demand for conveyor belts in various applications, many manufacturers are investing in research and technologies to gain a competitive advantage. Manufacturers compete through product innovations and expansions via acquisitions & mergers of startup players to expand globally. For instance, ContiTech AG developed a service solution monitoring system for conveyor belt systems that allow the early detection of weak areas in the conveyor belt system before damage occurs, leading to random descent and costly delays.

The market size of rubber conveyor belt crossed USD 3,411 million in 2020 and will record a CAGR of more than 4.1% up to 2027, says this GMI report.
Steel reinforced conveyor belt, textile reinforced conveyor belt, which is anticipated to register around USD 3.5 billion through 2027 owing to benefits like good abrasion and fire resistance, and solid woven belts are some common rubber conveyor belt materials.
Demand for rubber conveyor belts in mining is poised to reach around 20 million sq. m. up to 2027 impelled by the surging need for continuous supply and the higher replacement rates.
The Asia Pacific market is estimated to generate USD 2.5 billion up to 2027 owing to the expanding volume of manufacturing potential across industry verticals.
Customize this Report
Inquiry Before Buying