Rare Earth Metals Market was over USD 9.0 billion in 2016 and will grow at a CAGR over 9.7% by 2024. Neodymium segment generated the major share in terms of market revenue in 2016 and is estimated to dominate the global market over the forecast period. 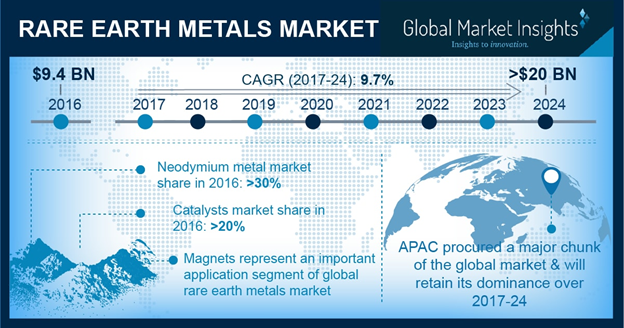 The demand for the clean energy will be further witnessed by volatility in the electricity market too. As the demand for electricity is escalating continuously, and as supply and demand must be kept in balance always. A larger share of renewable energy providers in the electricity mix may help in reducing that volatility, as there is little marginal cost to run a renewable energy plant. Thus, demand for rare earth magnets is predicted to grow as they are highly consumed in the production of wind turbines. The demand for renewable energy is increasing at a rapid scale, propelling the demand for wind turbines, which will in turn enhance the consumption of rare earth metals in generating wind energy. According to the EIA and GWEC, in 2015, the U.S. produced over 190 million MWh of wind energy and it was about 4.7 percent of total electricity generated in the U.S. Major manufacturers in the U.S. have set target to reduce greenhouse gas emissions, improve energy efficiency, and increase renewable energy consumption.

While hybrid automobiles and full electric vehicles are becoming increasingly more common in the US, China and Europe, the economy of much of the world is such that cars are financially out-of-reach for majority of the population. China has further advanced its position as the growth motor of the electric vehicle (EV) industry with record EV sales of close to 520 thousand vehicles in, with 78% increased sale from the previous year. Therefore, growing awareness and government initiatives to promote electricity generation via sustainable method along with increasing EV sales in developed countries will drive rare earth metals market over the forecast timespan.

Neodymium had a major share in terms of market revenue in 2016 and is likely to lead the global rare earth metals market over the forecast period. Increasing demand for neodymium-based magnets in automotive and power generation sector, will significantly push the demand for neodymium over the forecast timeframe. Cerium held an important share in global market in 2016. The oxide of this element is used as a catalyst in catalytic convertors in automotive exhaust systems for reducing emissions.

Rising demand for petrochemicals from various end-use industries is expected to be a prime factor driving the market growth. The segment accounted for more than 20% share in global rare earth metals market in 2016 in terms of volume. Major catalytic application is in fluid cracking catalysts (FCC) in oil & petroleum industry. The product is used in retaining catalyst effectiveness and are used for increasing the yield of gasoline fractions by cracking heavier oil fractions. Product used in FCC catalysis tend to be lighter ones, such as praseodymium and lanthanum.

Rare earth elements have a vital role in many manufacturing processes. They are used in specialty metal alloys and ductile iron, which are then used extensively in building & construction sector. The product is suitable for a variety of other applications such as water purification, R&D, nuclear and numerous finished goods. 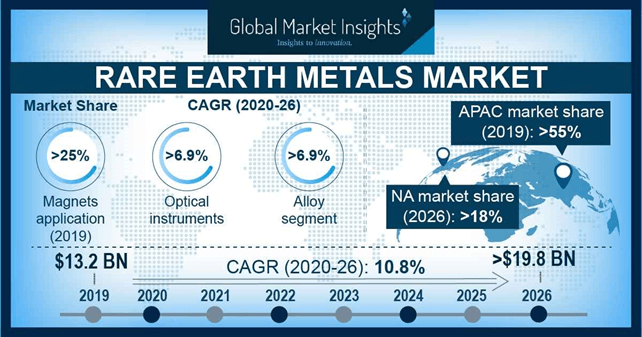 North America dominated with the highest revenue share in 2016 and is anticipated to rule the roost till 2024. Asia Pacific held a major in rare earth metals market share in 2016 and will lead the market throughout the forecast period, owing to the large RE element reserves and processing technology available in China. The country is a predominant supplier of rare earth metals, China’s recent industrial policies for rare earth coupled with its own rising demand for rare earths have led to widespread concerns regarding RE metal trade flow across the globe.

Rare earths are series of chemical elements present in abundance in earth’s crust, some are even more abundant than lead, gold, copper and platinum. Rare earth metals are not concentrated enough to make them easily exploitable. China was the major mining nation, with a share of almost more than 80% in 2016. Due to the increasing mining activities outside China, the prices for the raw materials are prone to decrease over the coming years. The product is indispensable in many optical, magnetic and electronic applications. For instance, motors using rare earth magnets are extensively used in aerospace & defense applications.

Rare earth metals market research report includes in-depth coverage of the industry, with estimates & forecast in terms of volume in Kilo Tons and revenue in USD million from 2013 to 2024, for the following segments:

Neodymium segment held the largest share in global market in 2016 and is anticipated to exhibit remarkable growth rate during the forecast period.
High demand for clean energy and growing demand from emerging technologies such as electric vehicles, and hybrid vehicles are major drive the growth of the global market.
North America region dominated with the highest revenue share in 2018 and is anticipated to rule the roost till 2024.
Ucore, Canada Rare Earth Corporation, China Rare Earth Holdings Limited, Ganzhou Qiandong Rare Earth Group Co., Ltd. and JL Mag Rare Earth Co., Ltd are the top contributors in the industry.