Rare Disease Treatment Market size exceeded USD 144.3 billion in 2019 and is poised to grow at over 12.2% CAGR between 2020 and 2026. Growing prevalence of rare diseases and its consequences on healthcare expenditure have augmented the demand for special treatments, positively impacting the rare disease treatment market growth. 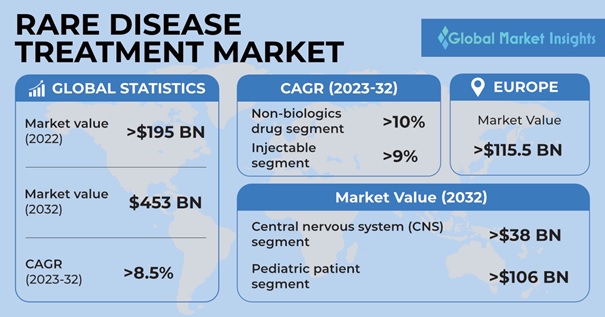 However, there are several factors hindering the efficient and effective clinical trials of drug development of rare disorders including low patient numbers, limited understanding of pathology and progression, and lack of established endpoints. Therefore, several regulatory bodies are engaged in implementing regulatory standards for drug approval for rare diseases to ensure patient safety and efficacy of drugs. The U.S. FDA is specifically focusing on development of gene therapy approaches for rare disease treatments. The National Institute of Health (NIH) and Food and Drug Administration (FDA) regulate the training and guidance to improve the quality and marketing of NIH-funded rare diseases orphan drugs. Additionally, NIH has also initiated several broader programs to support drug delivery for rare diseases.

The ongoing COVID-19 pandemic is an unprecedented public health concern and has posed several challenges to researchers, healthcare professionals and patients. The R&D institutions and biopharmaceutical industries are unable to focus on the development of novel therapies due to the threat of exposure to coronavirus. According to a COVID-19 Community Survey report by the National Organization for Rare Disorders (NORD), around 74% of patients suffering from rare disorders in the U.S. face challenges in accessing high-quality medications. Therefore, to eliminate such difficulties, FDA is working proactively with manufacturers towards providing advanced treatments to ensure the continuity of patient care by focusing on continuing clinical trials. Several biopharmaceutical companies are also focusing on drug development to meet the demand for treatment of rare disorders. Thus, during the pandemic the drugs used for rare disease treatments are being developed at a slow pace, restricting the rare disease treatment market expansion.

Growing incidence of rare disorders will fuel the market growth

According to the European Organization for Rare Diseases (EURORDIS) estimates, approximately, 6% to 8% of the population in European Union is affected by a rare disorder. Therefore, several research laboratories are focusing on R&D to meet the demand for specific therapeutics for treatment of rare disorders such as fatal familial insomnia and rare cardiovascular disorders, among others. Moreover, several rare disorders are fatal and around 50% to 60% of these disorders develop in childhood. Thus, with growing pediatric population suffering from rare disorders, the demand for specific therapeutic drugs is projected to substantially increase in the coming years. Furthermore, with rise in incidence of rare disease cases, several biopharmaceutical companies are investing in clinical trials of novel drugs pertaining to rare disease treatments. 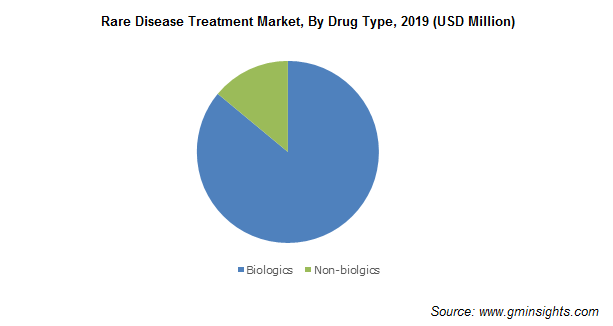 Biologics segment value in the rare disease treatment market was more than USD 124 billion in 2019 owing to the potential of biologics to effectively elicit an immune response in the recipient. According to a recently published article, the U.S. FDA has approved around 22 novel drugs and biologics for more than 800 rare disease indications. In addition, growing research activities in genomics has led to the development of effective biologics for rare genetic disorders. These factors have significantly increased the demand for biologic drugs. Moreover, several biologics such as recombinant, antibody, stem cells and gene therapy have proven to be effective in the treatment of rare cancer disorders.

Pediatric segment size in the rare disease treatment market crossed USD 29 billion in 2019 led by increasing number of drugs available for children suffering from rare diseases. According to a recently published report, around 80% of the rare diseases are genetic in origin and disproportionately impact children. Therefore, a total of 136 drugs are approved by the U.S. FDA for treatment of pediatric patients with rare disorders. These drugs have proven to be effective in treatment of rare disorders in pediatric population such as Byler disease and Krabbe disease. 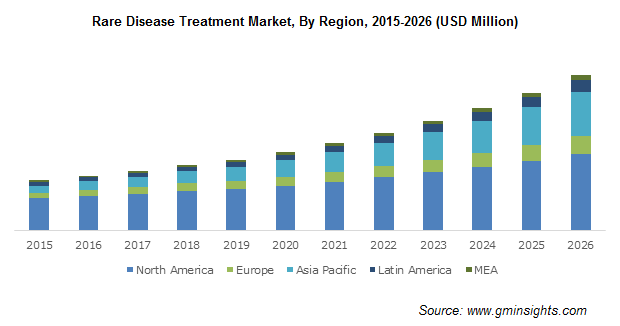 U.S. rare disease treatment market revenue was around USD 82 billion in 2019 on account of the improved economy and rising healthcare expenditure resulting in increasing the development of research institutions in the country. Growing number of government initiatives in the region is also contributing to the market growth trends in the country. According to a published report, the orphan drugs act under the U.S. legislation allows manufacturers to request FDA to grant orphan drugs status to drugs in order to treat a rare disease or condition. Hence, such initiatives have the potential to expand the industry in the country.

Japan dominated the rare disease treatment market in Asia Pacific and was valued at more than USD 10.3 billion in 2019. The high market size is owing to the increase in biomedical and regenerative medicine research in the country. Japanese government has established support systems and special regulatory authorities to augment the development of novel drugs for rare disease treatment. The support system measure in Japan includes grant-in-aid for research programs along with price control policies negotiated by Japanese National Health Insurance (NIH) and pharmaceutical companies, and medical reimbursement for 56 diseases.

Some of the major players operating in the rare disease treatment market include AbbVie Inc., Actelion Pharmaceuticals Ltd, Alexion Pharmaceuticals, Inc., Celgene Corporation, Bayer AG, Johnson & Johnson Services, Inc., Novartis AG, Pfizer Inc, Sanofi and Eli Lilly and Company. These players are implementing several strategic acquisitions, mergers, collaborations and partnerships in order to expand customer base and strengthen their industrial position. The investment by these players in recent years has created opportunities for the global expansion of the industry.

The rare disease treatment market research report includes an in-depth coverage of the industry with estimates & forecast in terms of revenue in USD from 2015 to 2026, for the following segments:

The global market share for rare disease treatment is anticipated to register over 12.2% CAGR over the estimated period with increasing R&D for the development of novel therapeutic drugs.
Biologic drugs segment in the industry vas valued at over USD 124 billion in 2019 as they have the potential to elicit an immune response in the recipient and are developed to treat rare genetic disorders.
The cancer therapeutics segment is estimated to expand at 12.5% CAGR up to 2026 with high incidence of critical outcomes from rare cancer disorders urging researchers to formulate effective treatments.
In 2019, the U.S. market recorded revenues worth USD 82 billion owing to higher spending on healthcare and robust investments in clinical R&D.
Customize this Report
Inquiry Before Buying