Power Optimizer Market size in 2018 exceeded USD 1 billion and is anticipated to exceed an annual installation of 30 million units by 2025. 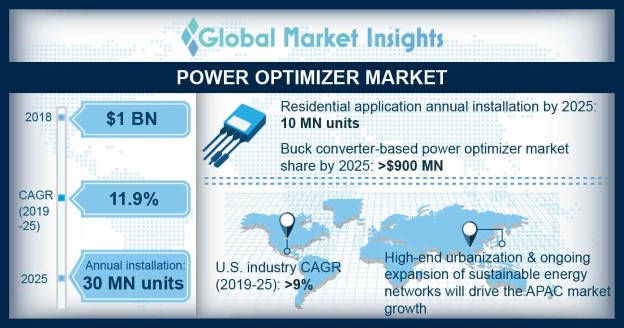 Rising environmental concerns in line with stringent mandates to curtail emissions have aligned industrial inclination toward the integration of effective energy conservation measures. Power optimizers in the recent years have emerged as core components across modern-day solar power plants. Regulatory & operational re-structuring across prominent power markets supported by rapid technological enhancements in the fields of product operation, efficiency, and flexibility have been pivotal for this evolution.

Stand-alone connectivity segment has largely been influenced by the upsurge in energy demand across regional peripherals witnessing limited grid access or complete isolation. The expansion of micro-grid networks for large-scale renewable integration has instituted a favourable business scenario in developed countries across the world. Furthermore, advanced distributed generation technologies along with the rapid expansion of sustainable electric networks will stimulate the product demand.

Regulators across the globe have continuously been focusing on the extension and development of plans, reforms, and schemes to support grid-scale solar deployments. Introduction of portfolio standards, energy efficiency accord, clean energy drives, green bonds, and renewable certificates are a few regulatory measures fuelling the overall power optimizer market growth. Although, the regulatory and industrial prospects pose a significant growth potential, the industry continues to witness a modest growth subject to the persisting financial impediments.

Residential power optimizer market is anticipated to surpass an annual installation of 10 million units by 2025. Reforms including feed-in tariff, subsidies, incentives for grid-tied solar roof-top installations favoured by stringent mandates toward the manufacture and integration of effective optimizer technologies will further streamline the product adoption. In addition, government rollout plans with an aim to support residential roof-top deployments favoured by incremental energy efficiency accord will stimulate the product adoption. 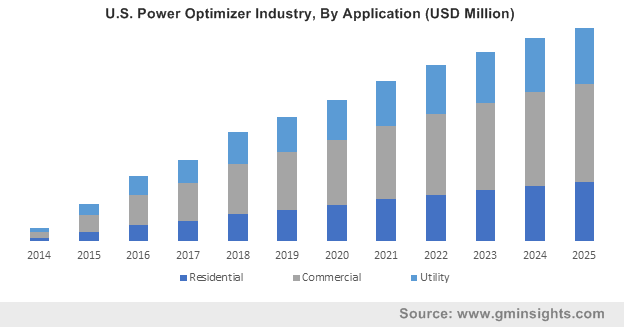 Large-scale industrial and utility-based power optimizer market has significantly been influenced by government mandates and targets in line with COP21 and energy optimization. Increasing focus toward curbing emissions from large industries and generating plants pose an immense potential for technological deployment. In addition, the integration of advanced monitoring units to assess plant performance coupled with the concerns to reduce the dependency on fossil fuel will further pave ways for technological enhancements.

Power Optimizer Market, By End Use

Optimizers have emerged the industry as an alternative for module level power management & monitoring, coagulating the advantage of module level MPPT with high operating efficiencies of string inverters. Furthermore, benefits including mitigation of module shading impact, module mistmatch, and under or over performing modules will complement the power optimizer market outlook.

Buck converter-based power optimizer market is predicted to value over USD 900 Million by 2025. These are DC-to-DC power converters which step down voltage from input to their output. It is a type of switched-mode power supply typically containing two semiconductors (diode & transistor, although modern day converters generally replace diode with a second transistor, for synchronous rectification) and one energy storage element, an inductor, capacitor or the combination of two.

Stringent norms pertaining to the capping of feed-in tariffs and incentives in the recent years have obstructed solar deployments across European countries. However, regulators have continually been focussed towards decentralized energy storage systems along with PV units through the provision of investment grants. In addition to the existing measures across all the European member states, the European Commission has levied numerous legislative measures with an aim to support renewable integration across the region which in turn will fuel the market penetration.

The U.S. power optimizer market is set to expand over 9% by 2025. Solar power is more prevalent, accessible, and affordable across the North American sub-continent than ever before. Solar energy markets are rapidly maturing and solar electricity has been economically competitive across the region when compared to conventional energy sources. In addition, as the cleanest available domestic energy source, solar supports broader priorities including economic growth, national security, job creation, and climate change mitigation. 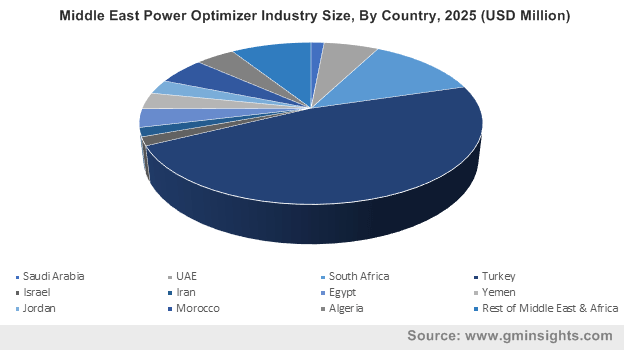 Mergers and acquisitions with an aim to diversify technological portfolio have been a primary phenomenon across the industry landscape.

The market size of power optimizer was exceeded USD 1 billion in 2018.
The industry share of power optimizer is poised to grow at over 11.9% CAGR between 2029 and 2025.
According to this research report by GMI, the U.S. market is set to expand at over 9% CAGR during the forecast period.
The stand-alone connectivity sector has been influenced by a surge in energy demand from regional peripherals witnessing complete isolation or limited grid access.
The residential application segment is anticipated to surpass an annual installation of 10 million units by 2025 as government rollout out plans with a purpose to support roof-top deployments across residential establishments supported by incremental energy efficiency grant.
Prominent industry players include SolarEdge, SMA Solar, Tigo, Altenergy, Ampt, igrenEnergi, Huawei, Kuby Renewable Energy, Darfon Electronics, Maxim Integrated, Texas Instruments, GreenBrilliance, Xandex, Mornsun, Ferroamp, Alencon, ABB, and Fronious.
Customize this Report
Inquiry Before Buying