Pet Care Market size was valued over USD 190.1 billion in 2018 and is expected to witness 5.2% CAGR from 2019 to 2025. Growing pet adoption for companionship has led to increase in spending on pet care. Also, high disposable income and rising prevalence of zoonotic diseases has augmented spending on pet animal healthcare. 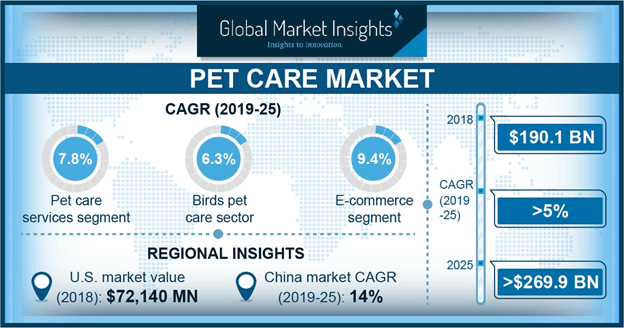 Majority of pet owners consider their pet as a family member; hence they undertake numerous efforts to take proper care of their pets. According to recent data, nearly 68% of households in the U.S. at present have a pet. Hence, above mentioned factors will be responsible for the market growth.

Increase in pet adoption across the globe will be a major factor driving the business growth in the near future. Growing usage of pets in films and ad campaigns has triggered the notion of pet adoption among general population. Furthermore, pet fair trades including the India International Pet Trade Fair (IIPTF) showcasing wide range of pet care products will positively impact industry growth. 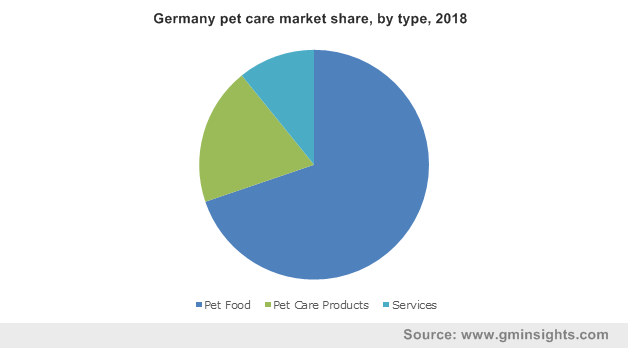 Pet food market was valued at USD 81,241.7 million in the year 2018.  Growing pet ownership, especially in developed nations will highly impact the adoption rate of pet food over the future years. Moreover, rising expenditure on pet care will offer high growth potential to the market. As per the American Pet Products Association, the U.S. population spent approximately USD 72.5 billion in the year 2018 as compared to 69.5 billion in 2017. Hence, increase in number of pet adoption and pet care expenditure will augment the business growth in the near future.

Dogs pet care market demand was valued at USD 81,618.5 million in the year 2018.  Growing adoption of dogs for companionship coupled with increasing expenditure for dog health will boost market growth in the future. Growing disposable income in developing economies and launch of advanced dog specific products will spur segment growth during the forecast timeframe.

Birds care segment is estimated to grow at 6.3% over the forecast period. Birds are preferred as pets or companion animals owing to their brilliant colors, ability to communicate, intelligence and graceful aerial skills. One of the major reasons for adopting birds as pets is companionship. More than 190 million birds are adopted as pets in Brazil. Birds act as one of the major stress relievers. Growing adoption of birds as companion animals will drive market for bird care products in the future.

Distribution via stores held majority pet care market share and was valued at USD 130,216.3 million in the year 2018. Pet stores segment is expected to witness steady growth during the forecast timeframe owing to increasing expenditure on pet care coupled with growing adoption of cats, dogs, fish and other species as companion animals.

Distribution via e-commerce segment such as online retailers and websites is estimated to grow rapidly at 9.4% over the estimation period. Preference for e-commerce websites for pet care products is growing among pet owners as they are willing to spend more on pet care and grooming products. Also, various pet care brands are opting to sell their products online as they get a greater number of customers online. Hence, the distribution or sales of pet food and pet care products via e-commerce is estimated to grow significantly in the near future. 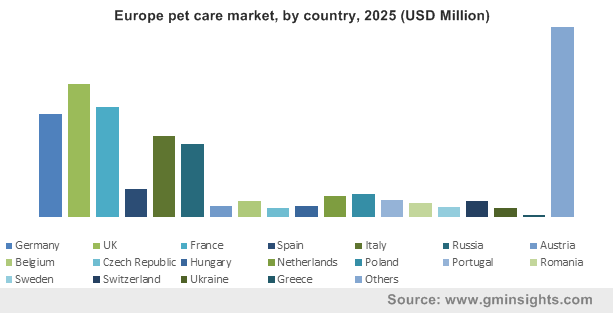 U.S. dominated the North America pet care market growth and was valued at USD 72,140.0 million in the year 2018. As per the National Pet Owners Survey 2017-2018, around 68% of the American households own a pet. Also, increase in humanization of pets along with several pet grooming services available will result in boosting the country market growth. Numerous established and new market players in the region along with increasing initiatives to expand their footprint in the pet care industry will highly impact the business size.

Chinese market is estimated to show fastest growth at 14% over the estimation period. As per the recent research article, the total number of pet dogs and cats in China exceed around 90 million currently. Also, the number of people opting for pet adoption is increasing at a rapid rate in China, resulting in boosting the business growth.

Pet care industry is growing and changing at a significant rate on a global level. The major reason for the market growth is due to growing pet population, increase in trend of pet humanization along with growing demand in developed and emerging markets. Major business segments include pet food, pet products, and pet services. Pet food is estimated to have a future focus on old and obese pets, whereas pet products will have more technological implementations in the future.

Over the last few years, the sales of pet care products has increased, that has resulted due to increase in the pet population, greater variety of diets, increase in use and consumption of pet food along with the benefits and value for money that pet foods offer. Scientific advancements in pet nutrition and medicated food has resulted in increase in demand and adoption rate of pet food.