Permanent Magnets Market size was worth more than USD 20 billion in 2015 and is likely to grow by CAGR over 10%. Escalating wind energy consumption as a renewable and dependable energy source owing to the diminishing fossil energy reserves is expected to fuel the overall market size by 2024.

Growing usage of wind energy, especially in Asia Pacific, will positively impact the product market. China is heavily leading the wind energy sector across the globe. For instance, based on the data from Global Wind Energy Council (GWEC), windmills installed globally in 2015 were generating close to 60 GW, which will substantially increase by 2019 to reach 75 GW. China captured almost a third of the global wind energy share. This scenario is projected to propel the permanent magnets market share in the coming years. 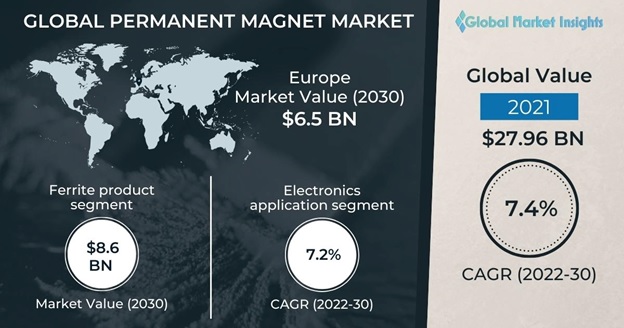 Moreover, the product attains further application in the automotive industry due to its repulsion, attraction and energy conversion properties. The mounting per capita income in several developing economies will directly surge the total automotive production. For instance, in 2015, total commercial vehicles and passenger cars production rose to 90.5 million units compared to 87.5 million units in 2013. This global surge in automotive production is anticipated to propel the permanent magnets market by 2024.

Inconsistent and high raw material prices for rare earth magnets may affect the permanent magnets market by 2024. Furthermore, the accumulation of rare-earth metal reserves in Asia Pacific, especially in China, has escalated the raw material prices in Europe and North America. However, improvements in magnet production technologies to lower the manufacturing costs will generate copious opportunities for the overall permanent magnets market sales in the forecast period.

The market is categorized on the basis of magnetic materials used in its conversion process into ferrite, neodymium alloy (NdFeB), aluminum–nickel–cobalt alloy (AlNiCo) and samarium–cobalt alloy (SmCo). The neodymium alloy segment garnered a revenue close to USD 15 billion in 2015 and is subjected to grow with a CAGR of over 10% by 2024.

Neodymium alloy-based materials, also termed as neo magnets, were developed by General Motors and Sumitomo in 1982 and commercialized in 1984. It captured around two-third of the revenue share in the total permanent magnets market segment in the forecast timespan. 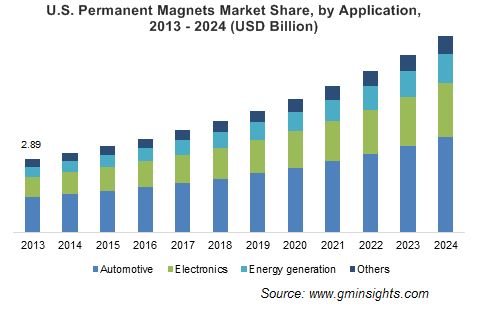 Based on its application, the market is segmented into energy generation, automotive, electronics and few other applications. Electronic applications segment recorded a revenue of over USD 5.5 billion in 2015 owing to the rising demand for cars and commercial vehicles, fueling the product market size by 2024. The magnets here are exercised as energy transfer tools that finds application in sensors, meters, actuators, alternators, speakers, and various other electronic accessories.

North America registered a revenue of over USD 4 billion in 2015 and will escalate with a CAGR of over 9% in the forecast period. North America recorded a revenue surge in its product market size due to the propelling U.S. commercial vehicle and passenger cars production traversing over 12 million units in 2015. The U.S. also documented a collective windmill installation capability of around 75 GW in 2015 and is projected to rise considerably in the coming years.

Asia Pacific permanent magnets market value recorded a revenue of more than USD 10 billion in 2015, mounting with a CAGR over 10% in the forecast timeframe. The increasing production capabilities in various industries such as electronics, automotive, wind energy, etc., primarily in China will swell the overall product market size by 2024. For instance, in 2015, China possessed a collective windmill installation capacity of over 145 GW, that was around one-third of the global installation capacity. Growing demand for wind energy in India will further boost the regional demand over the forecast span. India accounted for 25 GW of install wind power capacity in 2015 and is likely to witness tremendous growth over the coming years.

The global market contains a vast number of manufacturers from Asia Pacific because majority of rare earth metal mines are controlled by China. The market is excessively competitive with organizations backing on joint ventures, acquisitions and investments in R&D to gain a competitive edge over its competitors. For instance, Hitachi Metals Ltd., in order to increase its production capability, invested in an advanced production line in October 2016 for manufacturing ferrite magnets and NdFeB.

Global permanent magnets market share is anticipated to grow at high rate due to the advancements in its application sectors during the forecast period. Rising consumption for strong and light weight magnets will propel the demand for NdFeB based products that are aesthetically and functionally superior to conventional ferrite magnets. It finds extensive application in high temperature, low power and/or external usage products. Moreover, product usage for energy conversion to create electricity will offer an elevated influence during the forecast timespan.

Permanent magnet market report includes in-depth coverage of the industry with estimates & forecast in terms of volume in tons & revenue in USD million from 2013 to 2024, for the following segments: