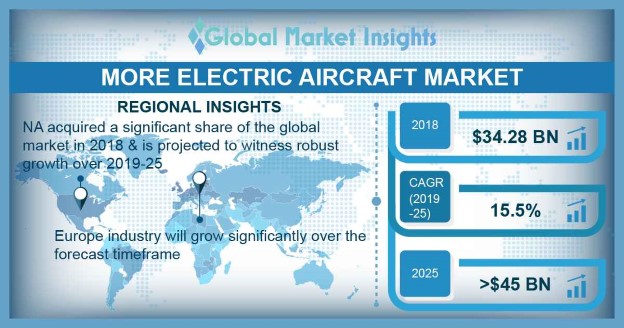 Increasing requirement for fuel efficient, lightweight, and durable aircraft along with reduced maintenance and operating expenses will drive the more electric aircraft market share over the projected timeframe. The replacement of traditional aircraft components including mechanical, pneumatic, and hydraulic systems with electrical components and equipment, results in significant weight savings, thereby contributing positively towards improving efficiency and lowering carbon emissions. Moreover, rising focus on reducing dependency on traditional fuels owing to increasing costs are expected to boost the industry growth.

Stringent regulations pertaining to the reduction of greenhouse gas emission (GHG) and increasing flights across the globe on account of improving tourism industry will support the more electric aircraft market size expansion over the study timeframe. For instance, the IATA set a target of carbon emission reduction of around 50% by 2050, relative to the 2005 levels. Moreover, continuous encouragement of industry players to adopt Global Market-Based Measure (GMBM) for lowering emissions are further escalating the industry share over the study timeframe.

Industry players along with multiple government organisations are collaborating to develop efficient more electric aircraft technologies to improve the overall performance and reliability. For instance, the Clean Sky Joint Undertaking (CSJU) under the European Commission offers a common platform for public-private partnerships between the European Aeronautics industry players for developing and improving technologies associated with the more electric aircrafts.

The concerns related to the stability of electric motors at higher altitudes coupled with heat generation and higher initial costs may hamper the more electric aircraft market demand over the projected timeframe. However, industry players are continuously investing in R&D and developing reliable architectures for improving the core technologies and boosting the industry share. Multiple industry players and researchers are engaged in introducing integrated electrical system model, that enabled for improved efficiency and speed for more electric aircrafts, thereby boosting the industry growth.

Fixed wing accounted for a significant share in the more electric aircraft market. This can be attributed to the increasing demand for such aircrafts from military. The benefits offered by these aircrafts including lower noise emission and limited detection through ISR at low flight height is further escalating the platform demand. The incorporation of electro hydrostatic actuators in such aircrafts for efficient power distribution along with improving efficiency further supports the segment share over the study timeframe.

Rotary wing will showcase considerable demand in the more electric aircraft market revenue over the forecast timeframe. This can be credited to the rising investments by aircraft manufacturers for introducing low cost and reliable helicopters for a wide range of applications including military combat, surveillance, emergency backup, and tourism among others. The lower maintenance costs coupled with improving efficiency are some of the major factors enhancing the segment share. Moreover, the diversified range of applications including vertical take-off and landing operations, along with the capability to hover further improves the segment share over the study timeframe.

Energy storage will account for a considerable share in the more electric aircraft market led by increasing usage of batteries in these aircrafts for powering the electronics. Moreover, the higher battery energy density required for ensuring reliable flight operation across diversified altitude along with increasing requirement for auxiliary power units are expected to positively influence the segment share. The longer life cycle coupled with the reduced memory effect issues are providing a positive outlook for the more electric aircraft market value expansion. 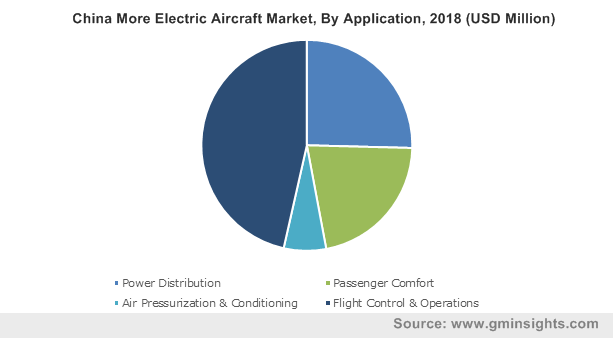 Passenger comfort will account for a considerable share in the more electric aircraft market owing to the rising preference for airline operators to equip their aircrafts with premium and superior in-flight entertainment systems for enhancing the customer travel experience. The rising preference for on-demand mobile applications enabling users to sync their media with in-flight entertainment devices along with innovative lighting systems are accentuating the segment demand. Airbus and Boeing offer mood lighting capabilities in their 787 Dreamliner and A380 aircrafts with rainbow palette of colour schemes, thereby driving the more electric aircraft market share.

Flight control & operations will account for the maximum share over the projected timeframe with the requirement for reliable and efficient technologies for felicitating a wide range of operations across diversified altitude conditions. Moreover, the utilization of appropriate sensors and hardware for maintaining aircraft safety and supporting navigation and communication with the air traffic controller further accentuates the industry size. 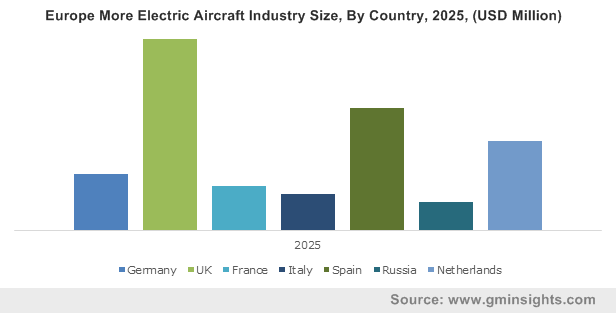 Europe more electric aircraft market will showcase significant growth over the projected timeframe due to the stringent regulatory policies and norms across the region pertaining to aircraft emissions. Moreover, supporting initiatives and research programs by European governing bodies including the Clean Sky Joint Undertaking are further expanding the regional market share. Moreover, increasing GHG emissions are encouraging aircraft manufacturers to adopt more electric aircrafts. For instance, according to the European Commission, in 2018, aviation emission accounted for nearly 3% of the total regions GHG emissions.

Ongoing projects such as COPPER Bird to support European research programs to test and validate the systems and architecture of more electric aircrafts are providing a positive outlook for the industry expansion. Technological advancements and innovations in engine are expected to positively drive the market share. For instance, in October 2018, Safran launched its ENGINeUS electric motors, that offers significant performance benefits along with superior reliability. Regulatory bodies including International Air Transport Association (IATA), Federal Aviation Administration (FAA), and International Civil Aviation Organization (ICAO) are offering multiple standards and regulatory policies, that are aimed at reducing carbon emissions from aircrafts, thereby supporting the demand for such aircrafts.