Microporous Insulation Market Size was estimated over USD 400 million in 2018 and the industry will grow at a CAGR of more than 18% up to 2025 owing to the escalating demand from growing automotive, aerospace and other transportation industries in developed and developing countries.

Microporous insulation is a high-performance thermal insulation that finds extensive usage in various end-use applications, which mostly operates at high temperatures of around 600 °C and above. In addition to low thermal conductivity, it also offers high compression resistance and low heat storage properties, which increases its demand in heat treatment furnaces, melting furnaces, induction furnaces, fuel cells, and other energy applications. 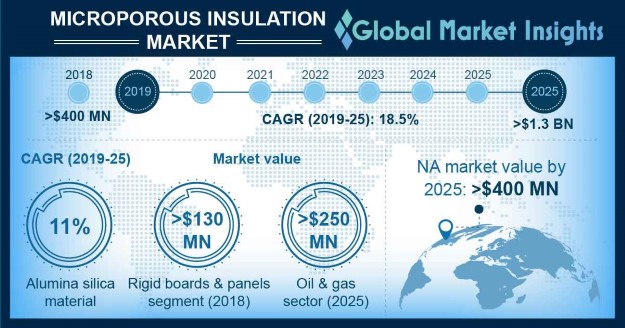 Growing oil and gas exploration activities across the world, and particularly in Middle East is another factor. Recently, China has agreed to invest around USD 400 billion in Iran's oil and gas sector, which also includes petrochemicals, transport & energy-related production in the region for the coming 25 years, as a part of China–Iranian investment deals signed in 2016.

Additionally, growing investments in automotive, aerospace and defense sector in Asia Pacific region predominantly in India, China and Japan will further drive the microporous insulation market during the forecast spell. Furthermore, its low shrinking ability and non-combustible nature will increase its demand in forehearths and feeder bowls, holding furnaces and recuperator in glass manufacturing industries.

High manufacturing and operational cost may restrain the microporous insulation market share in the near-term, which will reduce the profit margin among product manufacturers and suppliers. Moreover, carcinogenic nature of alumina silica may also affect the market over the forecast spell. However, its growing usage in storage heating, domestic ovens and other home appliances will boost its demand during in the near future.

The microporous insulation market by material is segmented, into alumina silica and calcium magnesium silicate. the alumina silica-based segment is anticipated to grow with a rate close to 11% CAGR by 2025. Moreover, the calcium magnesium silicate dominates the segment that nearly generates a revenue of USD 400 million and is likely to accelerate with an exceptional rate by 2025 due to its extremely low thermal conductivity and high thermal stability, which increases its demand for various industries that operates under high temperatures such as transportation and energy & power.

Microporous insulation market is categorized into flexible panels, rigid boards & panels and others, that mainly includes moldable, machined, and pourable microporous insulations. Flexible panels in the segment accounted for nearly half of the entire market in 2018 and is likely to grow with a significant rate during the forecast spell as it offers better mechanical resistance against impact and vibration. The segment is followed by rigid boards and panels, which illustrates a reasonable growth in the segment owing to its increasing usage in metal works and other end-use sectors. 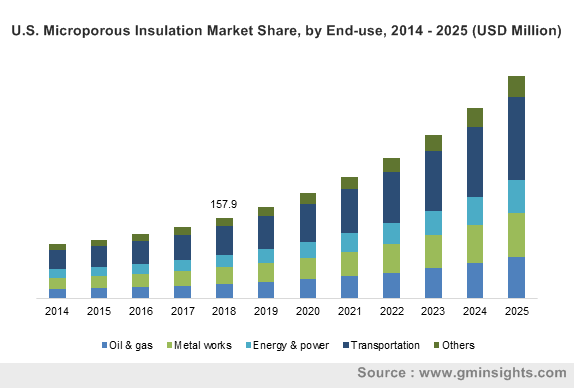 The end-user sector in the microporous insulation market is categorized into oil & gas, metal works, energy & power, transportation and others, that mainly includes glass manufacturing and consumer appliances. Transportation sector that consists of automotive, aerospace and marine industries dominates the segment, which generated a revenue of more than USD 140 million in 2018 and is projected to grow with a significant rate in the near future, driven by its high thermal stability, low thermal conductivity and light weight nature. The segment is followed by oil & gas industry and energy & power sectors.

North America and Europe dominates the microporous insulation market growth with a combined share of more than 60% and is expected to observe a reasonable growth in the near term. However, Asia Pacific and Middle East region is expected to grow with a significant rate over the forecast period due to government favoring regulations for automotive and manufacturing industry in the regions. Moreover, increasing demand for energy in the regions will further propel the product usage in power and oil and gas industries for various insulation applications. Furthermore, increasing product demand in metal works, glass manufacturing, and consumer appliances industries will positively augment the product market size globally.

Microporous insulation is a form of high-performance thermal insulation that operates especially at very high temperatures, which increases its demand in various end-use sectors. These insulations are predominantly made from alumina silica or calcium magnesium silicate held together with reinforcing glass materials and other opacifiers that minimizes infrared radiations. Mostly, these insulations are available in flexible panels, rigid boards & panels, and other product types which find application in oil & gas industry, metal works sector, energy & power sector, transportation sector and other end-use sector.

Microporous insulation market report includes in-depth coverage of the industry with estimates & forecast in terms of revenue in USD million from 2019 to 2025, for the following segments: