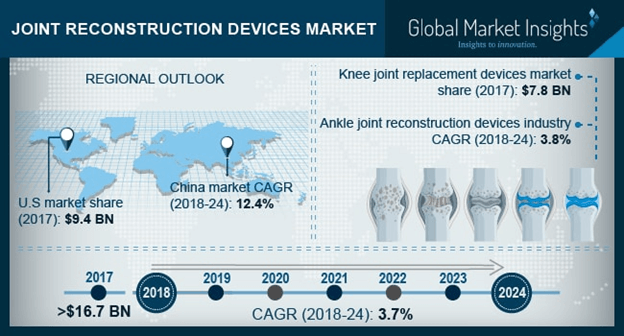 Rapidly expanding aging population base along with increasing number of centenarians, estimated to reach around 4 million by 2050 across the globe will drive the demand for various joint replacement devices. With rising incidences of orthopaedic diseases such as Osteoarthritis and other musculoskeletal disorders that causes joint pain, stiffness and inflammation; the need to address them will only rise in near future. Also, increasing life expectancy especially in emerging economies is resulting in more cases related to joint disorders; therefore, the demand and adoption rate of the joint reconstruction devices must increase multi-folds, fuelling the market growth.

Prevalence of orthopaedic disorders in Middle East and African countries has risen significantly in the last few years. A large section of total population in UAE suffer from Rheumatoid Arthritis; in fact, around 20% of population is currently affected by arthritis and a significant proportion remains undiagnosed. Rise in number of musculoskeletal disorder incidences along with large number of undiagnosed patient bases in the region will create ample market growth opportunities in joint reconstruction devices industry in the Middle East and Africa region.

Developed regions such as North America should experience slow but steady market progression, owing to introduction and adoption of new products, and their expanding availability in country sides. With increasing number of people undergoing joint reconstruction surgeries, there will be significantly impact the joint reconstruction devices market growth over the forecast period.

Knee joint replacement devices market valued around USD 7.8 billion in 2017. As per estimates, the total number of knee replacement surgeries across the globe are projected to grow at robust rate and by 2030, around 3.5 million procedures would be carried out annually. This rise in number of total knee replacement surgical procedures will lead to rising product demand, thereby boosting the joint reconstruction devices market growth over the projection period. Moreover, rising per capita healthcare expenditure in emerging economies should contribute to industry expansion.

U.S. joint reconstruction devices market valued around USD 9.4 billion in 2017; such a high valuation is attributed to escalated number for joint reconstruction procedure.  According to the study of American Academy of Orthopedic Surgeons (AAOS), in 2014, an estimated 4.7 million people in America had total knee replacement surgery (TKA) and around 2.5 million people have had total hip arthroplasty (THA). technological advancements, favorable insurance coverage policies and high disposable income will increase the number of total joint replacement surgeries, boosting the demand for joint reconstruction devices over the foreseeable future.

China joint reconstruction devices market is estimated expand at 12.4% CAGR during the projection period. Rising geriatric population across the country suffering from several musculoskeletal disorder will lead to growing demand for joint replacement implants. In China, around 1.2 billion people suffer from osteoarthritis, with 55% of them more than 60 years of age. Also, about 50,000 hip or knee replacement surgeries are carried out in China every year and the total number of joint replacement surgeries in China are increasing at a substantial rate, driving the overall industry growth.

Some of the leading players in join reconstruction devices industry are Stryker, Zimmer Biomet, Medtronic Spinal, Smith & Nephew, DePuy Synthes Companies, Integra LifeSciences and Aesculap Implant Systems. New technologically advanced products along with merger and acquisitions are some of the main strategies adopted to increase foothold in the market.

Joint reconstruction surgeries dates back to mid-18th century, but the modern-day joint replacement surgeries were executed in the 1960s and have progressed from basic surgical procedures to sophisticated total joint replacement procedures. Even with introduction of significant technological advancements, there are still several improvements being sought by several researcher and medical professionals. Already new research studies are being conducted to grow a new hip of natural bone. The joint replacement industry is expected to grow rapidly in the future and witness high success due to increasing life expectancy of the people, innovative product launches and advancement in medical technology. These factors will offer wide range of scope and opportunities for the rapid growth of industry.