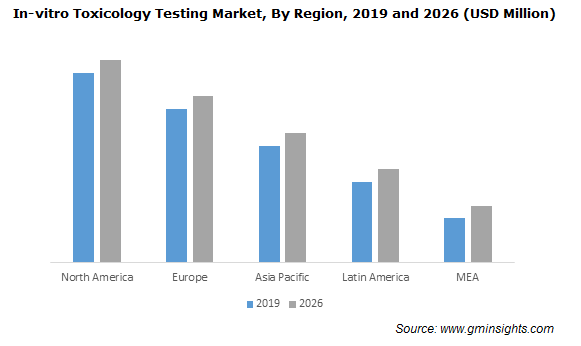 Ethical concerns regarding the use of animals for toxicity screening will primarily drive the market growth. The trauma and suffering endured by animals has caused growing concerns, especially among animal rights activists. Furthermore, medical professionals are questioning the efficacy of animal testing due to the genomic differences between humans and animals. Thus, these factors will contribute to the in-vitro toxicology testing market growth.

Technological advancements in the in-vitro testing market will contribute to increasing adoption of technology. Increased R&D efforts and emphasis on detecting toxicity at an early stage of testing have led to advent of sophisticated in-vitro testing technologies. Furthermore, there has been emphasis on using in-vitro testing techniques by government agencies such as the Food and Drug Administration due to their increased accuracy. These factors will spur the market growth over the forecast period.

However, the high cost of in-vitro toxicology testing models might dampen the market growth in the short run. Additionally, in-vitro testing systems do not replicate the interconnected organ systems in animals. These factors might restrict the adoption of in-vitro models over the forecast period.

The in-vitro toxicology testing market growth is segmented by products and services offered. The product segment includes consumables, assays, equipment, and software. The consumables segment will hold a substantial market share across the analysis timeframe. Consumables include reagents, media, and chemicals which require frequent applications in testing. Thus, repeated use of consumable products will boost segment growth.

By method of testing, the market is bifurcated into cellular assays, biochemical assays, in silico models and ex vivo models. The cellular assays segment will exhibit substantial growth over the forecast period. Cell based assays use live cell lines to study the effects of substances. Their wide application in screenings such as toxicity, viability, migration will boost the in-vitro toxicology testing market demand.

ADME toxicity testing will present a lucrative opportunity in the endpoint toxicity testing segment. ADME denotes absorption, distribution, metabolism, and elimination screening. ADME is a vital element of drug screening and around 50% of drugs fail due to unacceptable efficacy. It also tests for drug-drug interactions. These factors will augment the segment growth and boost the in-vitro toxicity testing market.

European in-vitro toxicology testing market will account for substantial share over the forecast period. The presence of key market players in the region and high rates of technology adoption will drive the product demand. Furthermore, the presence of multiple research institutes across the region will contribute to the regional market expansion.