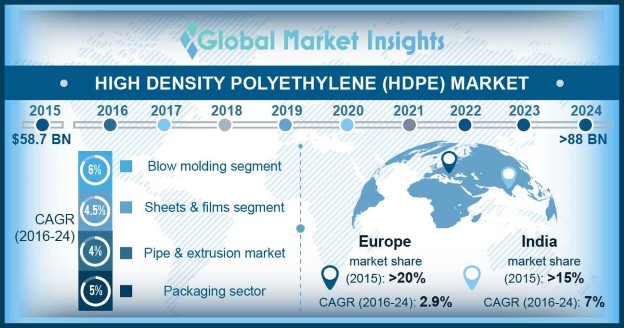 High density polyethylene abbreviated as HDPE, is a class of polymers produced mainly from petrochemical feedstocks. These thermoplastic polymers possess excellent strength to weight rations hence are widely used in the production of bottles, pipes, processing equipments and others. The global high density polyethylene market is anticipated to show substantial growth during the forecast period. The growing demand for high performance polymers across various industry verticals is set to drive growth throughout the forecast period. HDPE possess excellent properties such as tensile strength, moisture resistance, chemical resistance, and low cost which makes them suitable for various end user industries such as agriculture, building & construction, automotive, packaging and others. The growing construction industry across the globe is set to further boost the overall market during the forecast period.

HDPE is extensively used in telephone ducts, plumbing and electrical boxes, and pipes in the construction industry. The ongoing construction expenditure in the developing regions of Asia Pacific is projected to drive the market during the assessment period. Additionally, the growing demand for HDPE in packing industry is also anticipated to surge the overall HDPE market size during the review period. It widely used in the packaging of food and beverages. The corrosion and moisture resistive property of the product makes them highly desirable for packaging applications. The growing food and beverage industry across the globe coupled with the increasing penetration of on the go food products mainly in the developing regions shall drive the market demand throughout the forecast period. However, fluctuating crude oil prices is anticipated to be a major downside to the growth of the global market. The major raw material used is ethylene, a petrochemical feedstock. Thus, price volatility of crude oil directly impacts the ethylene prices in turn acting as a major restraining factor to the overall market growth.

The global HDPE industry is highly diversified with wide presence of manufacturers across the globe. Moreover, the high degree of forward integration can be seen in the overall market mainly between the manufacturers and the end users. Additionally, the raw materials manufacturers in this market are proficient petrochemical producers that possess excellent distribution channels. Some of the major raw material suppliers include ExxonMobil Chemicals, Unipetrol RPA, and PJSC Kazanorgsintez among others. 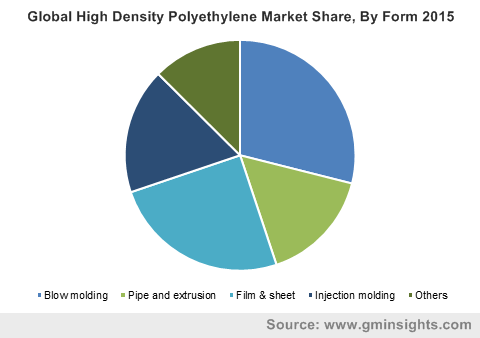 The blow molding form segment was the largest segment in 2015 and is projected to exhibit the same trend during the review period. The growing demand for blow molded HDPE bottles in dairy, water and other beverage packaging is anticipated to further augment the growth of the segment. Blow molded HDPE offers excellent properties such as tensile strength and temperature resistance which makes them highly desirable in these applications. The blow molding segment held a market share of over 20% in 2015 and is projected to grow at a CAGR of over 6%. The other major applications of blow molding HDPE are gas tanks, chemical tanks, pharmaceutical bottles and lubricant packaging among others.

Sheet and films was the second largest segment in the high density polyethylene market in 2015 and is anticipated to grow at an encouraging CAGR of over 4.5%. HDPE sheets and films are widely used in industrial reservoirs, floor linings, fuel tanks, agricultural tanks, meat packaging and others. These sheets and films exhibits excellent UV and thermal weathering resistance, very low permeability, and chemical resistance among others. Pipe and extrusion was another major form segment in 2015. Pipe and extrusion held a market share of over 15% in 2015 and is anticipated to grow at a CAGR of over 4%. HDPE pipe and extrusion are widely used in various industrial applications some of the major being industrial, municipal, marine, mining, landfill, oil, mining and agricultural applications. These pipes possess high tensile strength, flexibility and are lightweight in nature. Furthermore, HDPE pipes are environmentally sustainable and are corrosion & chemical resistant hence are widely preferred over other conventional pipes.

Packaging was the largest segment in the HDPE market in 2015 closely followed by the building and construction and the automotive industry. HDPE is widely used in the packing of pharmaceutical and food and beverages. The flourishing food and beverage industry across the globe coupled with rising demand for HDPE in cosmetic packaging is anticipated to drive the market during the assessment period. The packaging end user segment held a market share of 30% and is projected to grow at a CAGR of over 5%. Furthermore, the growing demand for high density polyethylene in niche applications such as household goods shall further augment the market size.

Asia Pacific was the largest revenue pocket in the global high density polyethylene market in 2015 and is projected to show the same trend throughout the forecast period. The rapidly increasing demand for personal care coupled with the growing constructional spending shall further aid to the market growth throughout the forecast period. Furthermore, the rising disposable income in the region has resulted in a surge in the demand for on the go food & beverages which in turn shall propel the market growth during the assessment period. Europe and North America were other major revenue generating regions in 2015 and shall exhibit the same trend during the assessment period. European HDPE market held a share of over 20% in 2015 and is anticipated to grow at a CAGR of 2.9%.