Hemodialysis Catheters Market size accounted for over USD 816 million in 2021 and is anticipated to register around 17% CAGR between 2022 and 2028. The progression in growth has been witnessed due to the scientific advancements in medical devices. Market players are taking up strategic initiatives to ace development and manufacturing of precise and cost-efficient hemodialysis catheters. 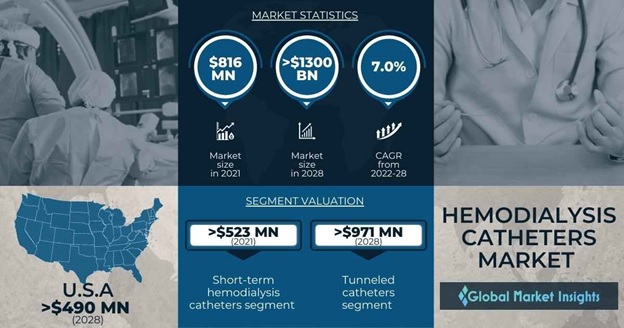 The influence of COVID-19 on surgical practice ranged from workforce and staffing difficulties to procedural prioritisation, intraoperative viral transmission risk, changes to perioperative practise and ways of working, as well as the impact on surgical education and training. as a result of this, hemodialysis procedures suffered a setback in the initial period.

Several international government agencies have amended key rules to ensure the utmost safety of patients and healthcare workers in the treatment and management of chronic diseases. Despite lower patient admissions during the pandemic, factors such as the decreasing number of COVID-19 cases, substantial proportion of the population suffering from chronic kidney diseases, rising number of renal replacement therapy, and other similar factors are cumulatively expected to boost the market expansion in the forthcoming years.

The rise in prevalence of chronic kidney diseases and end-stage renal disease (ESRD) is one of the key factors in driving the market growth during the analysis timeframe. For instance, as per the recently published article in 2019, the global prevalence of chronic kidney disease (CKD) is expected to be 13.4%, with an estimated 4.9 to 7 million individuals requiring renal replacement therapy.

Moreover, the Center for Disease Control and Prevention (CDC), in its recent report confirms that, around 37 million adults suffer from CKD, with many cases undiagnosed and over 360 patients prepare to undergo dialysis for kidney failure every 24 hours in the U.S.

Furthermore, in 2021, about 786,000 people in the U.S. were reported to have suffered with end-stage renal disease (ESRD). The prevalence of diabetes mellitus, hypertension, obesity, and ageing are all contributing to the rise in global chronic kidney disease. Other reasons, such as illness, herbal, and environmental toxins, are still common in some areas. Hence, the increasing prevalence of CKD and ESRD at an unprecedented pace will be instrumental factors in propelling the industry landscape.

These catheters are intended to satisfy the clinical requirements of hemodialysis, infusion, apheresis, and monitoring of primary venous pressure as well as high-pressure contrast injection patients.

The adoption of these devices is increasing significantly and is attributed to the upsurge in the incidence of acute kidney disorders due to infection, liver failure, heart failure, severe blood loss, etc. Liver failure is one of the major reasons for acute renal diseases that may cause morbidity or mortality in severe conditions.

For instance, according to the article published by the National Center of Biotechnology Information (NCBI) in 2018, stated that every year over 2 million people worldwide face mortality due to several liver diseases and around 1 million due to cirrhosis and hepatitis respectively. Moreover, increasing awareness related to short term hemodialysis catheters for the treatment of these acute renal disorders aids in driving the segment demand.

The hemodialysis catheter is usually implanted 1 to 2 cm from the skin exit site, with the cuff positioned subcutaneously. Tunneled hemodialysis catheters are typically used for intermediate or long-term hemodialysis vascular access. Advancements in medical devices have improved the safety and yielded better treatment outcomes over the years.

Based on material, the market is segregated as silicone and polyurethane. The polyurethane segment is anticipated to surpass USD 1,145 million by 2028. The notable growth in the segment is owing to the wide usage of polyurethane for manufacturing haemodialysis catheters. Polyurethane as a material is thermoplastic in nature, which makes it stiff at insertion, and further softens as it comes in contact with the body temperature.

This enables the hemodialysis catheters placement easy and ensures minimal disturbing to the surrounding tissue, thus decreasing the chances of infections. Moreover, the burden of renal diseases has risen to many folds over the years and reports link most of the renal diseases to be a sequela to primary chronic conditions such as diabetes.

By tip configuration, the market is segmented as step-tip catheters, split-tip catheters, symmetric catheters, and others. The step-tip catheters segment accounted for the leading market share, by garnering a revenue of around USD 337 million in the year 2021. The notable growth in the segment is owing to the efficiency a step-tip catheter offers during a hemodialysis procedure. The step tip catheters have less tip movement and lower recirculation rates, they ensure a consistent fluid flow pattern during hemodialysis. Long-term catheter placement is required for patients who are poor candidates for arteriovenous access creation.

Hemodialysis catheters can sometimes be associated with issues such as dialysate recirculation, thrombosis, catheter-related infections, and dysfunction. To address catheter-related issues, tip designs such as the step tip have been developed and is widely accepted. Thus, the above-stated points make the step-tip catheters a preferable choice to be employed during hemodialysis procedures for patients suffering from ESRD.

High cholesterol burden may result in higher prevalence of kidney disorders and thus, may lead to greater adoption of double-lumen catheters 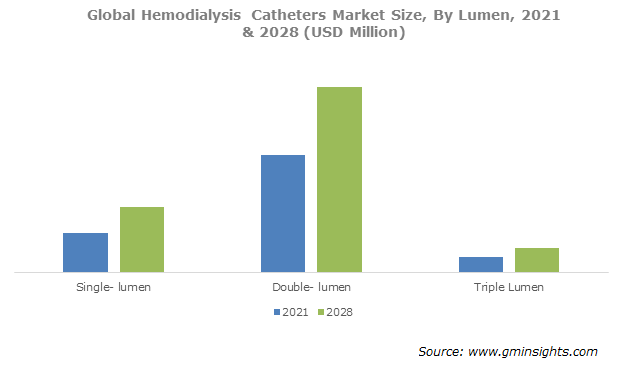 Based on lumen, the market is segmented as single-lumen, double-lumen, and triple-lumen. The double-lumen segment was valued at around USD 555 million in 2021. The double lumen catheters are often composed of polyethylene or polyurethane material and are simple to use and can be placed directly during procedures to provide independent venous access. It allows two incompatible fluids or medications to be injected at the same time. It has several advantages, including the ideal balance of flexibility and durability that makes it widely adopted lumen type for hemodialysis procedures.

Moreover, a 2019 study cited in the NHS, states the occurrence of high blood pressure, high cholesterol, kidney infections and kidney stones are linked to chronic kidney disease. As per a report published by the CDC, around 94 million adults, aged 20 or older in the U.S. suffered high cholesterol, having total cholesterol levels greater than 200 mg/dL. As a result, the hemodialysis catheters market is expected to rise at a faster rate throughout the forecast period.

U.S. hemodialysis catheters market is anticipated to reach over USD 490 million by 2028. The significant revenue share of the market is primarily owing to the rising instances of renal disorders and shortage of kidney donors in the region. The progression of renal diseases has reported to result in renal failure in most cases.

With dearth in the number of kidney donors, the waiting time for patients requiring a transplant increase. The hemodialysis procedure is employed in such patients. As per an article published by the Penn Medicine in 2020, more than 90,000 people are on the waiting list for kidney transplants, but only around 20,000 are done each year. Almost 5,000 people on the transplant waiting list die each year without receiving a transplant.

Some of the major market players operating in the hemodialysis catheters industry are B. Braun Melsungen AG, Medtronic plc, Becton, Dickinson and Company, Teleflex, Baxter International Inc., and AngioDynamics among others. These major players are adopting various business strategies such as, commercial expansion, new product development & commercialization, distribution agreements for business expansion. Moreover, these players are investing heavily in developing products, thereby driving revenue generation in the industry.

Hemodialysis catheters market research report includes an in-depth coverage of the industry with estimates & forecast in terms of revenue in USD and volume in Units from 2017 to 2028, for the following segments: