Helicobacter Pylori Testing Market size valued at over USD 292 million in 2020 and is estimated to grow at CAGR of more than 11.1% between 2021 and 2027. The market growth is attributed to numerous factors including the rising prevalence of gastric ulcers, increasing elderly population, and growing adoption of non-invasive testing. In developing countries, the prevalence of the infection is highest owing to socioeconomic status and levels of hygiene. 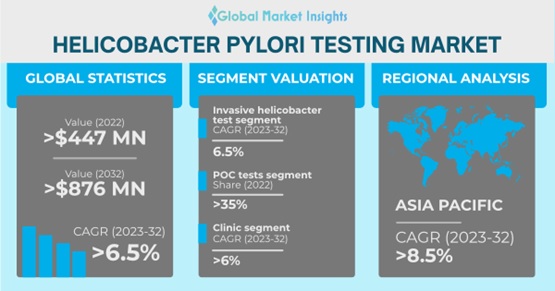 However, lack of awareness regarding helicobacter pylori testing and treatment in low as well as some middle-income economies can impede the market expansion during the forecast period.  Unawareness will impact the number of tests in diagnostic facilities, thereby negatively affecting the product acceptance rate. This can be further credited to the limited number of research and informative studies on H. pylori infection and its effects on health.

Additionally, underdeveloped as well as some developing nations are facing issues reading limited healthcare resources. This leads to restricted access to healthcare services with insufficient facilities that further increases the chances of a lack of knowledge regarding such diseases and their diagnosis.

The recent outbreak of COVID-19 has negatively impacted the helicobacter pylori testing market revenue. The lucrative demand for COVID-19 testing has substantially impacted other disease testing services. During the initial period, the incidence, as well as the mortality rate of COVID-19, was highest, and people tended to avoid any other treatment or diagnosis procedures at facilities. The risk of infection during invasive helicobacter pylori testing at point-of-care facilities has resulted in procedure deferral.

Moreover, as the most common route of COVID-19 transmission is oral or nasal, the non-invasive tests including the urea breath test (UBT) possessed the highest risk of COVID-19 infection that has further restrained population preference during a pandemic. The disruption in point-of-care testing services, difficulties in product distribution, and supply chain with movement restrictions across borders has further impacted the revenue of industry players amid a pandemic.

The invasive segment in the helicobacter pylori testing market exceeded USD 129 million in 2020. The common invasive approach used in the helicobacter pylori testing include HP culture, rapid urease test (RUT), and histology. Invasive approach is used among the patients who are non-corresponding to antibiotic therapy, possess symptoms highlighting problematic gastric conditions, and the ones those need gastric endoscopy. In addition, the efficacy and affordability of rapid urease tests increase its adoption. The high sensitivity and specificity of these tests continue to increase its preference for invasive methods. Moreover, under certain conditions, the sensitivity and specificity could be further increased to deliver more accurate results. 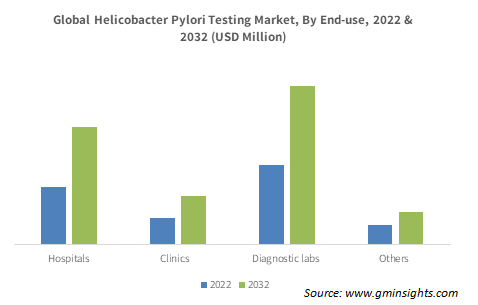 The helicobacter pylori testing market for diagnostic laboratories segment is expected to reach USD 279 million by 2027 owing to the availability of specialized and efficient diagnoses with rising awareness related to infectious diseases. The expansion of diagnostic laboratory chains with developing infrastructure providing clinical testing services for a wide range of diseases is poised to proliferate the industry revenue. Furthermore, the use of advanced screening mechanisms at diagnostic laboratories drives patient preference. 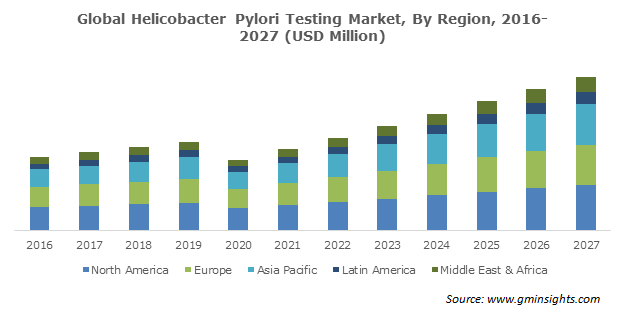 U.S. helicobacter pylori testing market size will cross USD 172 million by 2027 due to the growing prevalence of H. pylori infection and rising awareness regarding disease diagnosis and treatment along with government initiatives. The bacteria pose a high risk of stomach cancer contributing to the existing disease burden, thus, is predicted to surge the associated incidence and mortality among African Americans in the U.S. Additionally, technological developments in diagnostics and the presence of advanced healthcare infrastructure will fuel the country growth. Similarly, supportive initiatives adopted by the government is augmenting the industry demand.

Helicobacter pylori testing market research report includes an in-depth coverage of the industry with estimates & forecast in terms of revenue in USD from 2016 to 2027, for the following segments:

Market size of helicobacter pylori testing surpassed USD 292 million in 2020 and will grow at a CAGR of over 11.1% through 2027 with the rising prevalence of gastric ulcers and increasing geriatric population.
Invasive segment had recorded valuation of over USD 129 million in 2020 on account of increasing adoption for the patients who are non-corresponding to antibiotic therapy, possess symptoms of gastric conditions, and those requiring gastric endoscopy.
Point-of-care (POC) test segment captured 37% market share in 2020 owing to increasing R&D investments, collaborative research activities, and new product developments.
U.S. market size will surpass USD 172 million by 2027 with the rising cases of H. pylori infection and growing awareness regarding the disease diagnosis and treatment in the country.
The major companies operating in the market include Avanos Corporate, Abbott Laboratories, Biohit Oyj, Cardinal Health, Bio-Rad Laboratories, Inc., Exalenz Bioscience Ltd., Medline Industries, Inc, and Gulf Coast Scientific.
Customize this Report
Inquiry Before Buying