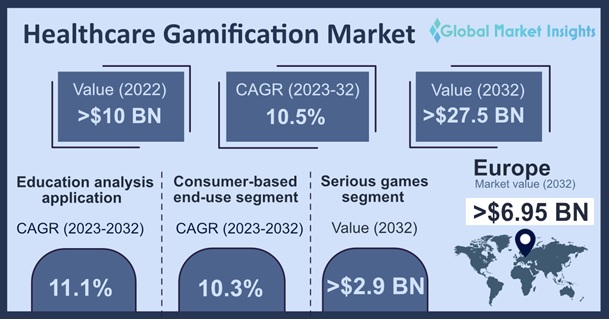 Healthcare gamification is defined as the process of applying game mechanics, gaming principles and design techniques to non-game applications so as to amplify the user engagement and substantial health related awareness. These largely incorporate daily trackers, progress bars and the capability to share results and also enabling users to socialize with peers. Largely, healthcare gamification has significantly influenced apps targeted for self-managed medication, fitness & nutrition, physical therapy as well as emotional health. With increasing smartphone usage and internet affordability, the demand has witnessed a spike in the recent years.

The increasing penetration of smartphone is one of the founding factors leading to the growing market demand for healthcare gamification. According to user surveys, it is poised that nearly 3.8 billion people use a smartphone in 2021, translating to over 48% of the global population. Further, the statistics also suggest a significant preferential shift of consumers from feature phones to smartphones. In 2016, nearly 4.3 billion mobile users were recorded comprising of 2.5 billion smartphone users. By 2021, the number of mobile users has increased to over 4.8 billion with nearly 3.8 billion smartphone users. This suggests that the preference for smartphones has increased over the past years and largely boosts the connectivity among users. This is one of the major reasons for the market growth. Internet connectivity through mobile devices has also observed a tandem growth over the past years and hence, largely contributes to the market expansion.

The increasing cases of COVID-19 across the globe has compelled the authorities to restrict the movement of people and goods across regions. This has considerably impacted the growth of each sector and every industry operating within. Large-scale organizations to small enterprises have showcased a shrink in sales. While some areas of the healthcare sector remain to be impacted, the demand for healthcare gamification has registered a spike. Since the onset of the pandemic, the community centres and other fitness institutions have remained shut in major parts of the world. This has compelled the users to resort to digital, app-based solutions.

The health and fitness mobile applications have remained an alternative technique to monitor and control activities, these have witnessed a limelight amidst the pandemic-like conditions. Moreover, as in-person consultation with doctors has also been limited, several developers are noted to include medical prescription tracking tools in the telehealth apps based on healthcare gamification principles.

The prominent health challenges leading to mortality and high prevalence of chronic diseases include risks such as high blood pressure, tobacco use, physical inactivity, obesity and high cholesterol among others. These are largely linked to a shifting lifestyle towards a sedentary routine, increasing stress and increasing consumption of unhealthy food. It is predicted that nearly three quarters of healthcare costs in U.S. are attributed to chronic diseases caused by poor health behaviours. Therefore, behavioural change has become one of the most popular area to reduce the burden of preventable diseases across the globe.

Hence, developers and clinicians alike are noted to collaborate, and devise applications based on healthcare gamification tools that can potentially motivate users and lead to small individual behavioural amendments. Such applications are known as serious games. For instance, Nike+, a system of activity tracking applications translates physical exercises into reward points. These are used by users to enrol in competitions and unlock achievements. The development of several such games is studied to have a noteworthy impact on the overall gamification industry, while also optimistically affecting the overall well-being of its users.

While healthcare gamification is targeted towards educating, monitoring, treating and preventing different types of healthcare disorders, these are mainly intended to cause a behavioural shift on an individual level. However, it is noted that the gaming principles and design techniques employed are largely leading to a short-term behavioural change and face difficulties in the long-term user engagement. One of the prominent factors leading to this is the absence of a standard model for effective gamification. Several apps are noted to reward points while some reward badges. Limited interoperability among applications is also one of the prominent factors that limits long-term user engagement. 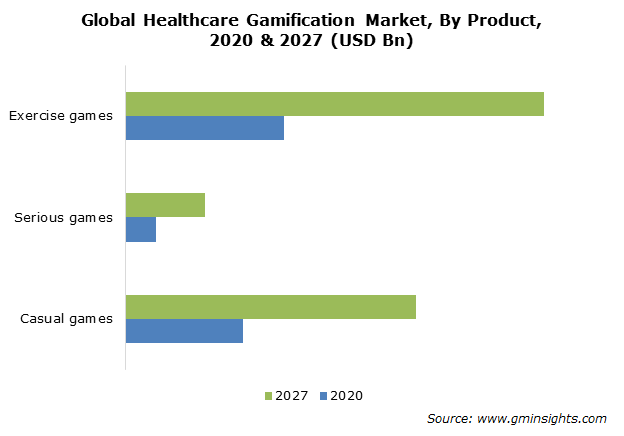 The exercise games segment dominated more than 51% of the market share in 2020. One of the leading factors fuelling the demand for exercise games is the increasing adoption among young adults and working population. The rising focus on fitness and increasing awareness surrounding healthy wellbeing is significantly augmenting the segment demand. Healthcare gamification models for fitness and exercise are also cost effective when compared to traditional fitness models devised by conventional fitness institutions, impelling the industry expansion.

The education segment in the healthcare gamification market is anticipated to reach USD 6.2 billion by 2027. A considerable demand has been observed for digital health apps intended for educational purposes in order to create awareness and guide users about the benefits of a healthy lifestyle. Healthcare gamification is also noted to be incorporated into medical education as it is noted to make learning fun, memorable and more effective. With the advantage of invoking intrinsic as well as extrinsic motivation, market is expected to observe a considerable segment growth over the forecast period.

The enterprise-based healthcare gamification segment accounted for USD 14.3 billion in 2020. Several employers around the world are noted to focus largely on the overall employee health and wellbeing are noted to make significant efforts towards enhancing it. Majority of the employers are noted to engage in sponsored wellness programs for their employees. It is slated that over 60% of the employer-sponsored wellness programs involve applications based on healthcare gamification and over 20% are interested in including such features in the coming years. 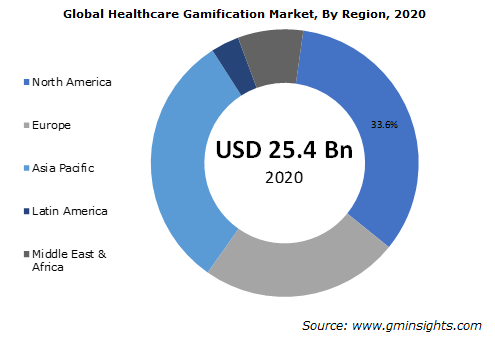 North America healthcare gamification market size was over USD 8.5 billion in 2020. Factors such as higher adoption rate and increasingly aware user base are some of the primary factors leading to the regional growth. Further, with a higher intensity of suppliers operating in the region, North America is estimated to dominate the market throughout the forecast period.

Prominent players operating in the market include Google LLC, Mango Health, Inc., Microsoft Corporation, Nike, Inc. Companies are noted to adopt organic and inorganic strategies to enhance their market presence and as well as gain competitive advantage in the industry.

The healthcare gamification market research report includes an in-depth coverage of the industry with estimates & forecast in terms of revenue in USD from 2016 to 2027, for the following segments: