Protein Market for Animal Feed Application size exceeded USD 265 Billion in 2020 and is estimated to grow at a CAGR of over 4.5% from 2021 to 2027. Animal feed protein is gaining popularity as a result of its capacity to boost the nutritional content of animal-derived products, thus boosting the market expansion for animal feed protein ingredients. 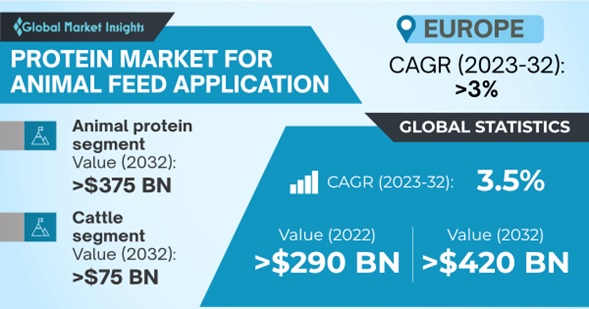 Growing importance of including proteins in livestock diets to ensure energy supply in balanced diet to reduce harmful impact of environmental and heat stress on animals which is likely to drive overall market size. Steady growth in animal feed production and consumption will favor the industry demand. For instance, as per Alltech Global Feed Survey in 2020, the global animal feed production volume exceeded 1.1 billion metric tons. Besides, increasing investments and focus towards livestock farming supported by favorable government initiatives to develop livestock sector will augmnet product adoption rate.

Plant based protein have its sources from soy, spirulina, hemp, rice, pea along with livestock feeds which include oilseed meals such as soybean, sunflower, canola, copra palm and cotton seed meal. Hemp meals are expected to significantly grow owing to its increased demand in the diet of pets and livestock due to the relatively high crude protein content. Further, soybean meal is versatile and major source of protein mainly for aquaculture, poultry, and pig feed thus supporting the protein market for animal feed application expansion.

Further, the increased production of meat and aquatic products, technological innovations in the meat processing industry particularly in North America are expanding the high-quality meat demand and accelerating animal feed additives market growth, promoting animal feed protein demand. Currently, feed production for aquaculture is increasing by about 6% to 8% per year which may favor fishmeal demand globally. Commercialization and development of other alternative feeds in the U.S. are expanding the shrimp aquaculture production. Also, the growing incorporation of fish meal obtained from fish waste products which helps in increasing palatability, nutritive value and improves feed conversion ratio is likely to contribute towards protein market for animal feed application statistics.

The feed industry has faced a few challenges in the year 2020, along with the agriculture and food industries. The feed production in some regions, namely such as Europe and Africa regions, cited more challenges than others. Owing to the COVID-19 crisis, the rise of e-commerce was seen around the world. However, global feed production is expected to increase at a considerable rate across the globe over the forecast timeframe. 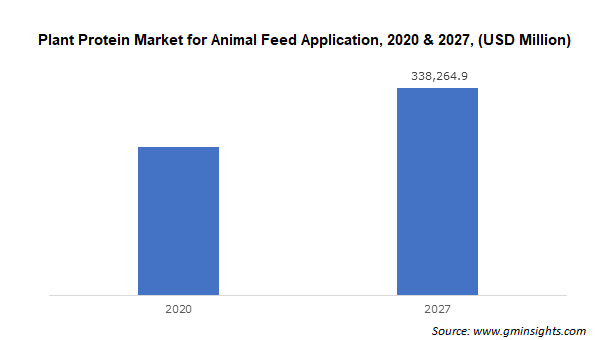 Based on products, protein market for animal feed application is bifurcated into plant protein, animal protein, alternative protein, and animal feed protein ingredients. The demand for plant protein products is anticipated to surpass USD 338.2 billion by 2027. Plant proteins are non-meat protein obtained from various plant-based sources such as soybeans, rapeseed, sunflower, wheat, peas, other cereals & pulses. Ease in availability along with cost-effectiveness is among the major factors supporting the plant-based proteins demand.

Plant protein types for animal feed applications include soy, rapeseed, hemp, rice, pea, and other sources. Soy accounted for more than 45% of the total market share in 2020 followed by rapeseed. Soy proteins are one of the most preferred alternatives of meat proteins, which has helped the feed manufacturers control costs and improve the profitability of their products. Similarly, rapeseed meal which is preferred owing to its high protein content is especially used as a feed for livestock and poultry. Further, the shift in human preferences for plant-based protein has also influenced the animal feed choices over the years. Plant-based protein preferences in pets' food diets have been demonstrated to closely resemble those of their vegan or vegetarian owners. The surge in demand for plant-based pet food as a result of increased knowledge among pet owners, pet owners' preference for organic pet food components, is expected to augment the demand for nutritious plant-based protein. 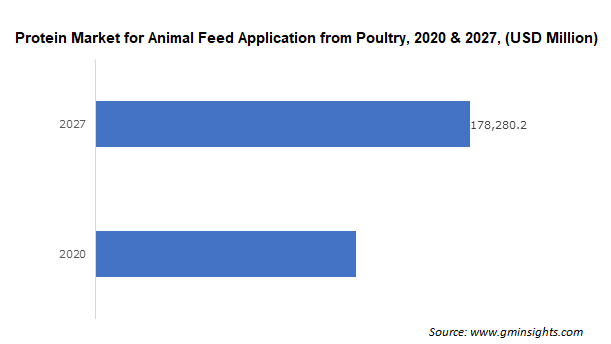 Poultry application segment is anticipated to surpass over USD 175 billion by 2027. Protein rich products are highly commendable for poultry production and nutrition due to importance of protein as a major constituent in biologically active compound in body. Significant growth in food processing technologies along with increasing demand for packaged and processed poultry meat items will fuel the segment growth. Rising per capita poultry meat production and consumption, primarily in China, Brazil, India and the U.S, will fuel the industry forecast. 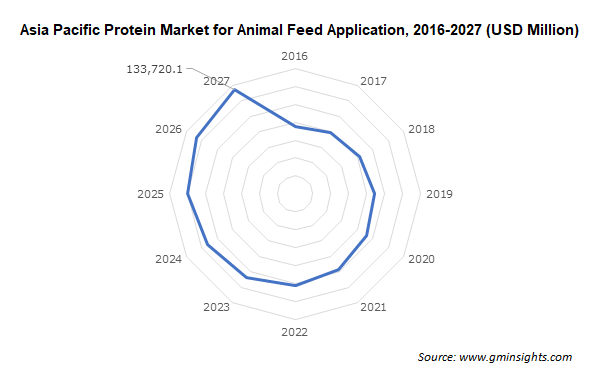 Asia Pacific protein market for animal feed application is projected to register over 5% CAGR between 2021 and 2027. Asia Pacific dominates the market owing to rising influence and awareness of livestock health supported by financial assistance through government subsidies and schemes. Moreover, presence of major feed additive manufacturing industries mainly in China, India, Japan, and Vietnam is likely to have a positive influence on the regional industry outlook. Besides, rising demand for frozen and processed meat products is likely to boost regional market share.

Further, the growth in the production of poultry products in developing countries like India, Taiwan, and Vietnam is attributable to transformation of poultry production from a backyard activity into a major commercial activity in recent years. This trend has influenced farmers to adopt new animal dietary patterns, which is anticipated to support business expansion. Also, factors such as increasing purchasing power and surging consumption of meat and animal derives products meat is anticipated to favor the overall industry demand.

New product development along with expansion, merger, acquisition, and collaboration is among the primary business strategies adopted by manufacturers

For instance, in July 2021, ADM announced that it has reached an agreement to acquire Sojaprotein, a leading European provider of non-GMO soy ingredients. The strategic initiative is expected to enhance the company’s production capacities in order to cater the growing demand for alternative proteins.

In August 2020, Hamlet Protein expanded its USA Poultry team by announcing the hiring of poultry nutritionist Kyle Brown. The company aims to achieve growth in the poultry segment in the markets of North & Central America

Global protein market for animal feed application research report includes in-depth coverage of the industry with estimates & forecast in terms of volume in Kilo Tons and revenue in USD Million from 2016 to 2027 for the following segments:

Protein market share for animal feed application surpassed USD 265 billion in 2020 and is expected to expand at a CAGR of 4.5% between 2021 and 2027 owing to the capacity of the product to boost the nutritional content of animal-derived products.
The market revenue from plant proteins will exceed USD 338.2 billion through 2027 driven by the advantages of cost-effectiveness and ease of availability.
Protein industry for animal feed application will record a CAGR of over 5% in APAC from 2021 to 2027 propelled by the soaring influence and awareness regarding livestock health and financial assistance via government schemes and subsidies.
Leading players across the protein industry for animal feed application comprise Nordic Soy Oy, Hamlet Protein A/S, CHS Inc., Archer Daniels Midland Company, Innovafeed, Darling Ingredients, Deep Branch Biotechnology, Agriprotein GmbH, and others.
Customize this Report
Inquiry Before Buying