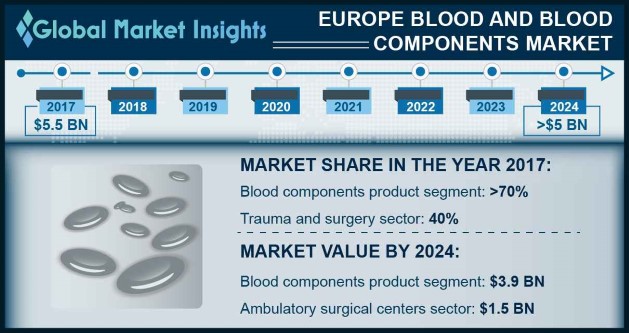 Substantial number of blood transfusions can be attributed to growing number of infectious diseases such as dengue, rising chronic diseases and bleeding disorders. Cancer patients require blood transfusions owing to anemia caused by the internal bleeding or low blood count due to invasion by the cancerous cells. As per the World Health Organization (WHO), with over 3.7 million new cases and nearly 1.9 million deaths every year, cancer represents the second most important factor for morbidity and mortality in the Europe. Thus, with increasing number of cancer cases, requirement of blood transfusions will gradually increase, thereby affecting Europe blood and blood components market size over the forecast timeframe.

Growing proportion of geriatric population, rising awareness and applications of blood derivatives in the upcoming period should sustain the demand for blood components in the region.  According to the European Commission, the old-age dependency ratio in Europe is projected to increase by 21.6%, from 29.6% in 2016 to 51.2% by 2070. Thus, increasing number of elderly patients ultimately increases the need for advanced therapies. In addition, application of blood derivatives including platelet rich plasma in anti-aging therapy will further augment demand for blood components in the foreseeable future.

However, high risk of infection from transfusion of blood or blood products may pose a challenge for blood and blood components market growth. Additionally, various initiatives were adopted by the European regulatory bodies to avoid wastage of blood and blood products such as, in some countries, programmes for ‘optimal use of blood’ are implemented during the recent period, to reduce unnecessary infections post blood transfusion as well as avoid wastage of blood. Red blood cells (RBCs) are mainly used in obstetrics, surgery, oncology and haematology care and apparently, due to such initiatives adopted in certain countries the use of RBCs has greatly reduced in the last decade, thus decreasing the market value over the forthcoming years.

Trauma & surgery segment accounted for major revenue share of about 40% in 2017. Booming number of injuries as well as surgical procedures will stimulate the use of blood and blood components in trauma and surgery cases. Deaths from injury have risen by 23% over the last decade. About 20-40% of deaths from trauma taking place post hospital admission, involve massive haemorrhage. Haemorrhage can be prevented by rapid haemorrhage control and better resuscitation techniques. Massive blood transfusion is necessary in majority of trauma cases for rapid restoration of lost blood. Similarly, blood transfusion during surgical procedures becomes necessary as a part of patient blood management. Thus, rising number of surgeries as well as trauma cases will positively influence adoption of blood and blood component in the coming years.

Cancer treatment segment will foresee relatively rapid growth over other applications owing to increasing cancer incidence in Europe. According to the WHO, Europe accounts for only 12.5% of the total world’s population but has around 25% of global cases of cancer with around 3.7 million new patients annually. Blood transfusion can be required for cancer patients due to factors such as surgeries or side effects of chemotherapy. Hence, patients undergoing chemotherapy treatment possess decreased ability to make new blood cells as they are unable to replace destroyed blood cells. Therefore, transfusion of RBCs and platelets is required to compensate for loss caused by chemotherapy. Thus, cancer treatment will impact demand for blood and blood components over the future years. 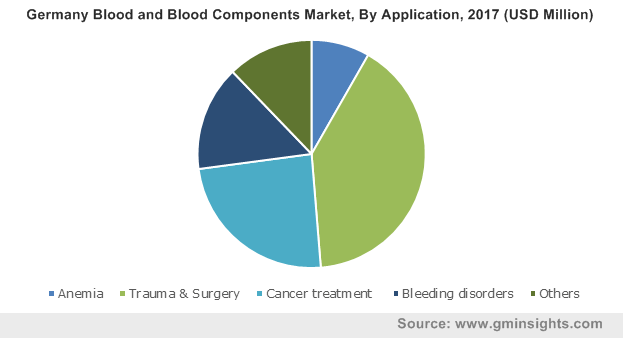 Hospital segment will witness substantial growth over the coming years owing to rising incidence of chronic diseases. 1 among 10 hospitalized patient undergoing invasive procedure, is transfused. Similarly, about 1,900 hospitals and clinics are provided with labile blood products in the Europe. With increasing number of cardiovascular diseases, cancer, infections, cosmetic procedures coupled with improving healthcare infrastructure in emerging European countries, demand for blood and blood products is estimated to surge in hospital settings. Presence of various norms to control and manage efficient use of blood components will limit segmental size over the forecast years.

Major associations such as International Federation of Red Cross and Red Crescent Societies (IFRC), American Association of Blood Banks (AABB), Welsh Blood Services, NHS Blood and Transplant (NHSBT) and the Northern Ireland Blood Transfusion Service are among top European players operating in blood and blood components market. These associations have implemented certain strategic initiatives such as collaborations, mergers and expansion strategies that have enhanced their financial stability and helped them evolve as major industrial associations. For instance, in October 2018, NHS Blood and Transplant announced the opening of a new blood donor centre in Leicester with an appeal for 5,900 donors, thus stimulating geographic presence.

Blood and blood components industry witnessed increase in blood donations till 2010. Eventually, various European regulatory bodies observed tremendous usage and wastage of blood and its components during transfusions. Additionally, numerous blood transfusion-associated infections were identified such as Hepatitis B, Hepatitis C and Human Immunodeficiency Virus (HIV) infections. Such incidents lead to formation of guidelines for optimum utilization of blood. Such restricting trends in the market is leading to decline of blood and blood components industry size and the trend is forecasted to continue over the foreseeable future. However, growing number of surgeries, trauma cases and increasing applications of blood components will influence year-on-year demand for these products.