Electronic Stability Control System Market size estimated at over USD 27 billion in 2018 and will grow at a CAGR of 8% from 2019 to 2025. The global industry shipments are expected to reach 95 million units by 2025. 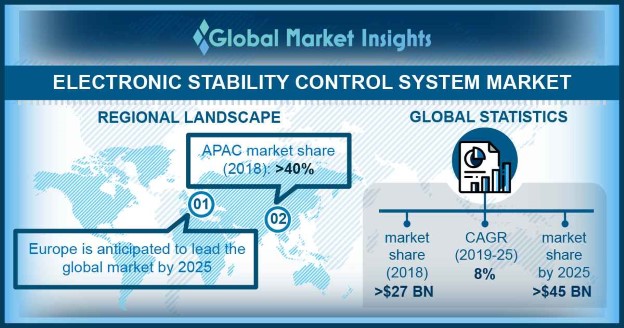 The developments in vehicle safety systems have gained traction with growing customer awareness and government regulations, propelling the electronic stability control system market. Australia, Japan, New Zealand, Russia, South Korea, Turkey, Canada, the European Union, and Israel have made the electronic stability program mandatory and is expected to soon become compulsory in Argentina. According to the National Safety Council, around 40,000 people died in the U.S. due to car crashes in 2018 whereas around 4.5 million people were seriously injured. The global safety report from the World Health Organization states that the annual road traffic deaths have reached around 1.35 million. These factors have made automotive manufacturers to implement a greater number of safety features in vehicles.

Customers in developed nations are highly inclined toward more safety features, adding to the growth of the electronic stability control system market. The electronic stability control systems provide an effective way to improve vehicle stability by detecting the reduction in the traction of wheels. It also determines the loss of vehicle control and applies the brakes automatically to help the driver steer the vehicle. Braking can be applied as per the individual wheel requirements. The ability of these systems to prevent oversteer (when a car turns farther than the driver intended) or understeer (when a car moves forward without turning) is expected to influence the industry.

Passenger cars will contribute to a larger share in the automotive stability control system market. Electronic systems and features have become prominent in passenger cars owing to the increasing demand for safety in developed nations particularly in North America and Europe. The passenger cars sales have also increased over the years in developing nations, further adding to the demand. According to the European Automobile Manufacturers Association, more than 80 million passenger cars were produced globally in 2017.

The growth in the purchasing power of people and implementation of automotive stability enhancement systems in a greater number of cars at least as an option is expected to provide high growth potential in the passenger cars segment. Furthermore, the growing safety standards in developing economies will have considerable influence on market growth. For instance, in February 2017, the Indian Ministry of Road Transport & Highways introduced a new regulation for making anti-lock braking system mandatory for all new cars sold in the country from April 2019, which will increase the implementation of stability systems in passenger cars. 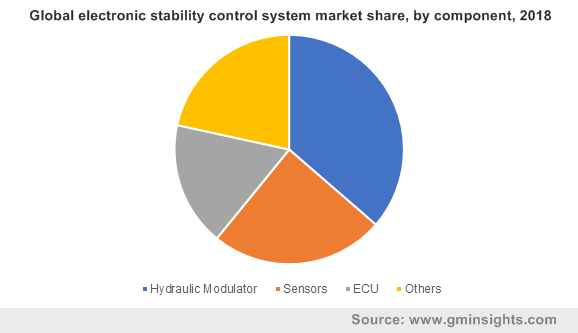 The components used in electronic stability control systems are hydraulic unit and sensors such as steering angle sensor, wheel speed sensor, lateral acceleration sensor, and others. The sensors are a vital part of the stability control system and measure parameters such as speed and direction of rotation of the wheel, brake force required to prevent skidding of vehicle, and others. The wheel sensor offered by Robert Bosch uses Hall technology for generating an alternate voltage, which creates a digital output signal. This sensor is capable of detecting very low wheel speed such as 0.1 km/h. The component suppliers in the electronic stability control system market are focusing on developing more reliable and durable products, which can be easily integrated with other safety systems of the vehicle. 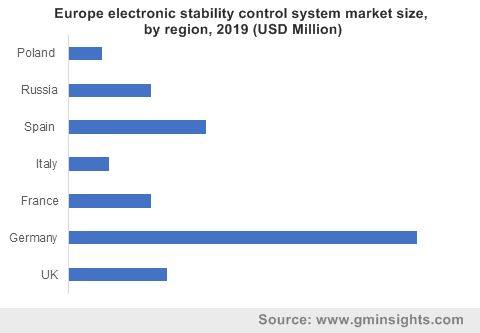 Europe is expected to be one of the key regions owing to strong advancements in the automotive industry and the presence of a large number of premium car manufacturers including BMW, Audi, Mercedes-Benz, Maserati, etc. According to the European Automotive Manufacturers Association, the European automotive industry invests around USD 64.24 billion annually in research & development. A strong focus on innovation has enabled the implementation of a greater number of features in automobiles by European manufacturers, Europe also has mandatory regulation for the implementation of an electronic stability control system in cars and light commercial vehicles, ensuring the demand for the electronic stability control market.

Asia Pacific is another rapidly growing region with over 40% of share in the vehicle assist system market. The growing economic developments in the region resulted in the growth of the automotive industry. According to the International Organization of Motor Vehicle Manufacturers, in 2018, Thailand and Malaysia witnessed 9% and 12.2% growth in automotive production respectively. Manufacturers are implementing stability control features in lower-priced mid-range cars, such as Maruti Suzuki Ciaz, Ford Figo Titanium, Datsun Go+, Hyundai Venue, and Volkswagen Polo. In September 2018, the Ministry of Road Transport and Highways of India announced that electronic stability control systems will be made mandatory on Indian cars between 2022 to 2023. In October 2017, 12 major Chinese car brands announced that they will be implementing electronic stability control systems on all new models from January 2018.

ZF Friedrichshafen, Robert Bosch GmbH, Autoliv Inc., Continental AG, Hitachi Automotive Systems Ltd., Johnson Electric, and WABCO are some of the leading players in the electronic stability control system market. The manufacturers are inclined toward strengthening the product portfolio and expansion in manufacturing capabilities. In September 2018, ZF Friedrichshafen announced that it is expanding its safety system product offerings as well as manufacturing capacity in India to cater to the growing demand for safety systems in the country. The companies are integrating traction control systems and Anti-lock Braking System (ABS) with the electronic stability control system. Robert Bosch offers the system to improve vehicle safety in multiple critical driving situations.

The advancements in automotive electronic systems and developments in sensor technologies have given a significant boost to the implementation of a greater safety system in automobiles. Premium car manufacturers, such as Mercedes-Benz and BMW, are among the early automakers who implemented these systems in their car models, Mercedes-Benz S-Class and BMW 7 series. Robert Bosh and Continental AG are among the first in manufacturing vehicle dynamic control systems. These systems are also offered in different names from different brands such as electronic stability program by Audi, advanced traction by General Motors, stability management by Porche, etc.

The increasing developments by automotive manufacturers to provide comfort features and growth in purchasing power of people created a higher growth potential in the electronic stability control system market. Several brands, such as Toyota, Ford, Volkswagen, Maruti-Suzuki, and Hyundai, are now offering these systems in their car models.

The market size of vehicle tracking device in 2018 exceeded 18,984 thousand units with a industry value of over USD 600 million.
The industry share of electronic stability control system is estimated to grow at a CAGR of over 8% from 2019 to 2025.
According to the analysts at GMI, the global industry shipments are expected to reach 95 million units by 2025.
Customers are increasingly looking for more safety features when making their automobile purchased, which is subsequently impelling automakers to integrate electronic stability control systems in their vehicles.
Given the shifting consumer preferences, particularly in developed regions like Europe and North America, passenger vehicles are expected to contribute the most for market revenue growth in the coming years.
Europe is expected to make significant contributions to industry expansion due to several advancements in its automotive industry and strong presence of numerous premium car makers like BMW, Mercedes-Benz, Audi, and Maserati in the region.