Electric Ships Market size was valued at over USD 3 billion in 2019 and is estimated to grow at a CAGR of more than 8% between 2020 and 2026. The market growth is attributed to the rapid adoption of electric ships by various cargo, passenger, and defense sectors. 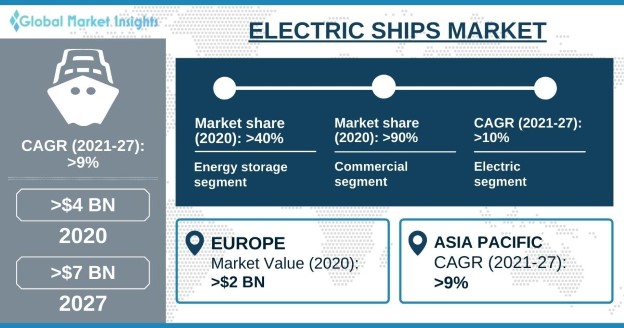 Major developed countries are investing in development of various power sources for the shipping industry in order to align themselves toward the goal of reducing carbon emission. The development in a complex power train and more efficient semi-conductors will support the industry growth of electric ships.

The market will experience a moderate slowdown in 2020 due to recent COVID-19 pandemic. Global trade limitation, temporary shutdown of manufacturing facilities, and reduction in fund allocation towards R&D activities are major reasons limiting the growth. The retro fit segment will experience accelerated growth after conclusion of COVID-19 pandemic to cater demand to resume operations in shipping industry.

The hybrid ships will dominate more than 90% of the market share by 2026 on account of their abilities to operate on both power sources, electric as well as conventional. This has resulted in more efficient and reliable source of operation, catering to the industry expansion.

The 140m long cruise ship can accommodate 530 guests and is built to sail in extreme conditions. The ship features integration of battery packs, allowing it to be 20% more efficient compared to the conventional ships. The ships plan to conclude three extreme expeditions including Antarctica by 2021. 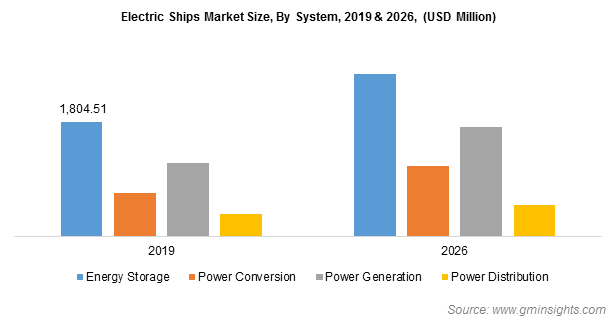 The power distribution segment to witness growth rate of around 7% through 2026. Ability to draw power from various sources and effectively channelize it across the vessel improve efficiency of the ship and reduce emission will drive the segment growth. Conventional-powered distribution systems are required in big vessels, which have complex mechanisms. Various industry participates are targeting small vessels operation on electric or hybrids source, establishing a new market space.

Increasing investments and collaboration towards development of electric ships

The manned electric ships market in Asia Pacific region is poised to expand at more than 7% CAGR by 2026. Continuous efforts made by various corporate, educational and government organizations towards development of electric/hybrid ships will support the market. For instance, in April 2020, a collaborated effort of South Korea’s Ministry of Oceans and Fisheries, Korea Research Institute of Ships & Ocean Engineering and University of South-Eastern Norway will be placed towards development of fully electric ferry. The project is set at the value of USD 21.9 million.

Defense organizations across the globe are engaged in increasing their naval defense capabilities to safeguard their borders. Properties, such as stealth operation and low maintenance, along with being ecofriendly in nature will support the market progression of electric ships in the defense segment. Industry participants are engaged in development of electric-hybrid ships exclusively for Navy.

The line fit segment within the Europe market captured 8% of the revenue share in 2019 and is expected to expand at a CAGR of 11% during 2020 and 2026 led by the rising efforts of companies to develop new electric/hybrid ships and set records to gain confidence of customers. The ship operates on large battery packs and features a specially designed ice-strengthened hull which allowed the vessel to carry such operation. The second ship is slated to be launched by 2021.

The Asia Pacific electric ships market is anticipated to grow at a CAGR of 7% by 2026 due to the efforts taken by various government, corporate, and educational bodies toward technological development of electric ships. For instance, in January 2020, the SM Group of Korea signed a Memorandum of Understanding (MoU) with Korea Maritime University for development of electric ships. The MoU will serve as a bridge between corporate bodies and educational institutions, allowing them to focus on developing ships as per the market demand.

The North America market accounted for over 20% of revenue share in 2019. Efforts by regional defense bodies to increase automation in naval ships will fuel the industry progression. Various programs released by the government to facilitate research & development toward automation of ship are positively augmenting the market revenue.

MoUs and agreements for data sharing and increasing market transparency

The companies operating in the market are signing Memorandum of understanding (MoU) and agreements to share crucial data, which will increase transparency in the shipping industry and increase operational efficiency of ship operators.

The electric ships market research report includes in-depth coverage of the industry with estimates & forecast in terms of revenue in USD from 2017 to 2026 for the following segments:

The market size of electric ships was exceeded USD 3 billion in 2019.
The industry share of electric ships is anticipated to grow at a CAGR of over 8% between 2020 and 2026.
According to the analysts at GMI, the hybrid ships segment will dominate the market with around 90% share by 2026.
Ability to draw power from various sources and effectively channelize it across the vessel to improve efficiency of the ship and reduce emissions will allow the power distribution segment to observe over 7% growth from 2020 to 2026.
The Asia Pacific market revenue is slated to grow at over 7% CAGR till 2026 due to efforts taken by various government, corporate, and educational bodies toward technological development of electric ships.
The manned electric ship segment in Asia Pacific is estimated to expand at more than 7% CAGR during the forecast timeframe.