Distribution Lines And Poles Market size was valued over USD 80 billion in 2018 with annual installation of distribution lines set to exceed 4 million circuit kilometers by 2025. 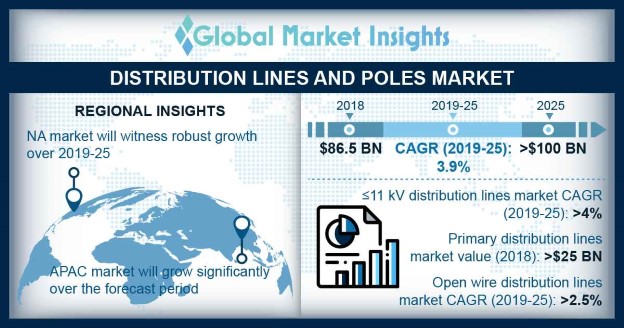 Surging electricity demand on account of rapid increase in the population will drive the global distribution lines and poles market growth. In addition, growing efforts by policy makers to electrify remote areas of their respective nations will boost the industry growth in coming years. For instance, in November 2018, African Development Bank (AfDB) approved a fund of USD 200 million to finance the Nigeria Electrification Project (NEP) for rural electrification.

Rising investments to revamp aging power supply infrastructure will expand the distribution lines and poles market size. According to the U.S. Department of Energy, over 60% of power delivery poles in the country were installed in between 1940 to 1970 which require refurbishment. Furthermore, growing integration of renewable energy sources into the grid will necessitate additional supply infrastructure, thus positively impacting the business growth.

The ≤11 kV distribution lines market size is anticipated to grow over 4% by 2025. Growing penetration of residential consumers driven by rapid increase in population will stimulate the demand for LV connections, which in turn will propel the industry growth. For instance, number of residential consumers for the Australia based utility company Energex has witnessed a growth of nearly 8% between 2014 and 2018.

The 11-33 kV distribution lines and poles market will witness growth on account of ongoing investments toward development of commercial centers. According to the Brazilian Association of Shopping Centers, number of shopping malls in the country has reached to 563 in 2019, witnessing a growth of over 43% from 2009. Moreover, growing need for Heating, Ventilation, and Air Conditioning (HVAC) equipment will further accelerate the deployment of these products.

Primary distribution lines market size, in 2018 was valued over USD 25 billion. Growing legislative focus toward industrialization and commercialization has led to a rapid escalation in number of primary consumers, which in turn will drive the industry growth. In 2018, the Government of India has introduced the draft National Policy on Electronics (NPE) envisaging creation of a USD 400 billion electronics manufacturing industry in the country by 2025

Secondary distribution lines market will grow on account of rising population in addition to the government efforts to achieve maximum electrification. For instance, the Government of Tanzania has introduced Sustainable Development Goal-7 to ensure affordable and sustainable electricity access to most of its population by 2030. Additionally, growing inadequacy of aging grid infrastructure along with increasing consumer requirements will further drive the industry growth.

Open wire distribution lines market size is anticipated to expand over 2.5 % by 2025. Lower capital cost, ease of installation with lesser maintenance are the key parameters that will drive the product demand. Additionally, ongoing rural electrification programs across the developing economies will further boost product installation.

Aerial Bunched Cable (ABC) distribution lines market is set to witness growth on account of the product’s high reliability, better adaptability, extensive current carrying capacity and safe operation. Growing urban population has led to a highly congested landscape of major cities, necessitating the need for a compact and safe alternative to open overhead lines, which in turn will influence the deployment of ABCs.

Steel distribution poles market size is anticipated to surpass an annual deployment of 30 million units by 2025. Long service life, light weight, high strength and standard quality are the key parameters that will accelerate the product penetration across the industry. In addition, other factors including minimal terrestrial biome disturbance, easy recyclability, lower life cycle cost and uniform dimensions make the product adoption preferable over its available counterparts.

North America distribution lines and poles market will witness robust growth on account of soaring investments toward modernization of the existing electricity supply networks which are susceptible to natural disasters. For instance, as per the U.S. Energy Information Administration (EIA), spending on electricity distribution system in 2017 reached USD 51 billion, witnessing a growth of over 30% in one decade. Additionally, growing frequency and intensity of natural disasters will further require replacement and repair of distribution lines and poles across the region, thereby impacting the business landscape. 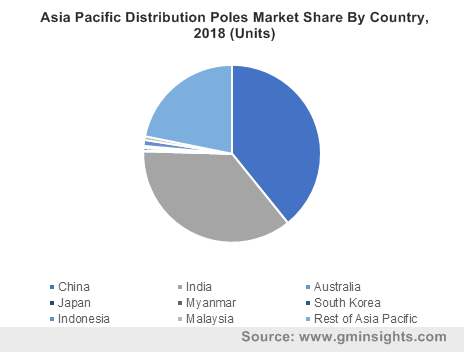 Asia Pacific distribution lines and poles market will witness an appreciable growth owing to ongoing investments in power grid infrastructure to cater the soaring energy demand driven by surging population growth. For instance, in 2015, the Government of China announced investments worth USD 315 billion toward the development and modernization of transmission & distribution infrastructure in a timespan of five years. Additionally, growing purchasing power of consumers along with ongoing efforts toward rural electrification will impact the business growth.

Inorganic growth ventures, and backward and forward integration are some of major strategies followed by the leading players. In addition, extensive investments toward technology-based R&D to develop economic and energy efficient products have been opted by the manufacturers to gain a competitive edge in the business landscape.

The primary purpose of distribution lines and poles is to distribute the electrical energy to end users after receiving it in bulk from transmission or sub-transmission substation. Distribution voltages usually range from 120 V to 66 kV, depending on various factors including regional preferences and consumer type. The selection of these poles varies regionally, largely determined by their availability of raw material and economic feasibility in the region.