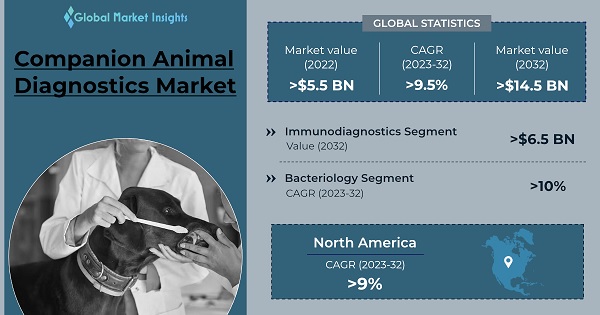 However, low out-of-pocket expenditure on pet healthcare in developing countries such as India and other countries in Latin America & Asia may hamper the market growth. Lack of awareness regarding various insurance policies offered by public and private organizations for companion animal health and animal diagnostic tests are some other factors that may slow down the market expansion. Also, the pet insurance penetration rate in emerging countries is comparatively lower than the developed nations.

The global healthcare sector has been impacted due to the COVID-19 pandemic and the slender effects of the coronavirus outbreak may continue in the near future. The impact of COVID-19 on companion animal diagnostics peaked during early 2020 wherein, the customers opted for animal diagnostic test kits for ensuring the well-being of the owned animals. Other challenges such as interrupted delivery services, hindrance in diagnostic testing, changed protocols related to the handling of highly infectious samples, among others have impeded the industry growth. As a result, the market witnessed a slow growth in the early 2020. The pandemic has showcased the significance of companion animal diagnostics as a response to surging viral diseases and their importance in promoting animal health.

Rising pet adoption for companionship has led to increase in spending on animal health that is expected to drive the industry expansion. The number of pet animals adopted broadly for companionship has surged significantly in the last few years. For instance, as per the recent article, the pet adoption rate in China was 19.9% for cats and 11.8% for dogs in 2018. China is the 3rd largest pet population nation across the globe following Brazil and the U.S. Pets are largely adopted in developed countries such as the U.S. and Europe mostly by aged individuals for companionship. The growing use of pets in films and ad campaigns have increased the conviction of pet adoption across the globe. Nowadays, there has been a change in drift from pet owners to pet parents that exhibit pets are accepted as a part of the family. Growing disposable income and high spending on animal healthcare has led to the demand for advanced companion animal diagnostics services, thereby fueling the market demand positively.

The immunodiagnostics segment captured 23% of revenue share and was valued at more than USD 625 million in 2020. Immunodiagnostics technology uses the property of certain antibodies to precisely bind to an antigen of interest, enabling specific, accurate, and time-saving approaches in the diagnosis of infectious ailments in companion animals. Rising pet adoption worldwide along with favorable initiatives for the use of good diagnostic products for better animal health is slated to spur the demand for companion animal diagnostics instruments. For instance, in 2020, the UK government announced the budget to redevelop specialist research and diagnostic laboratory facilities for animal health science. The U.S. government launched Feed the Future initiative, providing training to public and private animal health workers and invested in the development of the animal healthcare system in the U.S. Furthermore, the preference for immunodiagnostics tests for companion animal diagnostics is increasing due to the growing demand for early disease diagnosis, developments in immunoassay formats, and surging preference for in-house testing. Hence, market players are focusing to develop species-specific raw materials that aid the development of reliable immunoassays for animals. 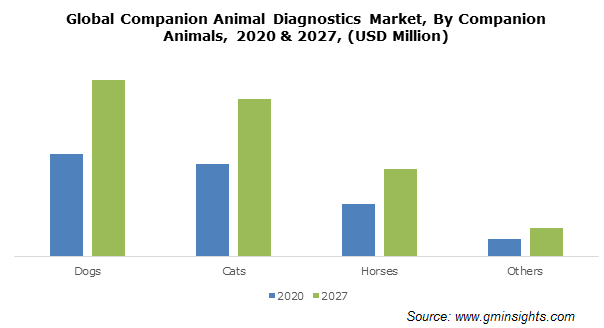 The dogs segment accounted for around 38% of the companion animal diagnostics market share in 2020 led by the rising adoption of dogs for companionships and the surging awareness regarding animal health. The COVID-19 pandemic also resulted in higher pet adoption as compared to previous years and the acceptance rate soared amidst lockdowns, also, the growing prevalence of zoonotic diseases among dogs led to the increasing demand for diagnostic services for dogs. 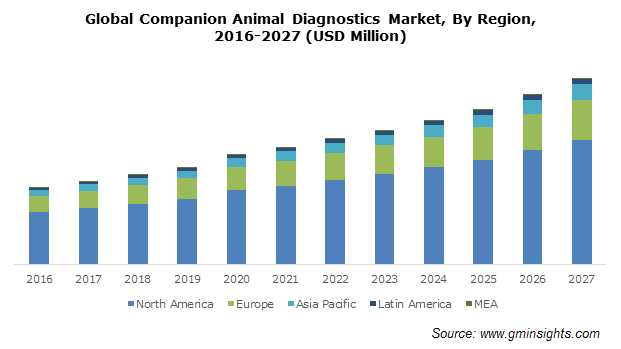 The U.S. dominated the North America companion animal diagnostics market with a significant share in 2020 and will to reach USD 2.99 billion by 2027 owing to  the multiple factors such as rising pet adoption, high spending on animal health in the region, and frequent introduction of novel products in the market. According to the APPA National Pet Owners Survey, around 67% of the U.S. households own at least one pet as of 2020. As per the American Pet Product Organization, in 2020, the total money spent on pets was around 103.6 billion in the U.S. In 2020, IDEXX Laboratories announced the launch of Rapid Digital Cytology service to accelerate its veterinary healthcare business. Hence, high pet population coupled with high veterinary care expenditure and launch of innovative products in the country is promoting the demand for companion animal care products including companion animal diagnostics.

Germany market will capture USD 173 million by 2027 on account of the growing prevalence of numerous zoonotic disorders, growing pet adoption for companionship, and favorable government initiatives among others.  The increasing prevalence of zoonotic disorders in dogs comprising brucellosis, campylobacteriosis, and dermatophytosis among others in the country is predicted to promote the demand for companion animal diagnostics tools. The Germany government has employed numerous initiatives pertaining to Animal cruelty to strengthen animal welfare in the country. These initiatives adopted by both government and private organizations including World Organisation for Animal Health are further estimated to upsurge the industry demand.

Some of the major companies operating in the market are IDEXX Laboratories, Abaxis, Heska Corporation, Neogen, Zoetis, Thermo Fischer Scientific, Randox, and Qiagen among others. These prominent participants focus on strategic partnerships, new product launch & commercialization for business expansion. Moreover, these business leaders are also investing in research and development activities that allow them to garner maximum revenue share.

Companion animal diagnostics market research report includes an in-depth coverage of the industry with estimates & forecast in terms of revenue in USD from 2016 to 2027, for the following segments:

Market size was valued at USD 2.7 billion in 2020 and will expand at a CAGR of 8.2% from 2021 to 2027.
Immunodiagnostics accounted for a valuation of over USD 625 million in 2020 and will exhibit appreciable growth owing to the surging pet adoption at the global level.
Diagnostic services for dogs recorded around 38% of the market share in 2020 and will grow with increasing adoption of dogs for companionships and the rising awareness associated with animal health.
U.S. market is slated to reach a value of USD 2.99 billion through 2027 due to numerous factors such as increasing pet adoption, frequent introduction of novel products, and high expenditure on animal health.
Customize this Report
Inquiry Before Buying