Commercial Satellite Launch Service Market size exceeded USD 6 billion in 2019 and is poised to grow at a CAGR of over 7% between 2020 and 2026. The market growth is driven by increasing requirement to submit payloads in the outer space in line with conducting various experiments.

Efforts taken by major industry players to increase the affordability and regional penetration of satellite launches will augment the market growth. For instance, in November 2018, Amazon and Lockheed Martin entered a strategic partnership to provide ground station services for satellite startups. This enabled both companies to innovate their technologies and expand market share. 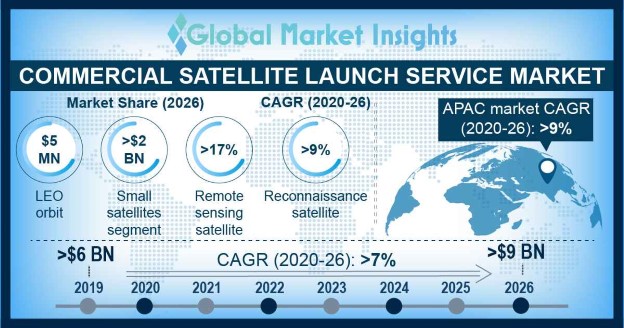 Plans of major countries to support and incubate small technology start-ups within the space vertical to gain technological competitiveness is a major market revenue accelerator. For instance, in August 2018, the ISRO announced its plans to set up space incubators to offer start-ups with advanced information and solutions related to communication, remote sensing, and rocketry, thereby contributing significantly toward the industry expansion.

The commercial satellite launch service market size will experience a moderate dip in 2020 owing to the coronavirus (COVID-19) pandemic. The temporary lockdown of various design, development, and manufacturing facilities with limited operational launch stations is limiting the market growth. Sluggish global economies with a major focus on fighting the pandemic will also negatively impact the market demand.

In North America, the GEO segment will witness a growth rate of more than 4% during the forecast timeframe. The growth is attributed to efforts taken by the industry players to establish a wide range of communication and navigation networks that capable to provide internet service to vast areas. For instance, in January 2020, Astrains and GapSat plan to launch smallsat GEO satellites to form a space constellation covering a large geographical area to significantly improve communication and navigation networks. Both companies plan to initiate the launch by 2021.

The Europe medium-sized commercial satellite launch service market valuation will cross USD 1 billion by 2026, growing at more than 7% CAGR. Various research centers backed up by government funding are forming a consortium to increase their pace of development. For instance, in 2020, fourteen European companies and institutes formed a consortium, the European Union (EU) Horizon 2020. The consortium will focus on the design of low-cost launchers capable of carrying a payload up to 50kgs.

The reconnaissance satellite segment size was over USD 2 billion in 2019 and is predicted to register gains at more than 9% through 2026. Increasing efforts of regional governments to strengthen their information sources through space surveillance will fuel the market growth. Various organizations are organizing multiple satellite launch services where satellites of more than one nation are launched in space from a single vehicle.

These collaborations significantly improve the operational efficiency of an aircraft, reducing the overall cost of a launch. For instance, in December 2019, India launched RISAT 2BR1, an all-weather reconnaissance satellite along with nine other customer satellites across 567-kilometer orbit.

The Asia Pacific commercial satellite launch service market will account for over 30% revenue share by 2026 due to increasing efforts of Asia Pacific countries to gain indigenous manufacturing capabilities. A range of startups is acquiring investments to accelerate their R&D and manufacturing capabilities. For instance, in April 2018, Beijing LandSpace Technology Corporation Limited secured an investment of around USD 35 million in a funding round to support its technological advancements and improve satellite launch services, propelling the industry growth.

Patent registration and generation of property offerings are among the primary strategic initiatives practiced by prominent companies operating in the market. For instance, in September 2018, Vector, a microsatellite launch player received a U.S. patent for liquid oxygen propylene rocket engine that will significantly improve the engine performance over traditional fueled engines.

The market research report on commercial satellite launch service includes in-depth coverage of the industry with estimates & forecast in terms of revenue in USD from 2015 to 2026 for the following segments:

The market size of commercial satellite launch service was exceeded USD 6 billion in 2019.
The industry share of commercial satellite launch service is poised to grow at a CAGR of over 7% between 2020 and 2026.
The Asia Pacific market will account for over 30% revenue share by 2026 due to increasing efforts of Asia Pacific countries to gain indigenous manufacturing capabilities.
According to the analysts at GMI, the GEO segment in North American market will witness a growth rate of more than 4% during the forecast timeframe.
Major players in the market are Ariane Group, GK Launch Services, Lockheed Martin, United Launch Alliance, Commercial Space Technologies Ltd., ISRO, NASA, Antrix Corporation Limited, COSMOS International, Sea Launch, Boeing, Orbital Sciences Corporation, SpaceX, Eurockot Launch Services, and Mitsubishi Heavy Industries Launch Services.