Catheters Market size surpassed USD 19.9 billion in 2021 and is projected to register over 9.6% CAGR between 2022 and 2028 owing to the technological advancement in manufacturing and development of advanced catheters for interventional surgeries. Increasing prevalence of cardiovascular disorders along with growing global geriatric population base is anticipated to impel the business growth during the analysis period. 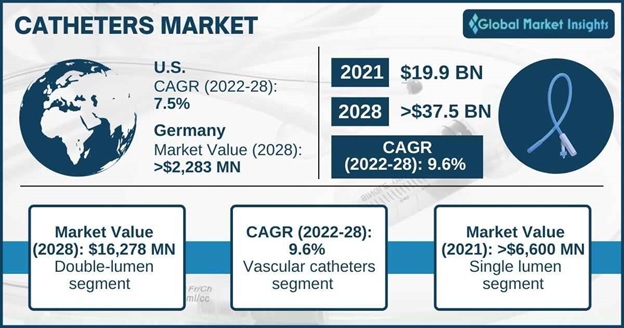 Industry players are focusing on developing efficient, precise, and cost-effective catheters that would help to fuel the catheters market share during the estimated time period. Such catheters are assisting to cut-off the time required for hemostasis and prevent blood loss after the interventional surgery. The rise in the number of patients suffering from chronic diseases has promoted the use of catheters and is anticipated to drive the market growth in the near future.

Furthermore, the growing elderly population, rising prevalence of cardiovascular illnesses, and related interventional procedures have increased demand for technologically advanced products. Increasing use of these innovative products is offering a faster diagnostic procedure and early discharge to the patient. These products are improving patient comfort and decrease significant surgical complications such as bleeding and vascular thrombosis.

Catheter is a medical equipment that is inserted into the body for therapeutic purpose or management of diseases or during a surgical procedure to facilitate outflow of bodily fluids or intake of medications.

However, the high cost of advanced catheters may hamper industry growth. Increasing number of patients suffering from cardiovascular and chronic diseases such as urinary bladder, renal failure, coronary heart disease, etc. needs novel catheters for catheterization procedures. However, due to costly catheterization procedures of these diseases the adoption rate of catheters may decrease across low-income nations.

The high costs of these devices and essential accessories may act as a restrain for the market growth. Because of the high costs associated with catheterization treatments, market expansion in developing economies with comparatively low-income levels may be limited. Thus, middle and low-income countries may find it difficult to adopt such high-priced products. Hence, the high cost of these advanced products might hamper the catheters market growth during the estimation timeframe.

The ongoing COVID-19 pandemic had a partial negative impact on catheters market during the first quarter of 2020. During the COVID-19 pandemic, there was a decline in the frequency of emergency and general visits connected to cardiovascular disorders, that influenced product acceptance to some extent. There was a significant setback in surgeries of cardiac, neurological, and urology diseases. As per the report published in March 2020, there was a spurn in endovascular therapy by 32% in over 8 countries across the globe.

However, with the rising number of patients suffering from cardiovascular diseases, the number of procedures will continue to increase again. Various international government authorities have revised certain guidelines to ensure maximum safety of the patients as well as healthcare professionals in treatment of chronic diseases and care management. Despite lower patient admissions in 2020, the decreasing number of COVID-19 cases and a large proportion of the population suffering from chronic illnesses are expected to boost the catheters market sales in the forthcoming years.

Rising geriatric population is one of the major concerns in developing countries globally. Additionally growing prevalence of chronic diseases in geriatric patients such as aortic disease, venous thromboembolism, peripheral arterial disease, etc. is set to propel the catheters market growth in an estimated timeframe. According to an article published by the Centers for Disease Control and Prevention, in 2020, over 19.1% of the global geriatric population aged 55 to 65 years was suffering from peripheral arterial disease, out of which around 27% were men and over 21% were women. Asia Pacific has the highest number of geriatric population, and the numbers are surging at an unprecedented rate.

For instance, according to a news article, Japan and Italy are the countries with highest geriatric population accounting for around 28% and 23% of the total population in respective countries. Moreover, according to the World Health Organization (WHO), the percentage of individuals aged 60 years and above in the population is growing. In 2019, the number of people aged 60 years and older was 1 billion, it is expected to rise to 1.4 billion by 2050. Hence, the increasing aging population at an unprecedented pace will accelerate the catheters market revenue in the coming years.

The growing demand for these innovative devices is primarily owing to benefits such as the low procedural cost, fewer post-operative complications, and minimum nursing care time that is anticipated to augment the segmental growth in the near future. As per the research article published by the BMC Nephrology, in 2019, the use of vascular catheters was around 54% globally. Vascular catheters are also one of the prominent devices in the treatment of various cardiovascular disorders.

According to the European Society of Cardiology, cardiovascular conditions are one of the leading causes of mortalities in Europe accounting for around 45% of the overall deaths. Therefore, the demand for efficient, quick, and effective vascular catheters for vascular catheterization is projected to propel significantly.

Based on lumen, the catheters market is segmented as single-lumen, double-lumen, triple-lumen, and others. The double-lumen segment is anticipated to reach at around USD 16,278 million by 2028. Double-lumen catheters are widely used for various medical applications in intravenous surgeries. These double lumen catheters are mostly made of polyethylene or polyurethane that are easy to use and can be implanted directly during surgeries providing independent access to the venous circulation.

Double lumen catheters help to inject two incompatible fluids or drugs at the same time. It offers several benefits including providing the optimal balance of flexibility and durability. According to a survey report published by the National Center for Biotechnology Information (NCBI), majority of the double lumen catheters were used for hemodialysis. The double-lumen catheters are part of a comprehensive series of critical care catheters used to drain bodily fluids from body cavities or to dilate body channels.

Several market players are emphasizing to manufacture technologically advanced double-lumen catheters to gain a competitive advantage over their peers. These devices are highly preferred for continuous catheterization procedures. Thus, numerous advantages offered by double-lumen devices are set to accelerate the catheters market during the estimation timeframe. 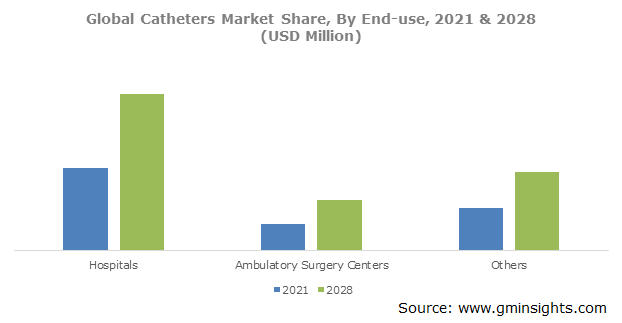 Based on end-use, catheters market is segmented as hospital, ambulatory surgical centers, and others. The hospital segment is anticipated to expand at 9.6% CAGR through 2028 due to the increased adoption of catheters and hospitalizations associated to complex interventional surgeries. The rising adoption of catheters devices is due to the enhanced post-surgical care thereby surging patient preference for hospitals.

Further, the rise in the incidence of vascular & urological diseases, prostate cancer, heart disease, and neurological diseases coupled with availability of highly skilled medical and healthcare professional are some of the driving factors for the catheters industry statistics.

Furthermore, the emphasis on health infrastructure development in emerging countries will result in the establishment of a wide hospital network, that will increase product acceptance rate in the near future. Thus, a large patient pool and increasing hospital admissions are expected to fuel the catheters market growth in the estimated analysis timeframe.

U.S. catheters market is anticipated to expand at 7.5% CAGR during 2022-2028 period. This high revenue share is primarily attributable to factors such as increasing prevalence of urinary disorders, renal failure, and high number of skilled surgeons among others. For instance, according to the reports published by the Center for Disease Control and Prevention (CDC), every 1 in 7 adults is suffering from chronic kidney diseases that is estimated to be over 37 million people in the U.S.

Some of the major market players operating in the catheters industry are Abbott Laboratories, Boston Scientific Corporation, Johnson and Johnson, Coloplast, B Braun, Teleflex Inc., and Medtronic Inc. among others. These major players are adopting various business strategies such as, commercial expansion, new product development & commercialization, distribution agreements for business expansion. Moreover, these players are investing heavily in developing products.

Catheters market report includes an in-depth coverage of the industry with estimates & forecast in terms of revenue in USD and volume in ‘000 Units from 2022 to 2028, for the following segments:

The global catheters industry generated over USD 19.9 billion in revenue in 2021 and is poised to record close to USD 37.5 billion by 2028 due to the rising technological advancements in the production and development of advanced catheters for interventional surgeries.
Catheter is primarily medical equipment inserted into the body for therapeutic purposes, like the management of diseases and during surgical procedures to facilitate the outflow of bodily fluids or the intake of medications.
Demand for double-lumen catheters is likely to cross USD 16,278 million by 2028 driven by rising usage for various medical applications in intravenous surgeries.
The catheters industry share from hospitals is anticipated to witness a 9.6% CAGR through 2028 owing to the rising number of hospitalizations associated with complex interventional surgeries.
Customize this Report
Inquiry Before Buying