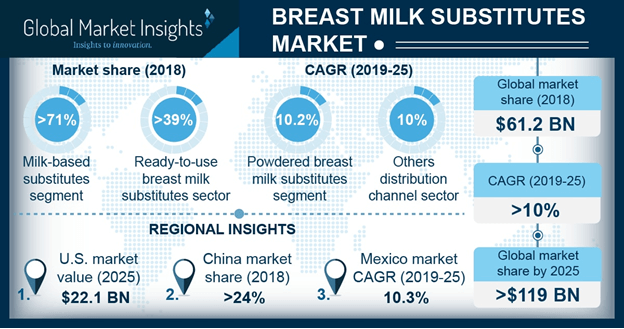 Increasing number of working women in developed and developing countries will be the major factor driving breast milk substitutes market growth. Rising initiatives to drive women education and empowerment is stimulating increase in the working-class women, especially across the low and middle income nations. Busy work schedules do not favor breastfeeding and may act as hindrance to the baby’s growth. Hence, numerous women prefer infant formula to achieve sub-optimal development and growth of the baby, that will highly impact breast milk substitutes market growth over the forthcoming years.

Milk-based substitutes market accounted for more than 71% market share in 2018. Consumption of milk-based substitutes has increased over the period as cow/goat milk supplements breast milk’s nutritional qualities to the babies. Cow milk is fortified with vitamin D and calcium, benefiting whole body growth along with bone development of the baby. Additionally, milk-based infant formula contains vitamins, minerals, vegetable oils and iron for the infant growth. Thus, milk-based substitutes being the most commonly adopted substitute type will dominate the industry throughout the forecast years.

Hypoallergenic formula market accounted for USD 1.9 billion market size in 2018. Hypoallergenic breast milk substitutes are basically protein hydrolysate formulas recommended for infants unable to tolerate cow milk or soy-based formulae. According to the American Academy of Pediatrics, prevalence of milk protein allergy among infants is about 2 to 3%. Hypoallergenic formula contains hydrolyzed proteins that may partially or extensively hydrolyze into smaller sizes than found in cow milk or soymilk, thus helping the infants with allergies. Hence, rising prevalence of eczema, food allergy and asthma should boost segmental growth over the coming years.

Others distribution channel segment including e-commerce platforms, baby stores and few other channels is estimated to grow at robust 10.0% CAGR over the forecast timeframe. Increasing internet penetration in the developing economies is boosting convenience as well as preference for products sales through online channels. Moreover, emergence of specialty and convenience stores such as Mom and baby stores coupled with distribution of breast milk substitutes through special supplemental nutrition programs will offer lucrative segmental growth in the forthcoming years. 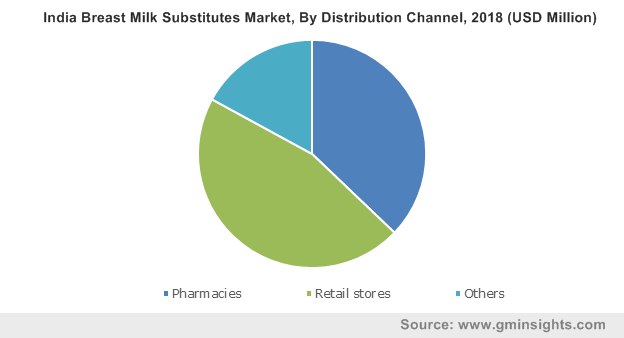 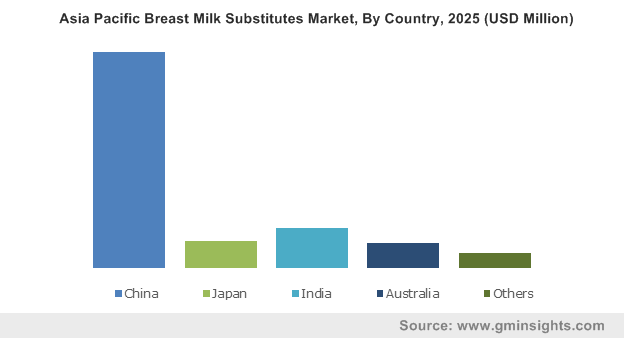 Nestle, Danone, Abbott Nutrition, Mead Johnson (Reckitt Benckiser) and Kraft Heinz among others are some of the key industry players operating in the global breast milk substitutes market. These players are implementing several strategies to gain competitive advantage over its competitors, such as marketing strategies, acquisitions and partnerships. For instance, in February 2017, Mead Johnson announced its acquisition by the Reckitt Benckiser Group that allowed expansion of Reckitt Benckiser’s product portfolio by including Mead Johnson’s Enfa and Nutramigen product lines.