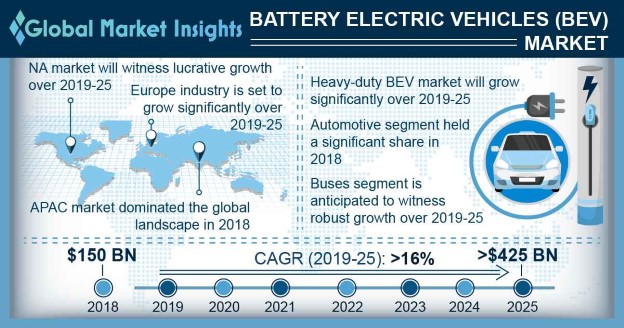 Supportive government policies and regulations pertaining to the increasing usage of alternative fuels to power automobile are expanding the battery electric vehicles market size over the forecast timeframe. In 2016, the Canadian government introduced the Clean Fuel Standard, that enables industry players to use a wide range of green fuels, including electricity, hydrogen, and other renewable fuels for powering vehicles, thereby reducing carbon emissions considerably.

Continuous focus of the government on reducing the dependence on conventional fuel automobile and improve issues related to environmental pollution will drive industry growth. For instance, the California government announced its plans to deploy around 5 million zero emission vehicles on road by 2030 and around 250,000 electric vehicle charging stations by 2025. Further, the government also aims to cut down on greenhouse emissions by around 40% below the 1990 levels by 2030. Ongoing initiatives will drive the market over the study timeframe.

The increasing prevalence of greenhouse gases and carbon emissions across the globe are forcing governments to take stringent steps and introduce policies to curb pollution levels significantly. Rising automotive production along with the availability of extensive public transportation across the region based on conventional fuels further contributes towards increasing pollution levels significantly.

High vehicle cost will restrict the market demand over the study timeframe. The implementation of advanced technologies, including fast charging and water proofing for improved vehicle performance in diversified climatic conditions, contribute significantly toward increasing the overall vehicle cost. Additionally, costs associated with the prototyping, testing, and compliance to stringent government regulations prior to commercialization further increase the vehicle cost significantly. 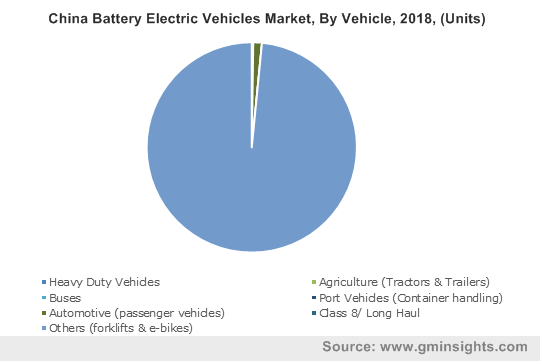 Heavy duty battery electric vehicles market size will witness significant growth with installation of economical lithium-ion batteries and improving charging infrastructure. Government subsidies have made electric heavy-duty vehicles an economical alternative for buyers as compared to traditional trucks. The vehicles offer lower maintenance and running with efficient electric powertrains. China, Europe, and North America will account for more than 70% sales of the heavy-duty vehicles over the study timeframe.

Automotive segment holds significant share in the market with uptake of electric passenger cars driven by the policy environment. Government organizations are introducing policies to phase out conventional internal combustion powered cars by 2030. The policies and incentives offered by governments have been instrumental in making electric cars more appealing to customers and encouraging manufacturers to scale up the production.

The replacement of internal combustion engines with battery electric in the public transportation system will drive bus segment penetration over the forecast period. Regulatory authorities across the globe are committing emission reduction targets for transportation, especially in the public transportation sector. They are creating incentive programs and grants for transit companies, bus contractors, and school districts to finance the upfront cost of electric buses and the charging infrastructure. 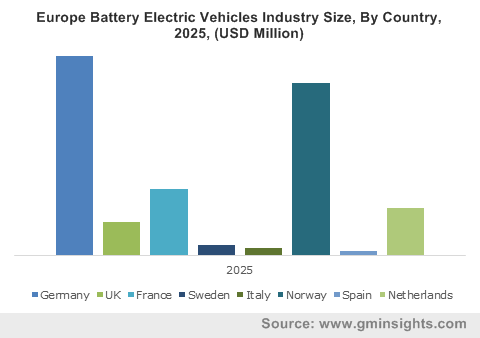 Asia Pacific leads the battery electric vehicles market size owing to the increasing deployment of zero emission trucks and cars. Strong presence of battery manufacturers in the region coupled with supportive government subsidies and tax incentives are bolstering the industry growth. Increasing demand for environment friendly means of transportation over the region is resulting in gradual electrification of heavy-duty trucks. Growing emphasis for reducing the carbon footprint and increasing air quality are providing a positive outlook for battery electric vehicles.

Battery electric vehicles adoption is highly dependent on supporting infrastructure and incentives. Industry will witness significant growth with emergence of charging infrastructure. According to China Electric Vehicle Charging Infrastructure Promotion Association, in 2019, the number of charging stations rose to over 400,000 in China.

Government organizations including Ministry of Ecology and Environment (MEE), Society of Automotive Engineers (SAE), Automotive Research Association of India (ARAI) are taking initiatives for support the adoption of electric vehicles. For instance, Indian government approved USD 1.4 billion scheme to subsidize the sales of electric vehicles under the Faster Adoption for Manufacturing of Hybrid and Electric Vehicles (FAME) scheme.