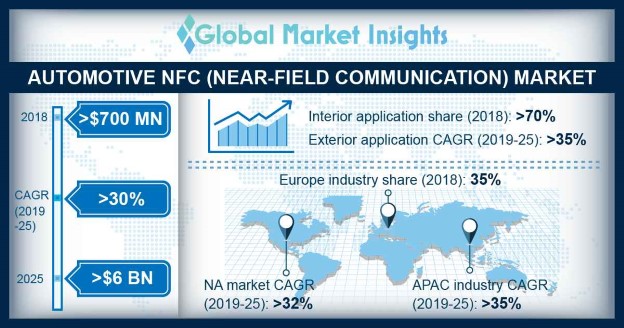 The increasing number of government regulations mandating the use of Advanced Driving Assistance Systems (ADAS) has been influencing the usage of NFC technology in automobiles. The ADAS systems include features such as autonomous emergency braking system, electronic stability control, lane departure warning, anti-lock brakes, and adaptive cruise control. These smart driving features generate high amounts of high definition data through LiDAR devices & cameras fitted to scan the external environment. This high-definition data needs to be transmitted & processed in real-time to drive the need for high-speed communication technologies. The NFC devices provide a cost-effective, safe, and efficient alternative for all the data transmission needs of smart driving applications in vehicles, spurring the growth of the automotive NFC market.

In the past decade, smartphones have been used for conducting various activities remotely ranging from conducting financial transactions across retail outlets to managing & controlling various household smart devices. The presence of various in-built connectivity technologies such as NFC, Bluetooth, and Wi-Fi have allowed smartphones to provide a connected experience for users. The automotive industry has also been leveraging on smartphones’ communication capabilities to provide drivers with a personalized & seamless driving experience. The automotive manufacturers are using NFC tags and readers pre-installed in smartphones to configure & customize the in-car accessories, such as infotainment systems and air condition systems, to provide access to their cars and its ignition systems.

The 212 Kbit/S automotive NFC market is expected to grow at a CAGR of over 30% during the forecast time period. The 212 Kbit/S NFC tags have been extensively used in various mid-range and high-end automotive as they provide optimum data transmission speeds to automotive electronic components. The companies are focusing on increasing the memory capacity of 212 Kbit/S NFC tags, which has enabled the creation of a wide range of 212 NFC devices with its inbuilt memory ranging from 96 Kbytes to 1 Mbyte. These products provide read access control and write access control functionalities to prevent any unauthorized access emanating through external sources. The 212 Kbit/S devices are gradually losing their market share to 424 Kbit/S NFC tags as they are offering higher data transmission rates.

The 106 Kbit/S automotive NFC devices attained a CAGR of over 16% during the projected time period due to its high degree of compatibility with other automotive components. The automotive NFC tags with 106 Kbit/S speeds have been widely used in the lower end automobiles as their electronic components require lower data transmission speeds. The OEMs and automotive suppliers are constantly working to increase the storage capacity of 106 Kbit/S NFC tags. These memory enhancement efforts are focused on increasing their use in various sophisticated applications and add new security functionalities, promoting their adoption in various advanced automotive functionalities.

The mid-range vehicle segment in automotive NFC market will grow at a CAGR of 37% during the forecast timeline due to the increasing adoption of luxury car features in the mid-range car segment, which is attributed to the rising need for personalization in various mid-range vehicles. The automakers are providing drivers with in-built vehicle personalization features such as infotainment system (sound and display configuration), setting of air condition, lights, and target destination. The lower power consumption of the NFC technology is another aspect, promoting the incorporation of NFC technology in mid-range vehicles. 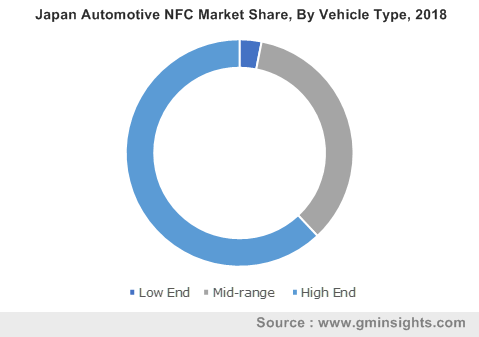 The low-end automotive NFC market will grow substantially during the forecast timeframe. As the demand for high-end vehicles in increasing at a rapid pace particularly in countries such as China and India due to the rising per capita income in the emerging economies, low-end car manufacturers are operating in these regions are intensifying their efforts to provide drivers with a connected driving experience. The lower end car manufacturers are leveraging on NFC technology across various smart device offerings to allow users to establish a connection between users and cars.

The interior application held over 70% share in the automotive NFC market in 2018. The interior market includes infotainment system, air-conditioning, engine access, and ADAS communication interfaces. The NFC technology is extensively adopted in various automotive components ranging from low-end to luxury cars. The technology simplifies the pairing mechanism, reducing the overall response times and the number of processing cycles. The inexpensive nature of the technology has been helping its incorporation across various automotive segments. Moreover, the technology requires lower power consumption and has enhanced compatibility with a wide range of interior automotive accessories, promoting its usage across various third-party manufacturers, OEMs, and automakers. 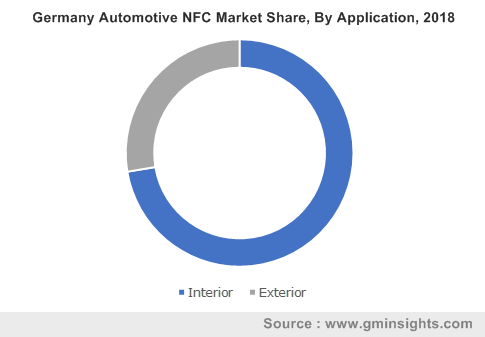 The Europe region dominated the automotive NFC market with a industry share of approximately 35% in 2018. This is attributed to the presence of various large auto manufacturers, such as BMW, Audi, and Mercedes, increasing investments aimed at accelerating innovations in the automotive NFC landscape. The higher sales volume of premium cars also has been adding to the growth of the market. The road safety bodies operating in the region have also introduced regulations mandating the incorporation of ADAS systems in cars, promoting the use of NFC technology in automobiles.

The Asia Pacific automotive NFC market will attain a CAGR of over 35% during the forecast time period due to the increasing sales of luxury vehicles, particularly in China and India. The gradually rising per capita income in economies including India and China has further spurred the size of the market. The availability of several cost-effective third-party automotive accessories, such as in-car infotainment systems, has supported the incorporation of NFC technology in low-end vehicles. In addition, the presence of stringent government guidelines mandating the use of ADAS solutions is expected to increase the usage of NFC technology in cars across the region. For instance, in September 2017, the Government of India passed a regulation mandating all the heavy vehicles and passenger cars to be fitted with ADAS systems, which can automatically apply brakes if it suddenly detects any objects on the road.

The automotive NFC market is dominated by large players such as NXP Semiconductors, Sony, Samsung, STMicroelectronics, and Continental. The OEMs are forming partnerships with automakers to solidify their position in the market. For instance, in February 2017, NXP Semiconductors, an automotive chipmaker announced that it formed tie-ups with five automakers to incorporate NFC communication technology for its door handles, allowing drivers to access their cars through their smartphones. The companies in the market are working with select smartphone device manufacturers, such as Samsung and Apple, to develop a digital key system compatible with their smartphones.

The NFC technology is being viewed as a key enabler for a multitude of advanced in-vehicle functions. It has been commonly used for communication support, interaction between a customer and a vehicle, information retrieval, and car key access based on NFC interface. Some for the key trends influencing the automotive NFC market are increasing the adoption of smartphones, rising the demand for personalization in luxury vehicles, government regulations mandating the use of ADAS systems, and the growing proliferation of IoT in cars.

The market size of automotive NFC crossed USD 700 million in 2018.
The industry share of automotive NFC is anticipated to grow at a CAGR of more than 30% from 2019 to 2025.
The Asia Pacific market will attain a CAGR of over 35% during the forecast period due to increasing sales of luxury vehicles across the region.
The 212 Kbit/S NFC tags are increasingly being used in multiple high-end and mid-range vehicles as it offers optimal data transmission speeds to automobile electronic devices.
Europe industry is driven by the rich presence of international automobile companies like Audi, Mercedes, and BMW, as well as by large-scale investments made in the automotive NFC sphere.
NFC technology has found its way into low-end as well as luxury car segments owing to its ability to simplify the pairing mechanism, the number of processing cycles and lowering the overall response time.
Customize this Report
Inquiry Before Buying