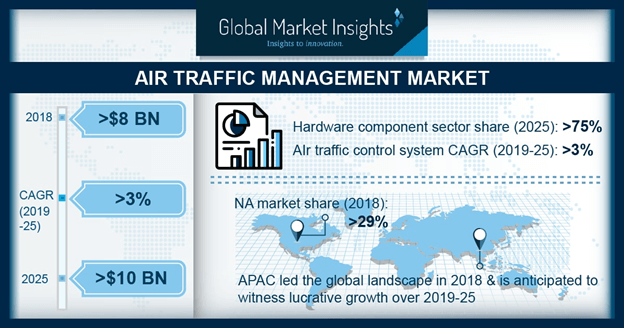 The increasing consumer spending in conjunction with shifting preferences toward air travel will drive the air traffic management market revenue during the projected timeframe. The rising investments from Asia Pacific and the Middle East for the new airport’s development and upgrading of existing airports in North America and Europe are propelling the market share. According to the International Air Transport Association (IATA), air passenger traffic is bound to cross 7 billion by 2035 with a yearly growth of over 3.5%. The airport authorities of developed regions are focusing on upgrading the existing airport infrastructure with new air traffic management systems to provide more efficient air traffic services. The Asia Pacific and the Middle East & Africa regions are investing in new airport developments and focusing on regional connectivity. The rise in passenger and cargo movement will increase the demand for new airports and their upgrading in this region.

Increasing investments in airport upgrades in developed regions of North America and Europe have led to a high demand for traffic management solutions. Moreover, due to this, there is a demand for brownfield investments in the aerospace industry. For instance, in 2017, Seattle-Tacoma Airport in the U.S. started its expansion program by investing USD 1.6 billion. The upgrading plan included baggage handling systems, redevelopment of the center runway, new terminal, and expansion of the existing terminal building. Sudan in 2018 started the development of New Khartoum Airport and the project is estimated to cost over USD 1 billion and is expected to be completed by 2021.

The ongoing initiatives by tourist countries to develop airport infrastructure will help the industry grow. For instance, in 2018, Greece invested in the new airport named Kastelli International Airport. The projected is estimated to cost more than USD 500 million. In 2018, the Australian government started the project for a new airport in Western Sydney. The project is estimated to cost around USD 5 billion and will be completed in various phases. 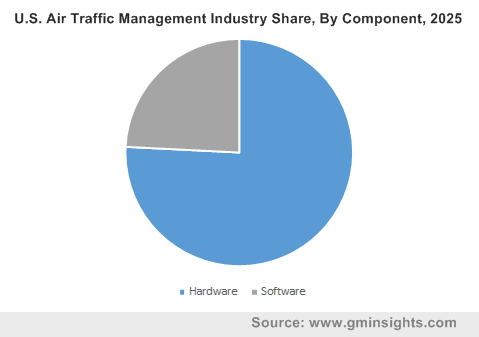 Air traffic control segment leads the air traffic management market share due to the rising passenger traffic and the introduction of new airlines. The demand for more advanced communication and navigation system is fueling the growth of ATC. For instance, in January 2019, NATS installed AI-powered digital control tower at the Heathrow Airport. The major focus of this control tower is to reduce flight delays.

The introduction of the remote and virtual tower is acting as one of the major drivers of the growth. Countries including India and China are focusing on regional connectivity and remote towers, providing cost-efficient solutions for ATM services. For instance. in June 2019, India got a new Centralized Air Traffic Flow Management (C-ATFM) system that will optimize the utilization of resources and cut down on flight delays by coordinating with the aircraft through real-time conditions.

In 2018, North America accounted for over 29% share due to the presence of multiple air traffic management system providers. The increasing modernization programs for existing airports in the U.S. and Canada will support the market demand. For instance, in 2018, the U.S. will have over six airports that will complete their upgrading including Boston, Denver, Texas, Chicago, Louisiana, and Tennessee. Further, technological progression and rising automation will enhance the air traffic management market growth by 2025. 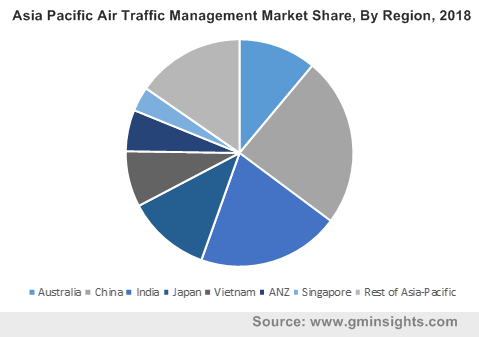 Major players in the market are focusing on strategic partnerships and mergers with other companies and government authorities to increase their market share. For instance, in June 2018, the Honeywell announced its collaboration with the Airport Authority of India (AAI) to voice recognition software for upgrading the air traffic management system across the region. The software will help pilots and air traffic controllers to eliminate the communication problem caused by varying accents. In 2019, the Lockheed Martin was selected by FAA to provide En Route Automation Modernization (ERAM) as a prime contractor and Raytheon as a subcontractor contributing to the design and development of the critical flight and surveillance data processing subsystems. The company will also join Raytheon’s Standard Terminal Automation Replacement System (STARS) to provide its technical expertise during the development phase.

Air traffic management provides aircraft flow management, aeronautical information management services, communication services, weather forecast services, and other air traffic management services to airlines that are in or traveling to that airport. The system helps in managing the air traffic flow of an airport. The ATM system is one of the most crucial components of any airport system. With the introduction of electronic flight strips, virtual tower integrated with image enhancement, and night vision camera, the efficiency of airports has increased.

The increasing consumer spending in conjunction with shifting preferences toward air travel will drive the market revenue during the projected timeframe.
In 2018, North America accounted for over 29% industry share due to presence of multiple air traffic management system providers.
The hardware component will account for over 75% of the market share by 2025 with the introduction of new airports and rising digitalization in the existing airports.