Aerospace Sealants Market size valued at USD 740 million in 2019 and is estimated to exhibit 4.5% CAGR from 2020 to 2026. Rising aircraft production and a positive outlook from the aircraft MRO industry are showcasing significant market growth potential. Aircraft manufacturers are continuously investing in technologies and new materials for reducing their aircraft weight. Moreover, market players enter into strategic partnerships and joint ventures with aircraft manufacturers for offering sealants based on their requirements.

The market is characterized by stringent regulatory policies and environmental norms. Industry players are continuously investing and improving their products to meet the stringent norms and gain airworthiness approvals. 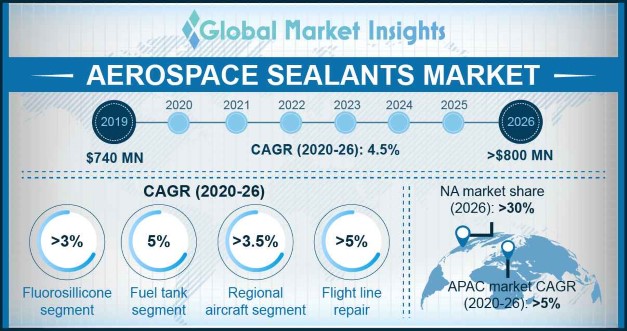 Proliferating demand for air travel owing to increasing low-cost carriers will be the major factor fueling the aerospace sealants demand. Low-cost carriers have played a major role in boosting the aviation industry significantly. The de-regularization of domestic aviation markets in several economies has given significant opportunities to airliners to offer market-oriented services. Furthermore, the lower ticket costs owing to the provision for limited additional and value-added services are likely to attract customers to opt for such airlines.

COVID-19 has severely impacted the operations of the global airline industry. Most of the countries across the world have temporarily suspended their domestic and international air travel in order to control further pandemic outburst. According to IATA, the global airline industry has already incurred a loss of over USD 300 billion and it might further increase in the coming financial quarters. It has negatively influenced the production and delivery of new orders as well as aircraft repair and maintenance activities. However, the market is expected to recover and will steadily grow from 2021 onwards.

Polysulfide to dominate the chemistry segment

Flight line repair to be the fastest-growing application

Aerospace sealants market from flight line repair application will witness highest growth rate of over 5% till 2026. The requirement for regular checks and inspections for aircrafts prior to initiating take-off is supporting the market growth.

The aircraft fuel tank is a key component for repair activity as the leakages occur at aircraft access panels occasionally. During the repair of integral fuel tanks, fuel is transferred or stored in another tank, which enables the removal of panels and replacement of seals. The increasing need for maintenance of an aircraft owing to rising air traffic passengers across the world will create demand for flight line repairs.

Commercial aircraft will be the major consumer 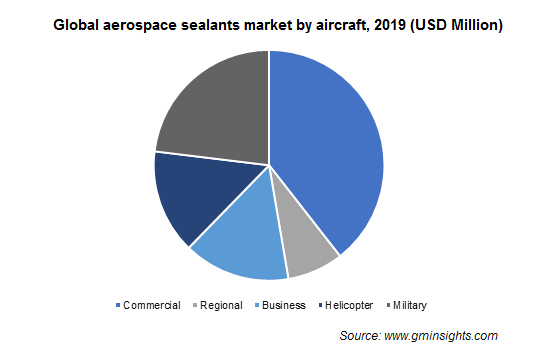 The commercial aircraft segment is expected to account for more than 1/3rd market share during the forecast timeframe. Increasing production and delivery of commercial aircraft will be the major factor driving the segment growth trends. Development in spending power of the middle class populace in developing countries, shifting trend towards air travel and the increasing popularity of low-cost air carriers has boosted the global air traffic in the last few years and will positively influence the market demand.

OEM distribution channel to have a noteworthy contribution

The aerospace sealant market from the OEM distribution channel exceeded USD 290 million in 2019 ascribed to rising demand for commercial aircraft across the globe. Rising global air traffic has fueled the aircraft production activity and will be the chief factor prospering the consumption of aerospace sealants in the OEM segment.

Asia Pacific will be the key market 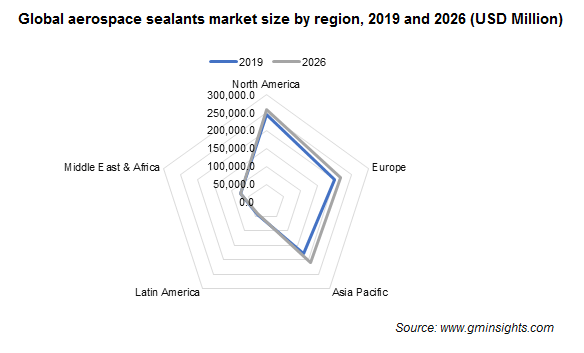 Industry players are continuously investing in advancing their sealant products to gain a competitive edge. For instance, in January 2017, PPG announced the launch of its updated PR-2870 corrosion inhibiting chrome-free sealant with a reduced 48-hour assembly & application time for complex and large aircraft structures, and over 70% faster curing compared to the traditional sealants.

This market research report on aerospace sealant includes in-depth coverage of the industry with estimates & forecast in terms of volume in kilo tons and revenue in USD million from 2016 to 2026, for the following segments:

The market size of aerospace sealants was exceeded USD 740 million in 2019.
The industry share of aerospace sealants is poised to exhibit over 4.5% CAGR between 2020 and 2026.
Asia Pacific market will be the fastest-growing and is likely to expand at over 5% CAGR from 2020 to 2026 as robust economic development coupled with increasing air travelers in the region has increased the demand for commercial aircraft.
According to the analysts at GMI, the commercial aircrafts will hold more than 1/3rd of the total industry share till 2026.
Major companies in the market are PPG Industries, Flamemaster Corporation, 3M Company, Chemetall GmbH, Dow Corning, Royal Adhesives & Sealants, Permatex, Henkel, Cytec Industries, Master Bond, and Anabond Limited.
Customize this Report
Inquiry Before Buying