Global Traction Battery Market size surpassed USD 30 billion in 2017 and is set to expand at over 11% CAGR through 2024. Favorable economic growth across the emerging economies along with shifting focus toward electric forklift will stimulate the global industry statistics. These are increasingly being deployed by the material handling industry, owing to their high efficiency and environment friendly than ICE forklifts. 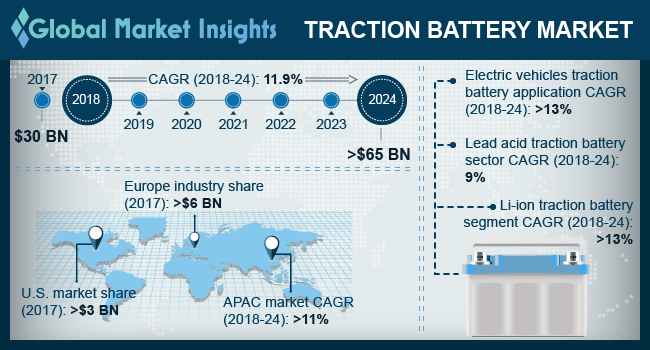 Growing demand for electric vehicles driven by electrification of the transport sector will stimulate the global traction battery industry growth. The industry is primarily driven by favorable government policies and tax incentives to promote EV’s. In addition, sharp decline in battery costs and rising investments by major automakers in battery technology will further support the market trends. The largest automotive manufacturer, Tesla, in its Gigafactory in the U.S., plans to increase its annual battery production capacity to 35 GWh by 2020.

Lead acid segment of traction battery market is predicted to achieve over 9% CAGR through 2024. Higher cyclability, lower price and high resistance to vibration are some of the key features that will accelerate the penetration of these batteries across the global industry. Lead Acid offer reliable and robust power source for applications including electric vehicles, forklifts, golf carts, floor scrubbers, and e-bikes.

Li-Ion based traction battery industry demand will witness a robust growth of over 13% up to 2024. The industry growth is attributed to the sharp decline in costs and high charging efficiency. In addition, these batteries on account of their high energy density and design characteristics will continue to gain dominance over lead acid across electric vehicles applications. Furthermore, its rapid adoption in e-bikes outside China and high power to weight ratio, makes it suitable for battery electric vehicles.

High gravimetric and volumetric energy density when compared with available counterparts makes Ni-MH, more suitable for HEV’s. Higher power density, design characteristics and capability to operate at normal ambient temperatures are some of the key underlined parameters which will encourage the product adoption. Around 70% of the hybrid electric vehicle globally are equipped with Ni-MH battery, thus creating a positive outlook for the traction battery market growth.

Electric vehicles segment of the traction battery market is projected to achieve more than 13% CAGR up to 2024. Strengthening government policies along with growing concerns to reduce GHG emissions, will stimulate the business outlook.The growth across the business is primarily attributed to the government led tax incentives and ambitious targets announced by electric automakers to promote EV’s across the developed countries.

Rapid industrialization along with changing consumer preference toward electric forklifts will foster the industrial segment of the market. The burgeoning industry expansion is significantly attributed to escalating ecommerce business activities along with the indispensable use of electric forklifts to enhance efficiency and sustainability of businesses operations.

The U.S. traction battery market will witness significant growth on account of the invariable need to electrify the transport sector along with federal mandates, purchase incentives, and objectives pertaining to energy efficiency & carbon emissions. For instance, the U.S. government introduced tax incentives of USD 7,500 for BEV and PHEV cars purchased in and after 2010. In addition, shifting consumer preference toward electric forklift across the material handling industry will further stimulate the product penetration.

Europe traction battery market share exceeded USD 6 billion in 2017 and will witness lucrative growth on account of increasing adoption of EV sales driven by stringent goals to decrease the carbon emission contributed by the automotive sector. The recent announcements to ban conventional petrol and diesel cars in France and the UK by 2040 will enhance regional growth rate, thereby creating significant growth prospects for the industry.

Asia Pacific market is set to witness over 11 % CAGR through 2024. Favorable policy adoptions and growing concerns to curb the emission levels contributed by the automotive sector will stimulate the APAC market outlook. The growth in the region is attributed to the increasing investments across major battery manufacturing countries including China, Japan, and South Korea. In India, government led initiatives toward e-mobility and development of adequate charging infrastructure will create new opportunities for the industry players.

Regulatory conformance, price reduction, increasing manufacturing plants capacities to achieve economies of scale, R&D investments in new battery technologies, and product differentiation are the key strategic assets for an industry participant to attain a competitive position in the business.

Traction batteries are used to power electric vehicles including electric cars, buses, bikes, forklift trucks, electric golf carts, and riding floor scrubbers. It is generally designed to have a high capacity to weight and volume ratio to carry the vehicle’s power source. These are generally deep-cycled and requires a fast charging rate for its use, usually within 24 hours.

Traction battery market research report includes in-depth coverage of the industry with estimates & forecast in terms of USD from 2013 to 2024, for the following segments: